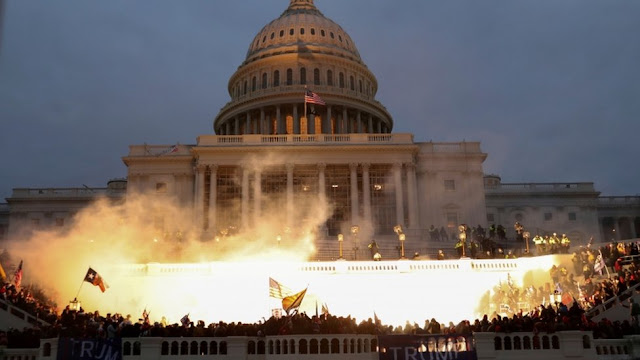 It happened. I suppose it was inevitable. Ginned up by the president himself, Trump's white supremacist extremists and election fraud delusionists laid siege to the Capitol on Wednesday. When it was done, five people were dead, including a Capitol Police officer. At a rally immediately before the mob stormed the Capitol, Trump had exhorted his cult of followers—who call him their "God Emperor"—to "stop the steal" by marching to where Senators and House Reps were at that very moment counting electoral college votes to certify the Biden-Harris win. Like all of you, I watched the violence and mayhem with my jaw on the floor. Members of Congress were whisked out of the House and Senate chambers as armed rioters were breaking down the doors, shattering glass with crowbars, endangering the lives of men and women who were only doing the people's business. No one, absolutely no one, failed to notice how law enforcement handled these white insurrectionists with kid gloves. News anchors contrasted their mild response to the paramilitary violence unleashed on peaceful Black Lives Matter protestors last summer, including on that day when Trump wanted to hold a Bible aloft for a photo op.

At the height of the siege, one officer even pointed two rioters in the direction of soon-to-be Senate Majority Leader Chuck Schumer's office. They didn't find his office, but their cohorts found House Speaker Nancy Pelosi's office, where they posed for pictures with their feet on her desk, going through her mail and her laptop. Hours later, when the building had finally been secured, Congress returned to its ransacked chambers and finished the job of certifying Joe Biden and Kamala Harris as the next American president and vice-president. They were determined not to let insurrectionists stop them from doing what the law prescribed, though more than one hundred Republicans, led by Josh Hawley and Ted Cruz, still objected to the votes as being illegitimate.

Of course, their objections were completely performative, with no basis in law or possibility of success, staged only to appease the cult of Trump. Arguably, these Republicans overplayed their hands, which are now bloodied by the dead on their doorstep. This was a dark day for our country. The siege on the Capitol was nothing less than a failed coup, incited by the American president and his henchmen. Whether Trump will escape the consequences of this dastardly act, too, remains uncertain.