And this berry girl 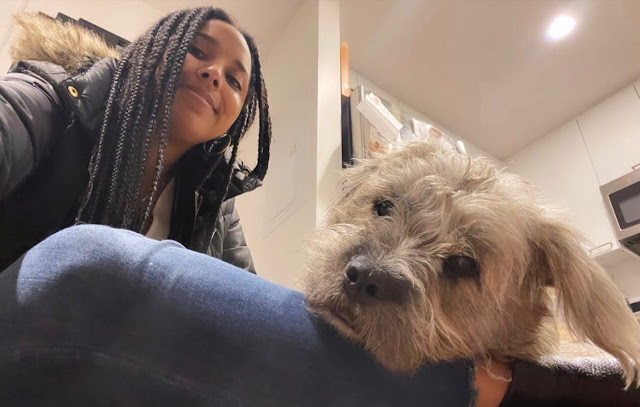 Her caption on this image, posted in IG, was: "Is there anything better than coming home to your dog?" Woman and dog certainly look quite content. My girl and her boyfriend continue to be fairly busy inside their quarantine bubble up there in Cambridge, and I pray they and their cohort group all stay well. Both members of the couple who tested positive for covid before the holiday break are now better, though they both had to stay isolated in campus housing for the entire season, seeing no one, feeling sick and achy. But, fingers crossed, they both seem to have escaped what is now being called "long covid," and are back to their socializing selves.

For my part, I am still mostly staying inside my house and quietly panicking over the proposal I have to write. I have not started, don't know how to begin, and I keep reminding myself that it always feels this way—except maybe this time, more so? I don't know. But this imposter angst is an old, boring story. I'm so tired of it myself.

Far more interesting is the news that my niece, Dani, who's been living with us since she graduated college in May 2019, will be moving to hipster Brooklyn in a week, moving in with a friend, a young woman from Britain who was a housemate when they both did a semester abroad in Australia. This friend now lives in New York, having been hired by American Express to do something very techy, and she was looking for a housemate. They looked at apartments in Brooklyn two weekends ago and a week later had been approved for a two-bedroom, two-bathroom place with floor to ceiling windows, a balcony, and in-unit washer dryer, in a brand new building. This week, they signed the lease.

This New Jersey born, Maryland raised young woman, whose family now lives in Orlando, Florida, is now a bona fide New Yorker. Part of our annual Thanksgiving crew, she says she knew she would move to New York after college since she went Black Friday shopping in the city with her older cousins when she was twelve. My man and I helped her move some of her stuff into her new place yesterday, with the rest of the move happening later this week, once Wifi has been installed. Life changes again.