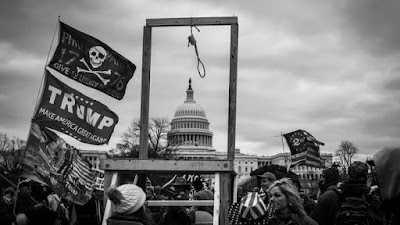 1. The crowd that swarmed into the Capitol last Wednesday, January 6, 2021 (set it down so history will never forget), was chanting "Hang Mike Pence!" That was their rallying cry. Outside on Capitol grounds, a wooden gallows with a prepared noose had already been erected.  Mike Pence was on the Senate floor when the insurrectionists broke windows and breached doors and surged inside. Lucky for him, Secret Service whisked him to safety. Who does Mike Pence think the noose was for? And yet he cannot bring himself to invoke the 25th amendment to remove from office the craven president who incited this threat on his life, simply because he chose to do his constitutional duty to certify the electoral college votes in Congress. I suppose a man who so robotically served a cruel and despicable shell of a president for four years can hardly be expected to be a profile in courage now. 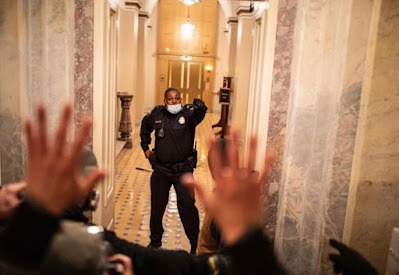 2. We all saw that black Capitol police officer backing up away from the crowd down a hallway, the one who ran up the stairs ahead of the mob, dropped and then retrieved his baton, but did not use it. I know for a fact some people were shouting for him to fight back against the advancing threat, and reading his apparent retreat as weakness. Turns out Officer Eugene Goodman got to the top of the stairs, looked to his left down a short hallway and realized the door to the Senate chamber was wide open and unguarded. Knowing Senators were still in the chamber, he then made the decision to use himself as bait to draw the rioters in the opposite direction. He shoved the rioter at the front of the crowd to aggravate him, ensuring he would pursue and the other rioters would follow. Officer Goodman kept backing up, leading them to away from the Senate and giving our elected officials and their staffs the additional sixty seconds needed to safely exit the floor. Officer Goodman averted a hostage situation and saved lives. He is a hero. 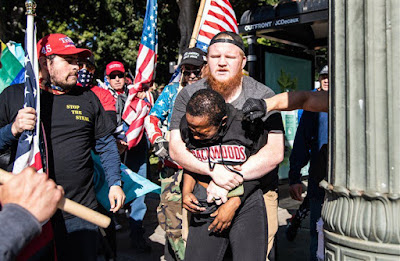 3. You probably saw the photo of the big, burly red headed white man holding a traumatized black woman in a bear hug as a crowd of Trump supporters menaced her. One arm at the right of the picture is at the moment pepper spraying her face. It looked like the man with his arms wrapped around her was part of the mob that had already beaten, spit on, stomped, and brutalized her. It looks so bad that when his employer saw the viral photo, the man was fired. In fact, he had picked up the woman up bodily, yelled for the people around them to back off, and carried her to safety, saying to her, "It's okay, I got you. These people want to kill you. I'm going to get you out of here." Yes, he was there with the mob, likely a Trump supporter himself. But he was where he needed to be that day to save that woman's life. She called his employer and explained that to her, the man was a hero. She got him back his job.