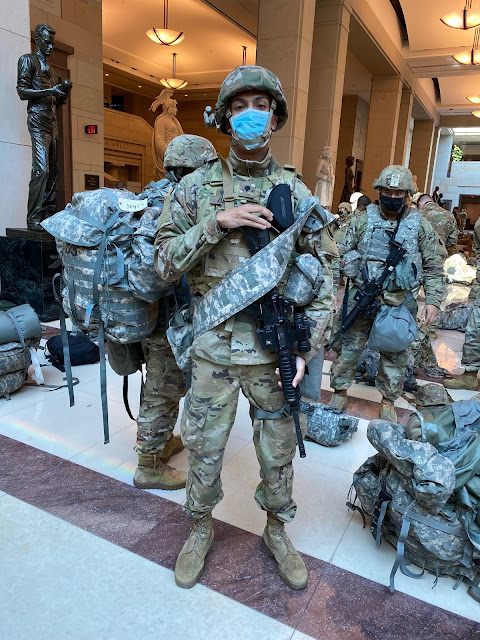 For those of you who have been here with me for a while, this is my nephew, Aunt Winnie's grandson, who for the past two nights slept on the mable floors inside the Capitol with his fellows-at-arms. Some of you met this young man as a little boy in these posts, and followed his sometimes heartrending story. You know he was ultimately secured, and is now a college graduate who after getting his degree in criminal justice a year ago, trained for the National Guard. His goal is to join the Secret Service or US Marshal Service. He's a law and order sort, and ironically may have voted for the other side. Whatever his leanings, I don't want my nephew having to confront any white supremacists trying to burn everything down. To me, he is still a callow youth, nervous and untried. And in the wake of the insurrectionist president's second impeachment yesterday, this political era looks a lot like civil war. Plus, as we all saw a week ago, to the MAGA terrorists, blue lives apparently matter only when those blue lives are threatening Black, Brown or Jewish ones.

The information now coming out about last week's siege on the Capitol is nothing short of shattering. It has emerged that some right wing members of Congress conducted what is being described as "reconnaissance tours" of the Capitol the day before the riot, which was noted because no tours of the building had been given since last March. When Capitol police asked the MAGA paraphernalia-wearing visitors to leave due to covid regulations, the Congress members objected and said as their guests the Trumpers had permission to be on the premises.

Last night, Rachel Maddow showed new video of a woman rioter instructing the mob where to go based on a floor plan they had acquired, Maddow's point being that the riot was more carefully planned than it first appeared. In addition, Colorado's newly elected Q-Anon House member Lauren Boebert, a woman with a criminal rap sheet back home and a husband with a record of exposing himself to minors, was live tweeting Nancy Pelosi's whereabouts in real time to rioters storming stormed the building, a criminal offense that put the Speaker's life in danger. I confess I was skeptical of early reports that the insurrectionists had inside help. My poor little mind couldn't imagine such a betrayal by elected officials who had sworn an oath to protect and serve, even after the past four years. I need to be a little more cynical because it appears that certain members of Congress did in fact give rioters material aid, and some members of the Capitol police, too, have been suspended, and one arrested, for possibly conspiring with the mob. We can only hope all the bad actors will be held accountable.

Oh I could go on, but it's all too much. Besides, it's unfolding on TV every hour, so long as you're watching anything other than Fox New. Suffice it to say, as bad as it was when the mob stormed the Capitol screaming for Mike Pence and Nancy Pelosi's heads, it could have been so much worse. I really wish Joe Biden and Kamala Harris would do a nice little indoor ceremony for the inauguration and call it a day.