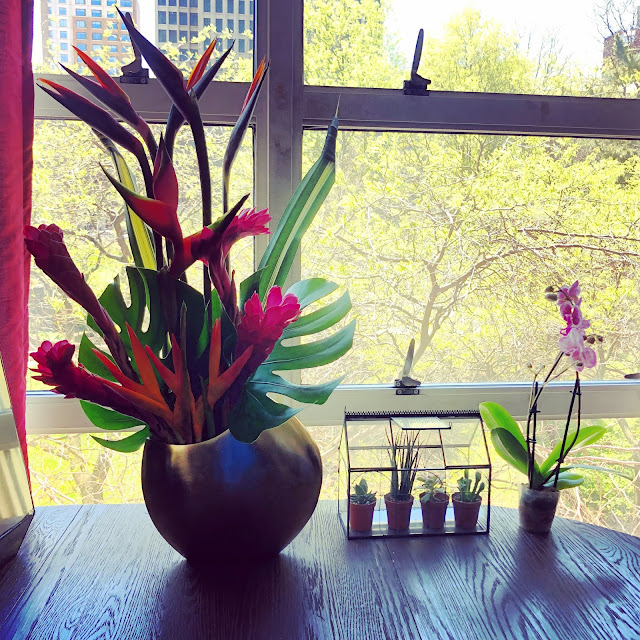 It was the weirdest thing, I wrote and published that last post and then that night, after some comments had come it, it just vanished. Oddly, the comments were still in my queue, but attached now to a ghost post, and I had no idea what had happened. Then, the next morning, the post mysteriously reappeared, but as a draft now, and I wondered if there was anything in it that my guardian god fairies didn't think I should be putting out into the world, because I do think like that sometimes, but in the end I pressed publish again, and there you go.

I'm in a slow cycle, nothing feeling too pressured yet on my currently active projects. I'm mostly just editing stories for the magazine this week and losing myself in reading books, which for so long I had been unable to do, as my attention was too scattershot. I wonder if it was the effect of perpetual exhausting outrage over the orange ectoplasm, mercifully relieved now by the delightfully boring good intentions of the current president. The kickoff meeting for my new book project is later this week, so I'll need to get busy again on that soon, but for the time being, I'm enjoying the sense of being able to meander a bit. The only downside is there's so little to do in New York beyond park activities and sidewalk dining right now, although that is likely to change soon, as more of the city gets vaccinated.

My daughter and her love rented an apartment in Brooklyn for June and July, and I'll be so stoked to have them back in the city. My girl continues to do her job remotely, and he got a summer internship with a New York City finance firm. Even though his job is also remote, he figured it would be good to go into the office occasionally for some face time. Nothing like an in-person connection, especially now that offices are starting to open back up. My niece and her husband in Dallas will be coming to visit at some point, too, so the gang will be together again. My husband confessed that the thing he missed most in quarantine was regular get togethers with our young uns and their significant others. Well it seems the party's back on, though it may be moving to Brooklyn.

The apartment my daughter and her boyfriend rented is in a beautiful building with breathtaking rooftop amenities, and even a pet spa for heaven's sake. My daughter was thrilled at having found it. My son scolded his sister that she'll be spending twice as much on rent as he does every month, to which she replied, "Why can't you just be happy for me?" "I want to be happy for your bank account, too," my frugal son shot back. Without missing a beat my girl responded, "If you want to be happy for my bank account you're welcome to start making monthly cash infusions." He had the grace to laugh. I understand him, though. He is saving for a wedding, after all.

I had a birthday by the way. My husband went down to the flower district the day before and picked up birds of paradise and ginger lilies and made me that beautiful arrangement, and brought home a new orchid, too.