Work and other forms of art 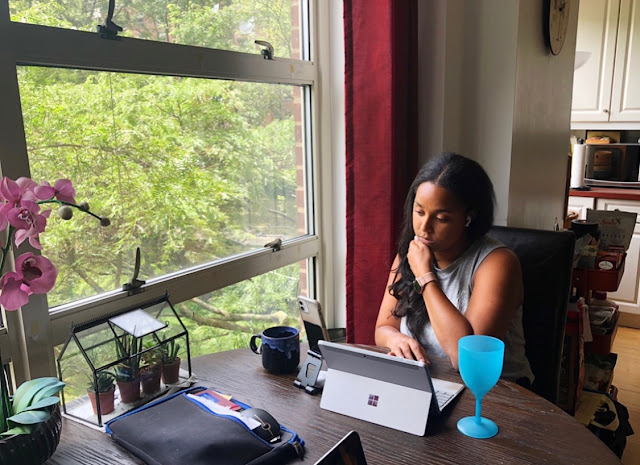 I am sitting in front of the big window doing my work, while listening to my daughter at the end of the table, talking to her coworkers and bosses on an external relations video conferencing call, updating them on the million-dollars in sponsorships she has brought in since their last meeting. She impresses the heck out of me! Who is this accomplished hardworking woman, rattling off fundraising successes while also making sure to thank colleagues who helped make introductions or who otherwise facilitated her wins? I can see why they promoted her from assistant to coordinator to manager in less than three years, and agreed to let her work remotely from Boston while her love is in grad school there. I'd want to keep this one on my team too. 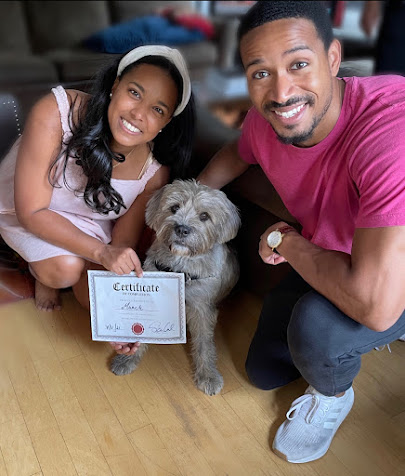 As you've probably gathered, our girl is with us now, our coworker for the week. Her guy and their sweet puppy Munch also spent the weekend here, mostly watching Olympics and vociferously cheering with us. We all have our favorite athletes and events. The twenty somethings packed up their summer apartment on Saturday and my husband helped them cart all their things here, one of their way stations for the month of August before they both head back to Boston for the fall. The photo is of Munch and his paw-rents posing with his doggy school graduation certificate. Apparently, when treats were involved, he crushed his Saturday morning puppy training classes in the park. As his other grandmother said when she saw the picture, "Munch's parents are button-poppin' proud." 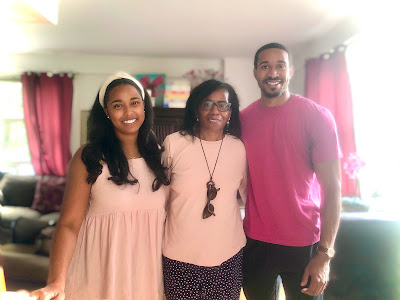 My daughter's sweetheart is now upstate with his mom for a spell, along with one half of their summer belongings, and puppy Munch, too, as my girl will be traveling soon—if her PCR test for covid comes back negative that is. She was lying on the couch watching track and field on Sunday eve when a text came in from a friend she'd had dinner with ten days ago. The friend, though fully vaccinated, had just tested positive for Covid. She had no symptoms, but was doing the responsible thing and contract tracing everyone, after being contact traced herself. My daughter left the house at once to go to City MD for both a rapid test and a PCR test. The line of people waiting to do the same on a Sunday night was around the block—strong first-hand evidence of the Delta variant making itself known.

Our girl's rapid test was negative, so was her boyfriend's. But we are all now quarantined inside waiting for the results of the more reliable second test. I trust it too will be negative, but if it isn't, our girl will have to miss the bachelorette party in Miami this weekend and the cross country trip with her former college roommate next week. As ambivalent as I have professed to be about these plans, I don't want her to have to miss out on these passages with friends. 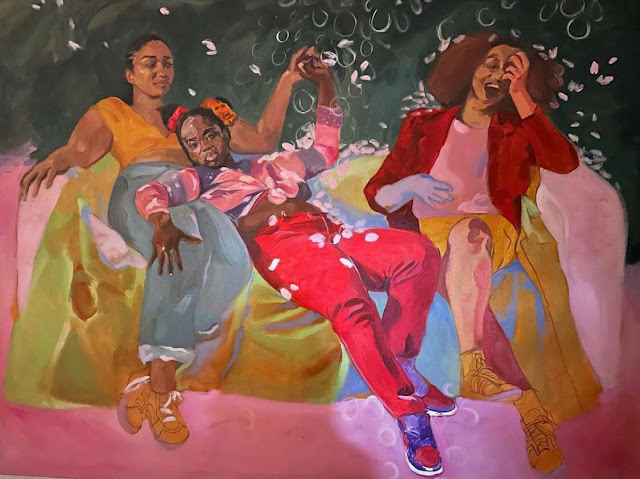 Okay, back to work. I’m editing a fantastic proposal about a seminal American artist whose name was somehow not well known. Not unrelated, one of my daughter's high school friends is now living and painting in Spain, and she is a huge talent. That’s a piece she's currently working on, that my girl was rhapsodizing over on Instagram. The artist is Tuere Lawton. I want to do my part to ensure that the world knows her name, because I honestly believe she will be a seminal American artist too. 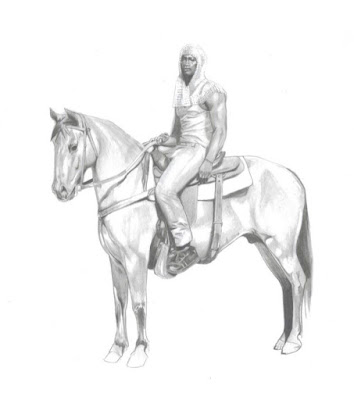 This morning, she posted on IG that since she needed to eat this month, she was having a studio sale, I jumped at the chance to buy one of her art pieces. I would have bought one of her paintings, but those went as soon as she posted them. So I bought this beautiful graphite study she did of a man on a horse. She's flying to New York City next week to see her mom, and will deliver the framed drawing to me then. I hope it’s the first of many of her works I will buy in years to come. Artists need sponsors, which makes me wish I were fabulously wealthy and could be a silent benefactor of many of them. I think of two of my cousins, the walls of whose homes are covered with vibrant original canvasses and breathtaking one-of-a-kind pieces. Like that. 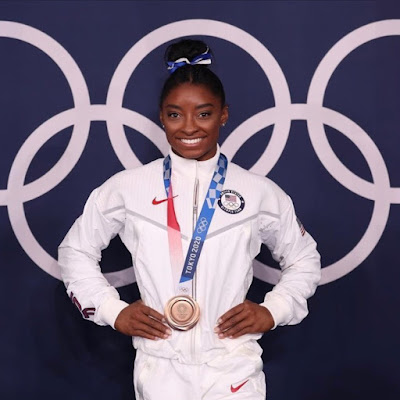 Last thing: Simone Biles won broze in the beam event final this morning. I was up at 4:50 AM, watching it live. She looked steady, and most of all joyful. She did a beautiful routine, though it's degree of difficultly was downgraded when she switched out her usual crazy-hard double twisting double tuck dismount—known as "the Biles," one of four skills named after her, that only she has ever done in competition—in favor of a simpler double pike dismount, which requires flips instead of twists. The two Chinese gymnasts therefore ended up with higher degree of difficulty routines, and they performed beautifully, too, taking gold and silver. But every member of the American women's artistic gymnastics team is going home with a medal, or two, or three. This Olympic team is one for the history books. I can't wait for the feel-good movie about how it went down.