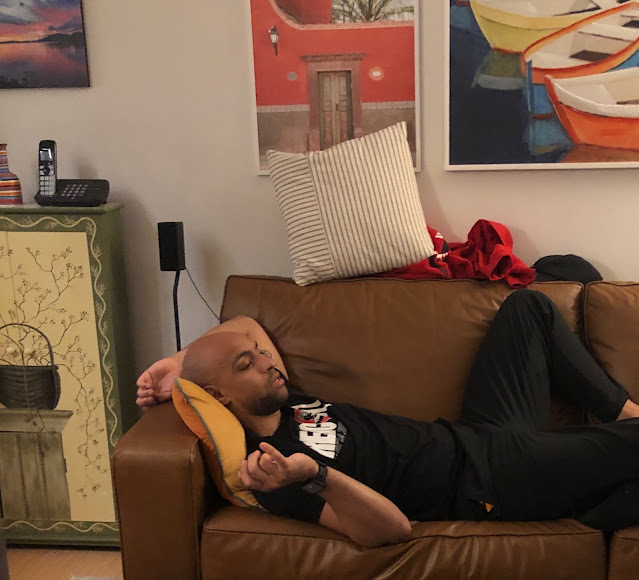 My son and his love came over on Tuesday evening for my birthday, and since it was the night before our boy's knee surgery, and his dad was to take him to the hospital in the morning, he and S. stayed over. Yesterday, the ACL repair went well. When his dad picked him up from the Hospital for Special Surgery at six in the evening, he wasn't feeling much pain, as the nerve blocker they'd given him hadn't worn off yet. New York being the structurally inconvenient city it is, S. met him curbside and helped him upstairs while his dad went to park the car. He was feeling nauseous, and barely made it to the bathroom before puking violently. He felt a little better after that, and I fixed him a sandwich, as he now needed to eat so he could take the meds his dad had picked up for him earlier.

He had a much better first night this time that he did the last time he had this surgery, he thinks because he deployed the pain meds more strategically, staggering the two different kinds of pills instead of taking both together as suggested. I guess when you're a certified paramedic you know how to adjust these sorts of things. Now he's on the couch with a big brace on his leg, icing everything with a very sophisticated contraption that his insurance wouldn't cover last time. This time, as a member of New York's bravest, he has the best insurance in the world, and he's geeked by the whole technology of the therapy machine with a sleeve that fits over his leg, running icy water over the surgical area and timing everything as programmed.

Last night, he reflected on how different his experience has been this time, how his medical care has been top of line at every step, and how frustrated it makes him that everyone isn't afforded this same level of care. He said his surgeon was excellent and that she told him the last ACL fix was poorly anchored and it was always going to be just a matter of when, not if, it would tear again. Thank God it didn’t pop while he was climbing into a fire, and that he has the good fix now. Recovery protocol is different this time, too. They told him to put weight on the leg immediately whereas last time they told him to stay off it for a week. He also starts home physical therapy exercises today, and clinic PT tomorrow.

He's using crutches of course, but moving around quite well, and feels confident that ultimately, he'll be better off than he was before, and that re-tearing his ACL was a blessing in disguise. But it’s a nine month rehab process. He says he's going to use his time on medical leave to study for the fire department's Lieutenant's exam. As my husband always says of our boy, "He's the sort that when he climbs a mountain and gets to the top, he looks around to see where the next mountain is that he can climb."

Widening the lens to record developments in the larger world that affect us all, there was the leaked Alito decision from the Supreme Court, indicating that the majority of justices will vote to overturn Roe v. Wade and a woman's right to be the sovereign of her own body. In some states, like Louisiana, there is already a move to characterize abortion as homicide, while the Supreme Court and Fox News are up in arms trying to identify and punish the leaker of the upcoming Roe decision. Yet these same people only shrugged at the revelation that the wife of a sitting Supreme Court Justice was instrumental in planning to overthrow our government before and during the January 6 insurrection. It's like we're heading back into the darkest ages of this American experiment with democracy, or maybe we're already there. 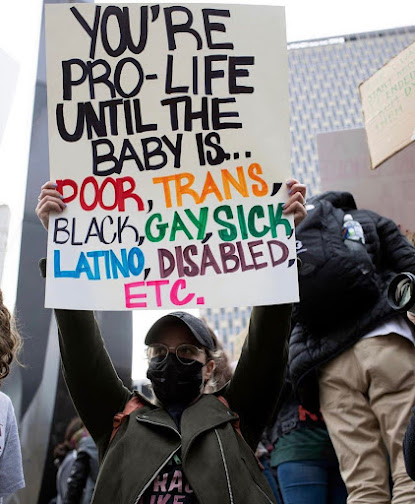 On the kitchen front, it is just about done. The contractor really pushed to have it in usable condition before my son arrived home from surgery yesterday. There are still fine-tuning fixes, like perfectly aligning a couple of the cabinet doors, and a few tiny touch ups to the molding. I am also contemplating adding a strip of molding in front of the undermount cabinet lights, as they are fully visible along the lower edge of the cabinets. My husband and the contractor actually like how that looks, but I have this notion that I want the lights to glow down softly from behind a thin facing of wood. My husband imagined task lighting while I was thinking mood lighting, and I suppose that's the difference. However, when the contractor brings the molding and holds it against the cabinets to see how it will look before installing it, if I find I don't like it better than the visible lights, then I am resolved to eat the cost of the already purchased molding. It will have been worth it to me to feel sure of my choice.

The man and I also had a difference of opinion about getting a new fridge. It's wasn't too contentious, but he did exclaim at one point, "Dear God, is money burning a hole in your pocket?!" You see, I wanted a wider, counter-depth fridge that would fit the alcove originally built for it, which meant donating the perfectly functional Kitchen Aid unit he'd bought when our old fridge conked out on Christmas eve six years ago. The fridge he bought was much deeper than the depth of the alcove, and the door, when opened, extended far enough that it hit and was stopped by the front of the dishwasher. He rolled his eyes and capitulated, and now we have a new, double-door unit that fits the space perfectly and soothes my visual OCD.

Last night, before his pain blocker wore off, our son stood on his crutches inspecting the new fridge, which had been delivered while he was in surgery that morning.  "This a really sweet fridge," he finally pronounced. "I'm sorry to tell you this, Pops, but Mom was right." My husband only grunted because he knows that I know full well that he really likes the new fridge, too. 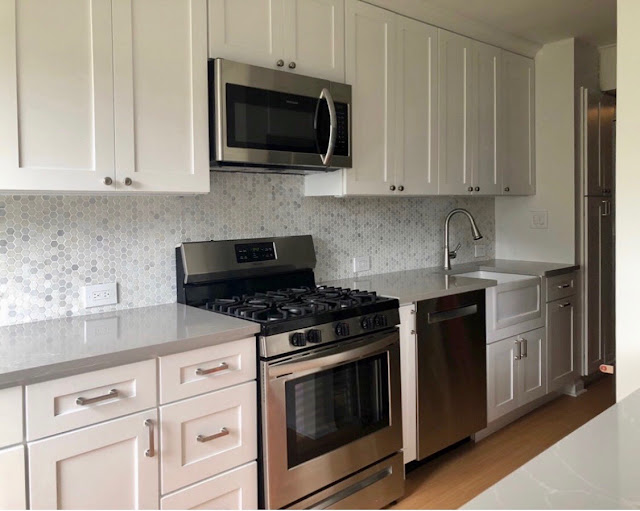 Here's a picture of the kitchen taken a couple of days ago, before we started moving things back in, and another one showing the counter and backsplash detail. I do love how it all turned out, though I will now need to add my own touches of color. The new cabinets are less deep than the ones we had before, and overall, I think we have less total storage space, but I don't mind. Everything feels a bit more spacious, and we need to get rid of stuff anyway. 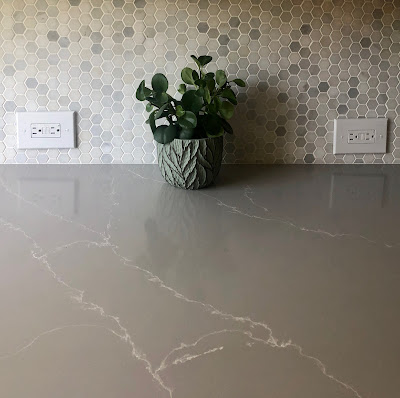 My cousin in Orlando, when she saw this picture, said "I see pebbles on a beach!" Now that she mentions it, maybe that's what I was subconsciously reaching for. Those island memories live deep.