Thankful for the good

I made coffee in my own kitchen for the first time in a month this morning, and it tastes sweet indeed. And my son, on crutches, made scrambled eggs and bacon for himself and his love both yesterday and the day before. This morning, he made himself oatmeal. It's so funny seeing the habits in our children that endure from childhood. He hated eggs as a boy, and only learned to enjoy them on hangover mornings in college. And so when he was growing up, on school mornings I would make him and his sister oatmeal with strawberries and blueberries and a cut up banana, sprinkled with crushed almonds and dried cranberries and drizzled with a little honey. That was my version of making a healthful breakfast for my children so I could think I was being a good mother. And now he tells me that oatmeal is still his breakfast of champions.

His recovery from the ACL surgery is going so much better than last time. The pain is manageable, and he appears to be in much less distress. He attributes this to his surgeon being more exact and precise in performing the operation, and therefore inflaming the surrounding tissue less. Last time, three days in, his knee was massively swollen and looked, as he put it, like grape jelly from the bruising. This time it is about two thirds less swollen, and the bruising is minimal.

His dad took him to his first physical therapy appointment yesterday, and at home, he is faithfully doing the assigned exercises, and icing on schedule. The part of him that is fascinated by the body's ability to heal itself is rather enjoying marking his own progress. I cannot tell you how relieved I am by the way this is going so far. I pray it continues like this. Plus, he is great company, our boy. And next week, our daughter is coming to town for a few days to go into her new office for an in person day, and to attend the bachelorette weekend of one of her closest friends since they were four. My son's finacee will be in Mexico attending a wedding in Cabo in which she is a bridesmaid. It will be the  just the four of us in the house again, the way we started out. "I think the four of us balance out each other's energies," I said to my daughter. She guffawed and said, "Keep dreaming, Mom." 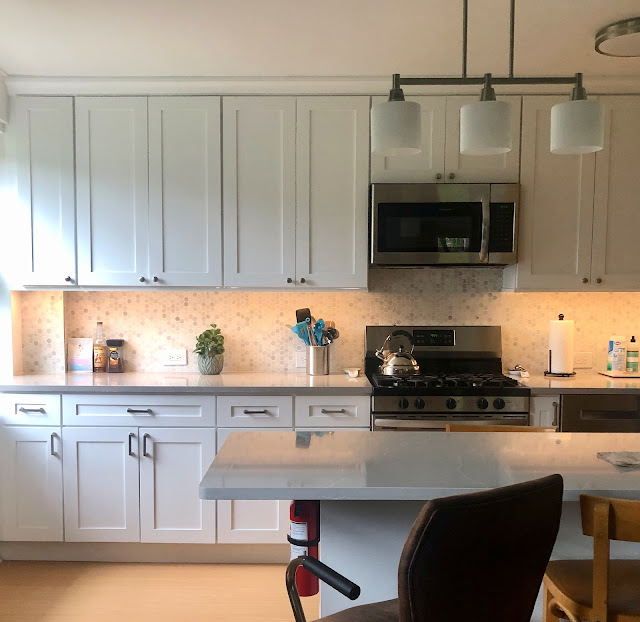 We're still slowly setting up the new kitchen, and trying to release a lot of excess stuff as we go, but here is a picture showing the under mount lights glowing softly from behind a strip of wood installed along the lower edge to shade the naked filaments from the eye. I think it works perfectly and am so happy that I pushed for it. The contractor came up with the most elegant solution possible, it simply looks as if the cabinets were made that way. He will be back next week to add some white wood filler to the seam where the new strip of wood meets the lower cabinet edge, to block out the thinnest bleed of light through it. I love that he is such a detail person, a soul after my own heart. Also, the backordered cabinet came in and was installed yesterday, as you can see on the upper left.

Only the tiniest details remain now: one door is going to be replaced because the contractor says it is warped and can't be properly aligned with its partner, and the floor molding next to the new fridge needs to be squared off and painted. And then we are done! Despite all my hang wringing in the early stages, I judge the entire project a great success. Thank you, dear friends here, for holding my hand through this. I promise to stop trying your patience and bending your ear about it now. My mother would say I possess too little faith, and it's true, I do tend toward catastrophic thinking. In this case, happy to say, it was wholly unwarranted. But I still appreciate having been able to process it here.