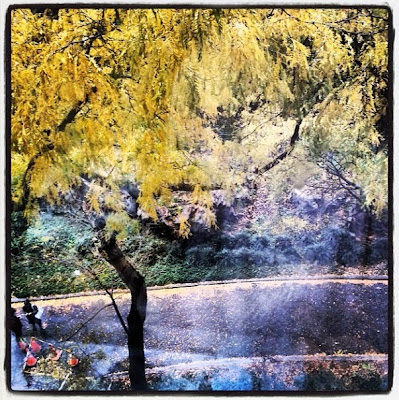 Well, the euphoria couldn't last. I mean, my cousin who is a life coach is amazingly good at helping me shift my perspective to a more optimistic bent, but let's face it, I can't carry her around in my pocket with me, and sooner or later, the harder realities were bound to assert themselves. This freelancing life. Sigh. It's time to diversify, time to admit that I will not actually be able to sit on the mountaintop doing only work that inspires me and makes my heart sing. I have to find work that will actually help cover our bills. I'm trying not to get into a spiral of worry, my stomach in knots. At the same time, I have looked at what I know will be coming in, and it's all already spent, even before it hits my bank account. I fantasized being able to put away a good portion of each check for the rainy days, but that isn't going to happen. Looks like I'm going to get a little bit soaked. Ugh. The old worry habit. The twisting with anxiety. The dark cloud. It's back.

What put me over the top today was a call from my 95-year-old aunt's home care agency, asking me to pull together a sheaf of paperwork to recertify her need for home health aides. I have to now track down all sorts of forms and documents and medical signatures that will prove that indeed, my aunt cannot take care of herself, that she does little more than lie in bed and stare or sleep, though her appetite is good, especially for ice cream and hot chocolate and ackee and salt fish and Jamaican beef patties. The paperwork, so much more than last year and the year before that, just feels like too fucking much. And the emphasis on copies of her bank statements just made me want to fucking scream. She does not have enough money to pay her bills each month. Every month there is a shortfall that I cover. I'm not really sure why this particular task is the one that turned my whole outlook to stormy, but it did. Most likely it is just the straw on top of a pile of worries and aches that I have been resolutely pushing down. And now they're all spilling over.

Meanwhile, at my former job there has been yet another seismic shakeup and the only remaining woman in the corporate C-Suite (who admittedly had a hand in a good number of job eliminations over the past 5 years) has been eased out (the euphemism was that with the reorganization, she has made the decision to leave the company), so now it's just the silver haired men in suits running the show and why is it so clear to me now that no women are allowed to retire from that company, only men. The women are ushered out somewhere in their mid fifties and there is always a reason good enough to get past the raft of compliance lawyers. Meanwhile the men get emeritus titles into their seventies and even their eighties and it is ever thus at that particular corporation.

In better news, this week I went back to physical therapy for my painful left hip and leg, and I have also lost 30 pounds in the last three years, 18 of them since August, but no one has really noticed. Except me. I notice in a lot of small ways. My cholesterol is down 25 points and is now in the good range, my glucose numbers have improved and are also in the good range, basically all my numbers are in the good range and onward.