The ACA and the de Blasio family of New York

There are a couple of things I meant to write about yesterday, but the day got away from me, so here I am, a day late, because this blog is a record of sorts, a place to post the things I want to remember, or share with my children, and so better late than never.

1. What Elizabeth wrote on her blog yesterday is the clearest explanation of the Affordable Care Act that I have read anywhere, and she accomplishes this with such economy of words! Please go and read it here.

2. Democrat Bill De Balsio won a whopping 73 percent of the vote to become New York City's new mayor on Tuesday, and I'm so excited to welcome this real world family from Brooklyn and say goodbye to the wealthy blueblood businessman and his entitlement and patronage. The de Blasio family is different from any that has ever occupied Gracie Mansion, in that his wife is a beautiful dark-skinned black woman who was a lesbian before they met and fell in love, his 19-year-old daughter sports flowered headbands and piercings and his son, 15, has an afro out to here. All three were very visible in the campaign of this 6 foot 5 giant of a man raised by his Italian single mother after his troubled alcoholic father, a war veteran possibly suffering from PTSD, committed suicide. De Blasio has said his father taught him what not to do. What he did instead was create a loving and close-knit family in which the children clearly feel free to express who they are. How will he govern? I have high hopes based on his unabashedly liberal politics and history, and the fact that he and his family are everything New York purports to be about, but too seldom is. There's more on them here. 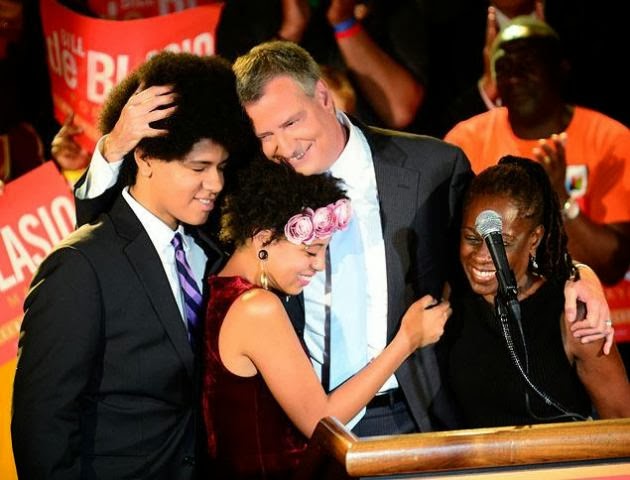