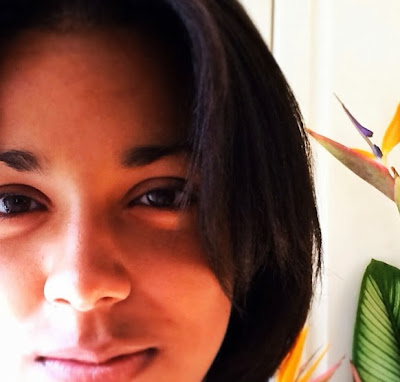 My girl is on the road, driving home from school with some friends with whom she will share a house next year. She signed the lease and is very excited about the house, which she says has a renovated kitchen and huge bedrooms and bathrooms and lots of light. The house looks pretty rundown on the outside, in need of a good coat of paint, but that's how most of the student houses look, so I guess I have to just trust that it will all be okay. In any case, my girl took the initiative to move off campus next year, and given the matchbox sized room we are paying a small fortune for this year, I'm not mad at that. She dislikes this picture of herself by the way, though I cannot imagine what there is to dislike in the warm pools of her eyes, the indulgent humor in her smile. She's heading out to do lunch with The Six when she gets in, then she and I are going to have a Survivor marathon tonight. We'll watch the entire season that she missed while otherwise engaged at school. It's our thing.

Meanwhile my niece is still in the hospital and will likely spend Christmas there. She is stabilized while there, but the mystery of it all is still not solved. And so we pray.

Here's a photo I took of my son last night. I played with it on Snapseed, a photo editing app I like increasingly. His dad and I were lying on the bed reading, and he came through the front door, kicked off his shoes and flopped between us as he often does, presenting his head to be rubbed. That boy loves to have his head massaged. When he was fussy as a baby it would calm him right down. Last night, it put him to sleep right there between us, all six-foot-two of him, all muscular man but still our baby, catching a nap before heading out again into the night to for a friend's surprise birthday party.

He came home relatively early, before 2 a.m. When we asked how come so early he reminded us he had to be at a track meet by eight this morning and needed to be able to function. I'm quietly impressed by his sense of responsibility. He likes to have his fun, that is for damn sure, but he definitely manages his commitments. The indoor track and field season has begun in earnest and after the last meet on Thursday, I texted him asking how it had gone. He said most of his guys PR'ed (earned a new personal record) and he was happy. It's odd for him sometimes, because he's coaching althletes who would have been his arch rivals in high school, and he still sees his old coaches at track meets. It's all very collegial and good humored. But he had to get used to rooting for his new team, Xavier, against his old, Fordham, which won most of the championships when he was in high school.

The rivalry is so deep his Xavier guys didn't think he'd be able to do it, so he got himself a Xavier hoodie and wears it to show them his solidarity. He joked as he shrugged it on the first time that it was burning him. But his athletes are doing well, and he's enjoying coaching more than he knew he would. It helps that he's fit enough to demonstrate what he's trying to teach them. He told us how he "smoked them" in a 60 meters hurdles race last week, all because he had better form. He says it was a breakthrough moment. They'd all reached the first hurdle at approximately the same time but my son snapped his leg down coming over it while the other guys sailed high, and that was what he was trying to teach them, how many seconds they lost going over the hurdle too high, and they got it, even though this was something my son didn't master himself until college. I think he might be a very good coach, but he still feels the call of emergency medicine. Soon enough he'll be certified and looking for an EMT job to supplement his coaching job. My boy is a grown up.