My sister in law called this morning to warn us that my mother is increasingly frail, that we should not be surprised when we see her, that my cousin visited her last night and commented as she left that she thought my mother was "declining."

I have felt and heard my mom's decline in her whispered voice on the other end of the line, but when I got on the phone with her this morning, she said, "I think this is my last New Year. I am glad you are coming," and suddenly I was in tears, unable to speak for fear I cause her to dissolve into tears, too.

After I got off the call, I told my son what his grandmother had said. He reminded me that she had once told him she didn't think she would make his eighteenth birthday, and now he was twenty-two. He reminded me that she had once said she didn't think she would see him graduate college, and now he is eight months out. And then he said, "But she's going to be ninety-two next month. One of these years it will be her last New Year." He said it gently.

I don't know what I will do without her when she goes. I feel stabs of guilt that have not been a good enough daughter. I have not been present enough. But my children have been a very good and loving with their grandmother. Here is my son helping his grandmother do her walking exercise when he visited her earlier this year. I have posted this photograph before. It is one of my very favorites. 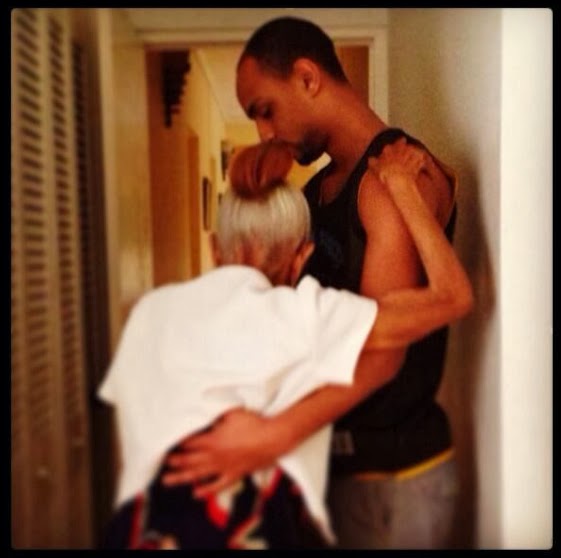