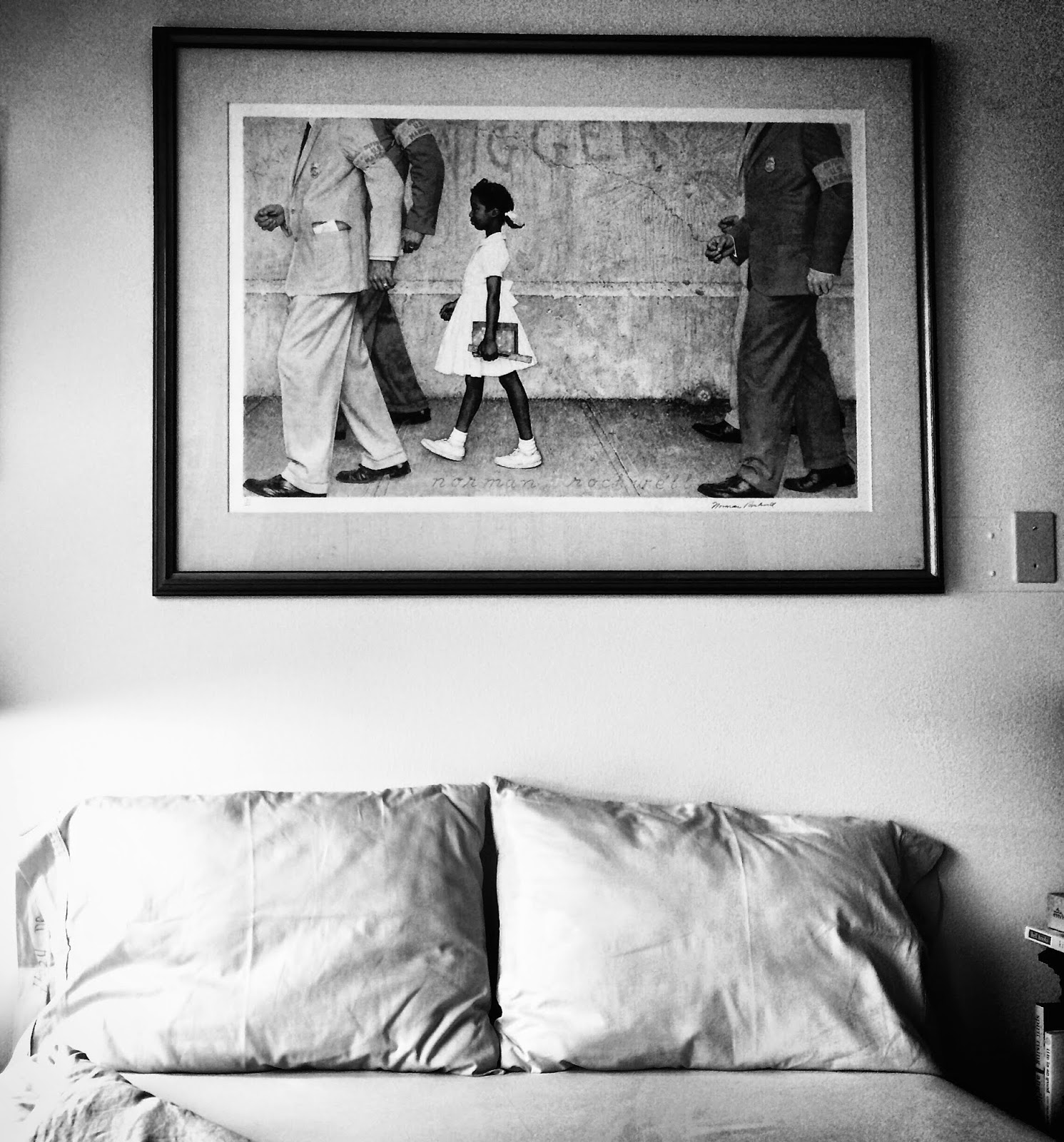 My brain and heart are completely possessed by my new project, a book I am writing for a woman who has had an extraordinary life. She is will be 97 in three weeks, and the more I peel back the layers, the richer her story becomes, and it was pretty darn rich to begin with. Behind all the stellar public credentials is a life that has held perhaps more than the usual allotment of sorrow, tragedy and disappointment, yet to be in the company of this woman you would never know it; she is a force, a warrior, not just a survivor but a soldier who engaged the battle and is still standing at the end of the war. I use the military metaphor intentionally. It suits her. But it is an incomplete metaphor, because it doesn't capture her eyes alight with humor or the ease with which she holds her history. She's says the Norman Rockwell painting, "The Problem We All Live With," is the entire story of her life. She says she is the girl in the picture, a signed print of which hangs over her bed.

This elegant 96-year-old exudes the crackling puckish energy of a much younger soul. From a distance with her low cut afro and thin frame, she looks like a teenage boy, but for the rolling walker she pushes ahead of her at great speed. A botched knee replacement some years ago doesn't slow her down. She works out for an hour each day, half an hour on the stationary bike and half an hour of yoga. Keep up!

I feel excited and adrenalized as I begin to commit her story to the page, but I'm on tenterhooks too. I worry I won't get it right. That I'll miss an absolutely crucial connection or anecdote or insight either because I failed to uncover it in my research or because I failed to ask the right question. Also, she is a medical doctor, passionately so, which means I need to get inside the language and mindset of her vocation. The hard part is that she has forgotten a lot in the telling. From day to day she doesn't quite remember what she's told me. She will sometimes look at me astounded when I repeat some part of her story, and ask me how I know that. "You told me," I assure her. "You are something," she says, shaking her head as if she suspects I might be clairvoyant. But her journals, speeches and notes over the course of her life show just how incisive her mind is, how engaged her heart. She says she used to be angry, but she carries her history lightly now, aware of the grace that coexists with injustice. She knows that even the hardest passages did not destroy her. Indeed they had the opposite effect, making her more determined to press on.

That is what I  need to do, too—take each step that is before me, press on, do the next right thing, reach for the next right word, and trust us both to find our way through. I can't quite describe the feeling that beats inside me this morning, a bird of hope and promise trying furiously to get free as I immerse myself in her story. I feel privileged, summoned, humbled, anxious, awed. I feel overcome.