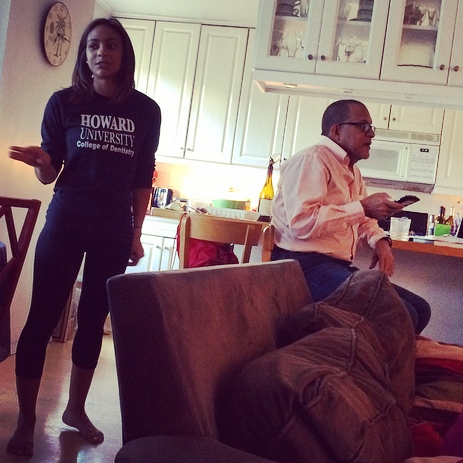 My niece was in town this weekend, as was her dad, my brother visiting from Jamaica. We had a rousing fine time Friday night sampling various wines from my husband's collection, and yesterday, watching on TV the Belmont Stakes (American Pharaoh!) and the UEFA finals played between Juventus (Italy) and Barcelona (for the uninitiated that's a high-stakes European football league that my brother, husband and son follow quite passionately).  My husband made delicious jambalaya, a spinach salad with cherry tomatoes and yellow peppers and pomegranate seeds making a beautiful mix of colors, and a home made vinaigrette dressing. There were seconds served, and then thirds.

As the handsomely groomed horses stood at the starting gate, I innocently asked why this race was such a big deal. My husband and my brother gasped in unison, stunned that I had managed to camp so resolutely under my rock. My niece confessed that she had been keeping me company under the same rock, so the men explained that if American Pharaoh won, it would be the first time in 37 years that a horse had won the Triple Crown, sweeping the Kentucky Derby, the Preakness, and the Belmont Stakes. The last horse to win was Affirm in 1978. Another winner, Secretariat, had a movie made about him; his 93-year-old owner was in the Belmont Park stands yesterday. So yeah, I was up to speed by the time the race was run, and able to appreciate history being made as American Pharaoh led start to finish, or wire to wire as they say. 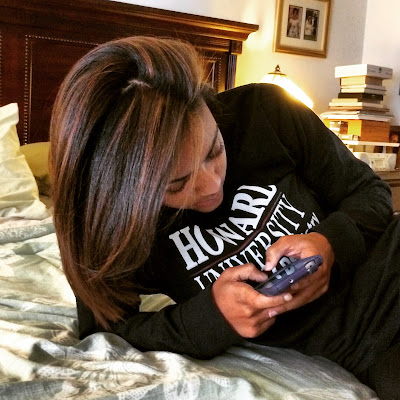 My niece, that morning, had gone to the hair salon to see the ever amazing Jocelyn, who recently broke the wrenching news that she is closing her shop. My niece, my daughter and I are in a state of shock, not sure what we will do now. As soon as my niece heard the news, she got on a bus from Washington D.C., where she is in school, to New York so that Jocelyn could cut her hair one last time before she closed the shop. She also wanted to ombre color it, which she trusted no one but Jocelyn to do. The results were quite lovely. 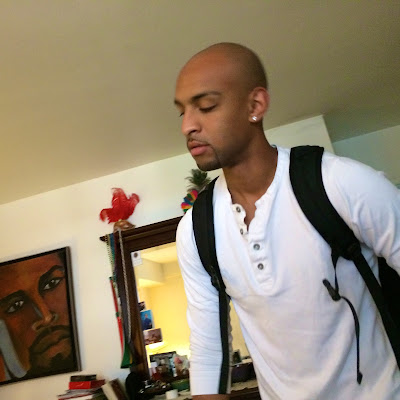 My son was on the other end of the hair spectrum. Having inherited his father's hairline, he shaved his entire head yesterday. He wouldn't stand still for a picture, so I had to catch what I could as he came in to torment/ bid his cousin goodbye before leaving for work. I think he looks kind of cool with that bald head. Like his father, my son is pretty unfazed about his hairline, which is the only way to be I think. It doesn't seem to get in his way, um, socially.