The joy and anguish 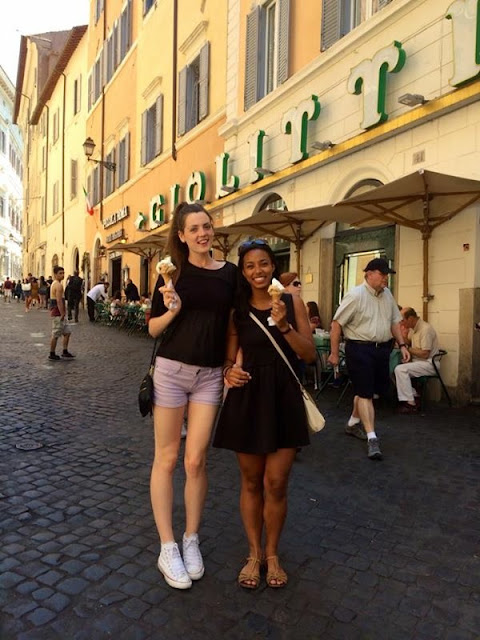 My daughter is having so much fun in Rome now, and she is working hard too. She had no idea how much writing would be required. She had imagined gallivanting around the city and turning in a poem or a story every so often, but no, they have to complete several distinct pieces every single day. But everyone's in it together so it's not so bad. I asked her if she thought the intensive approach was improving her writing. She said, not her writing so much as her ability to write on demand.

Her childhood friend who spent a week with her in Rome, who is back in New York now, told me that the apartment my girl shares with seven others is huge and light filled and beautiful. I also hear that my daughter and some of the girls in the program are going to Capri this weekend.

It's fascinating to me how as a mother, I can derive such keenly felt joy from what my children are going through, almost as if I am experiencing it myself. I can also be anguished by what happens to them. Like what has happened with my son: He injured his knee playing soccer at camp yesterday. He is ON CRUTCHES and may need an MRI. He has self-diagnosed a torn meniscus. It looks as if he will now have to defer his FDNY appointment for medical reasons. All these months he's been at the very peak of physical shape and the week before his physical agility and endurance test he injures himself. So long he has waited for this chance and now he will have to wait and reengage with  uncertainty some more.

My daughter texted: "Maybe the universe doesn't want him to join the fire department just yet and decided to send him a big fat message." I couldn't help smiling because her sentiment reminded me of the Bill Nye video Mrs. Moon posted the other day. And yet, thinking of it this way is the only thing helping me to put this is perspective. It is not the end of the world. It is a setback. That is all. The main thing now is for my boy to take care of that knee.
Posted by 37paddington at 12:17 PM