If only I could pray as hard for myself as I do for my children.

My son is entering week three of his refresher course with the firefighter EMT academy, apparently the best EMT training program in the country. He's also already applied for the next step, the year-long course to become a paramedic, and they will train him while still paying him a salary. Much better than the ten or twelve thou it would have cost to get this certification otherwise. He's exhausted most of the time; he has to do written and clinical tests every day, as well as an hour and half of physical conditioning, starting at six in the morning, two sessions a day. It's a quasi military boot camp; they have to be properly uniformed, boots shined, shirts tucked, faces clean shaven. He wakes at four each morning to fix himself a protein breakfast, make and pack his lunch, and study whatever material he will be tested on that day. He's doing very well in the tests so far; he knows that medical stuff; he's a natural at it. He does worry about the part of the course where he will have to drive the ambulance rig, swerving through a series of cones at 40 miles per hour, forward and then in reverse, using no brakes. I expect they will train him beforehand.

My daughter is still enjoying working part time as a chef instructor at the eating disorder treatment center, while looking for a full time job. I pray it's the one that called her back for round three next week. I'm praying that it has her name on it, because it's one she'd love to do. In the meantime, her life is pretty good. She and several college friends crashed at her boyfriend's brand new apartment in the city last night. He had a housewarming, a mini post graduation reunion, but the party didn't start till after midnight, as apparently everyone had other events beforehand. I can imagine the scene from my own twenty something years—definitely memories worth making.

As for me, for the next seventeen days, I'll be parked right in front of the TV watching the Olympics, especially track and field and gymnastics. Do you know this American athlete? Simone Biles, who's being called the best gymnast in the history of her sport. She has quite a story and a laugh that sounds like a trill of music. She takes a lot of joy in what she does. If you haven't heard of her, you will very soon. 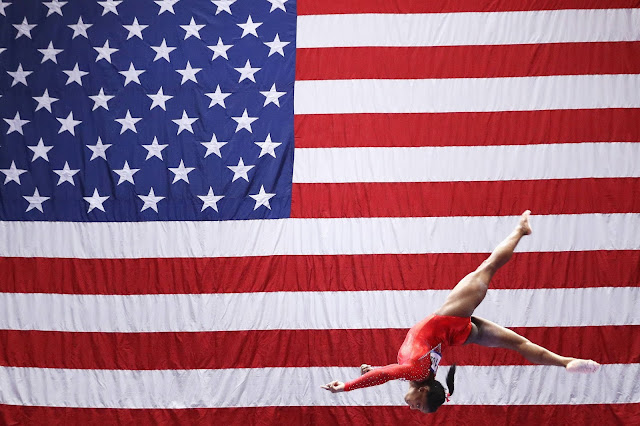