Aunt Grace turned 90 on Sunday, and there was a big party for her at her daughter's home in Kingston. Even though I couldn't be there, I was grateful to have been with her just two weeks before at our family reunion. Aunt Grace posted pictures on Facebook, because she is a Facebook whiz these days. She'll call you on messenger early on Sunday mornings and then tell you to turn on video so she can see your face. When you say, "I just woke up, I'm not decent," she'll say, "You think I care?" She is my mother's sister, the one closest to her in temperament, their voices so similar even their children couldn't tell them apart. At 90, she's as vibrant as ever, the only one of the three remaining sisters still able to travel, which is good because her three children live in Kingston, Nassau and Vancouver and she is based in Toronto. And three of her granddaughters are pregnant so she has three new great grandchildren on the way to join the six she already has. The pregnant granddaughters didn't make the celebration. They're all are staying close to home so as not to risk exposure to Zika. For them, as for the rest of us, these pictures are the next best thing to being there. 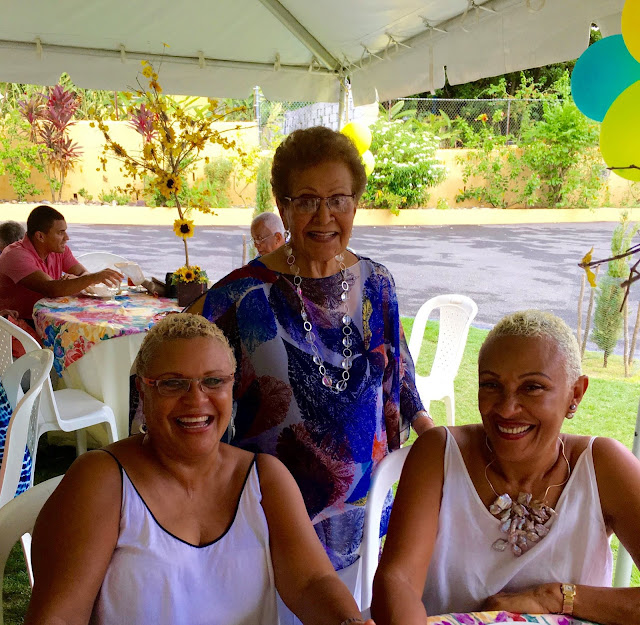 Aunt Grace with her daughters, my cousins Maureen and Sharon, both glamorous, charismatic women whom I idolized in childhood when I was the chubby, awkward, younger cousin. In our family, we call these two The Generals, because they don't know how to not run the show—and they always do it brilliantly. 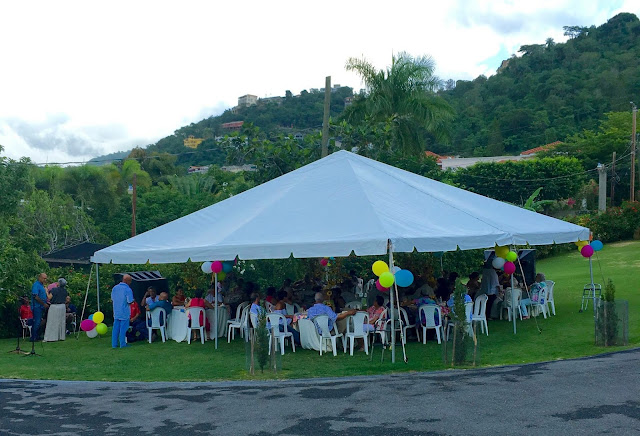 The party was under a tent set up on Maureen's front lawn. 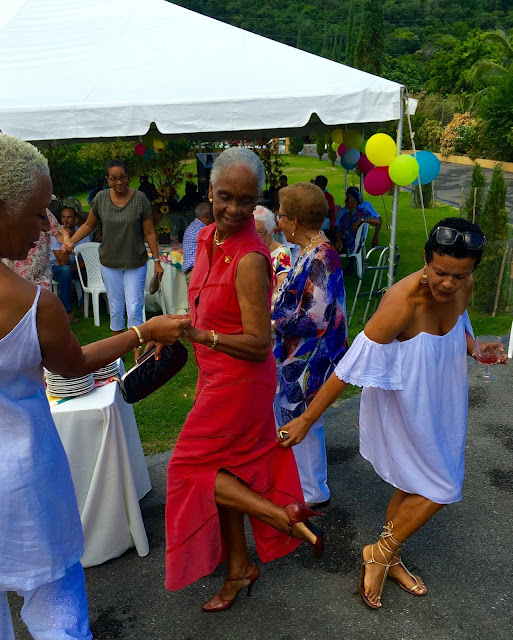 Aunt Grace's granddaughter, Arianne, oohed at Aunt Mavis's stylish heels. Aunt Mavis, who is also 90 years old, is a close family friend and was the doctor who delivered me into this world. At my mom's 93rd birthday in January of last year, she told me the story of how my mom saved her marriage. She and her husband had argued, and she left him and came to my mother's house, vowing never to go back. She said my mother said to her, "Mavis, you are not welcome here. You need to go home and talk to your husband." She has always been grateful for that night, she told me. 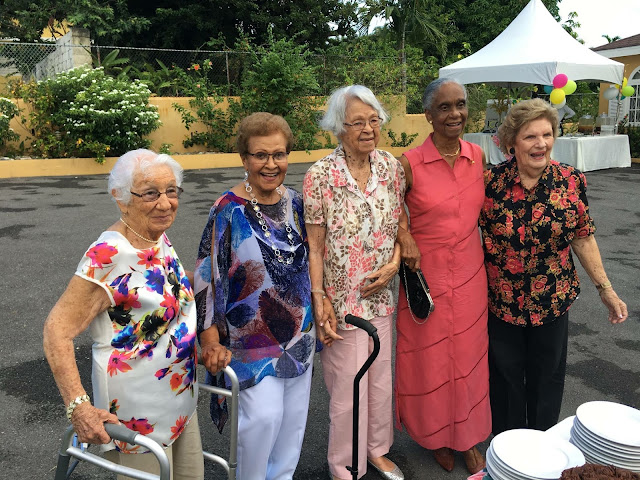 All these friends of Aunt Grace have passed the 90-year mark. They still play bridge together. 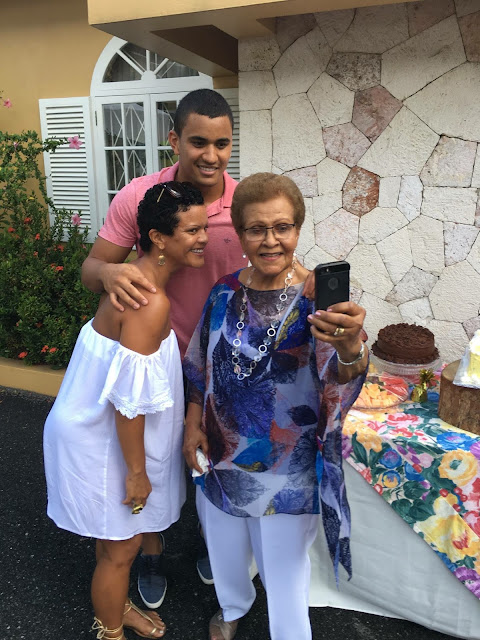 Aunt Grace's grandchildren, Arrianne and Matthew, were teaching their beloved Gaga the basics of taking selfies. 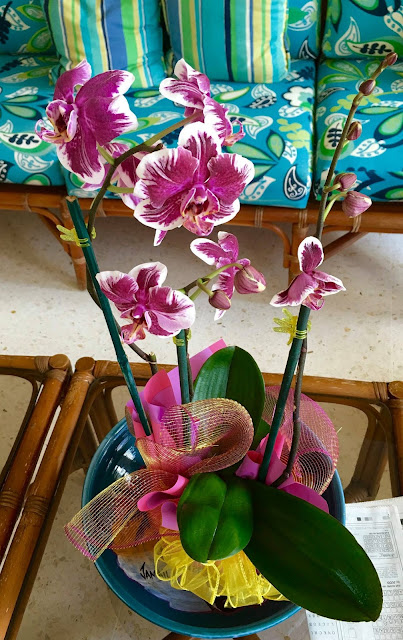 The table centerpieces were beautiful orchids. 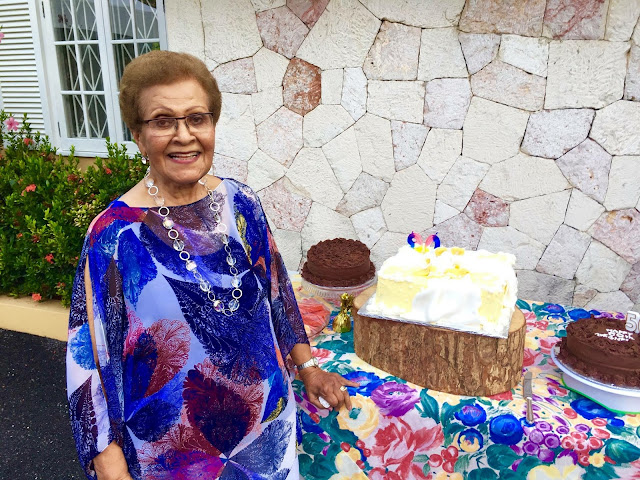 Aunt Grace at 90 years young. I love her so. 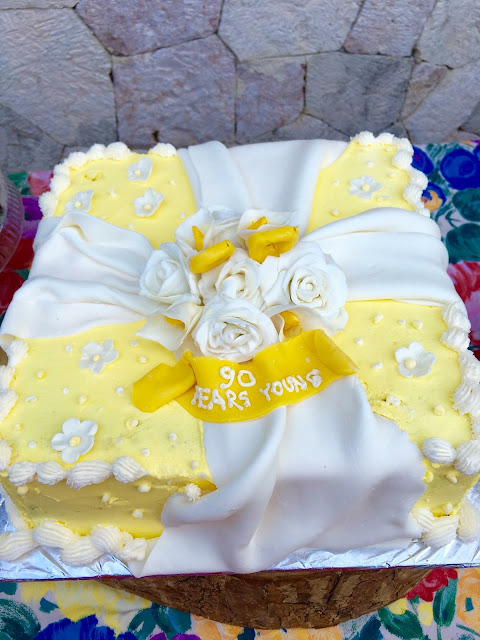