Rebecca in the East Village 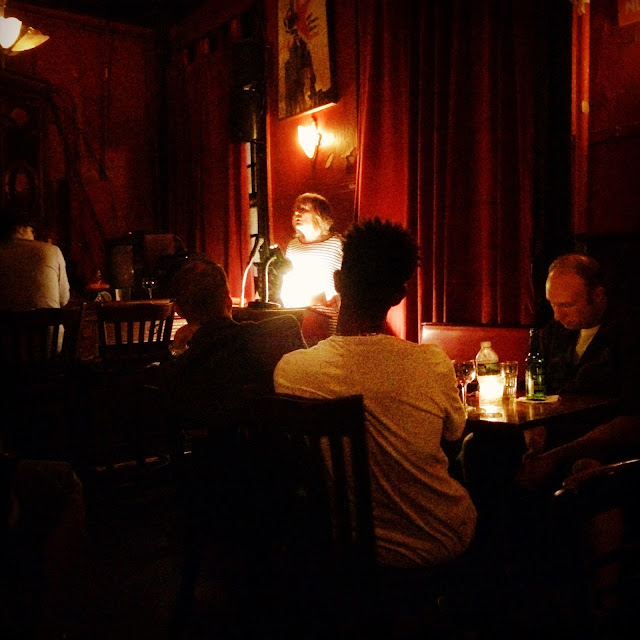 I met the extraordinary Rebecca Loudon last night. It was as if I already knew her, which I suppose in a virtual way I did, but looking into her eyes, her warm, loving, laughing eyes, it felt as we'd known each other for aeons, and the entire feeling of it was there you are, at last. Did you guess Rebecca has laughing eyes? With mischief in them, her intelligence and wit out to play. She so whip smart, that woman, funny and generous and beautiful, her heart on her sleeve, her arms enfolding you. She is just a sublime human, not to mention a fantastic poet with a devoted following in New York's arty hipster underground. So many poets have been hugely inspired by her, and a lot of them were in the room last night as she read from her Henry Darger poems at KGB Bar, a "literary watering hole" in the East Village. Rebecca was brilliant, absolutely mesmerizing. At different points in her reading she sang, barked, rumbled, inhabiting the poems, bringing us with her inside them. I was in awe, my mouth hung open, and yet I felt none of the agita I often feel when meeting new people. I was immediately at ease in her arms, because that's how we greeted each other, arms thrown around each other, laughing. It was the strangest thing: I wanted to just sink into her, rest my head on the curve of her shoulder and stay there. She said, "My family is here now." She meant me, but more so her son Page, who had traveled with her. He's a gentle artistic soul, his camera slung around his neck, his whole demeanor quietly accepting of the world. I loved him, too. He took our picture. And even though Rebecca and I could only talk in snatches, because she was the star of the evening, and everyone wanted her, still, it was a moment, like finding family, as she said. I confess I thought from Rebecca's blog that she'd have more sharp edges, and I'm sure on some days she does, don't we all, but last night, there was only cushiony joy in her company, there was art and humanity and love.