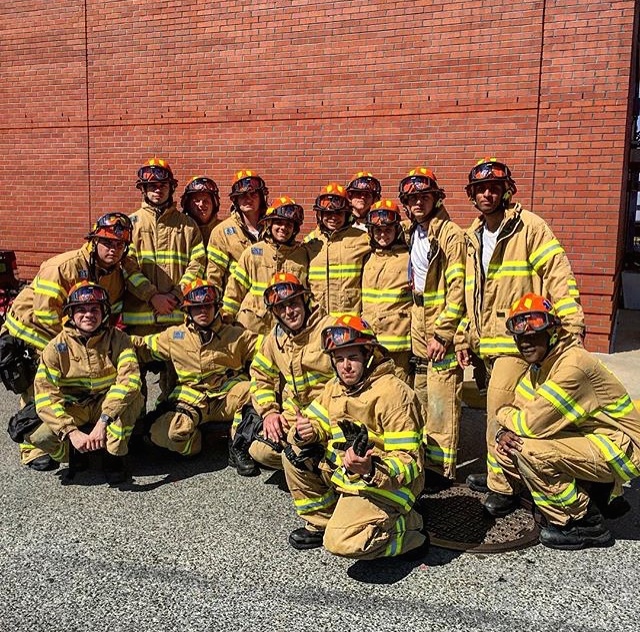 My son won't let me take any pics of him in his EMS gear until he completes the fire department recertification course in October. But the department did post this Instagram pic of some of the new recruits during Hazmat training yesterday. That's my boy, standing on the far right. He called this "a good day at the office."

In other news my cousin had her post op follow up yesterday morning. Her diagnosis was slightly more complicated than her doctor hoped, as the pathology report identified some "highly unusual cell structure." She and her sister are being asked to undergo genetic testing so as to help the doctors zero in on the absolute best treatment. These cousins are the children of my dad's sister, and we were discussing yesterday that four of the five siblings in our parents' family died of cancer. My aunt had also been told that her cancer cells had an unusual structure and behaved unpredictably, so the doctor's assessment yesterday was like hearing an echo down through the years. Except now, the medicine is more advanced, and my cousin is in good hands.

Still, she's going to be doing the treatment rounds for a while, which is complicated by the fact that she and her family have just moved from the Washington DC area to Orlando. She was diagnosed a week before their scheduled move, which might be a good thing, because she really likes the doctors she landed with at Johns Hopkins. But that means that while her family is now in Orlando, her daughter starting school yesterday, her husband in a new job, she has had to travel back to the DC area for surgery and follow up, and will stay for weeks, perhaps months, in the homes of relatives.

It's good she has the kind of extended family that rallies at such times, and besides, my cousin is always a delight to have around. She is very quick to laugh, and this whole unscheduled proceeding hasn't dampened that at all. Life can sometimes be a cluster fuck of unscheduled proceedings, however. Proving this, my other cousin, the one in whose home she's staying, had to rush to meet her husband at the emergency room last night because his heart "wasn't feeling right" and they thought his Pacemaker might be malfunctioning. The Pacemaker's working fine, but his heart was doing its own wild ride, regardless. They admitted him overnight so they could stabilize him.

When my cousin's best friend from childhood heard that my cousin's husband was back in the hospital for his heart, the friend admonished, "You know, you really need to stop pole dancing in your thong in front of that man." If you knew this woman, an always beautifully coiffed born again Christian with a straightfaced delivery, you'd know how hard we laughed.