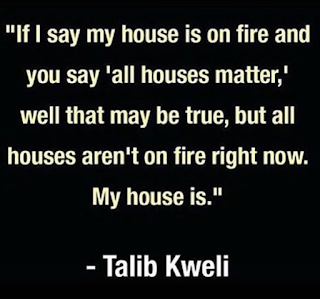 I can't do it. I can't take in yet another black man shot and killed by police. Terence Crutcher. His car broke down in Tulsa, Oklahoma. He was driving home from music appreciation class when his car stalled. He was unarmed. No weapons on him or in his car. He did not call for the police help. He knew better. But police on their way to another call stopped when they saw him. He didn't wave them down. He was just standing quietly by his car, waiting for roadside assistance. Suddenly, by virtue of nothing more than his being black, he became a criminal in the eyes of the ones who had weapons. He had his hands in the air yet they tasered and shot him. Then they stood around watching him die. The police dash cam and a helicopter cam caught it all, and recorded one of the officers saying, "That looks like a bad dude too." No. No no no no no. You knew nothing about him. All you saw were the stereotypes in your head. Terence Crutcher was someone's husband. Someone's father. He loved and was beloved. I guarantee you that police in Tulsa are scrambling right now to find something, anything to paint him as the "bad dude" they thought they saw, when in fact all they saw was his skin color. They're going to say they were in fear for their lives even though Terence Crutcher did not lunge at them or in any way menace them on the video footage. He did not reach inside his car. All the windows were rolled up. Whatever cops say in coming days, he wasn't threatening anybody. He was just a man trying to get home to his family. He was a big guy like my husband. Fierce faced perhaps, like my husband's face in repose. Would they look at my good responsible sweet funny wonderful husband by the side of the road because his car broke down and think he was a bad dude too? Cops managed yesterday to bring in alive a man accused of setting off bombs in New York and New Jersey, a man who was actively shooting at them as they tried to arrest him. They brought him down with a shot in the leg, then called 911 and took him to the hospital where he was operated on. That was good police work. What happened in Tulsa to Terence Crutcher was murder.