Saturday night brought news of an explosion on New York City's West 23rd Street and an undetonated pressure cooker bomb later found some four blocks north. That area, Chelsea, is one of the busiest in the city on any Saturday night. I watched on TV as police and firefighters and EMTs worked the scene. I worried about other bombs that might not yet have been discovered, and was silently grateful my son hasn't finished his training and been assigned to a station house yet. 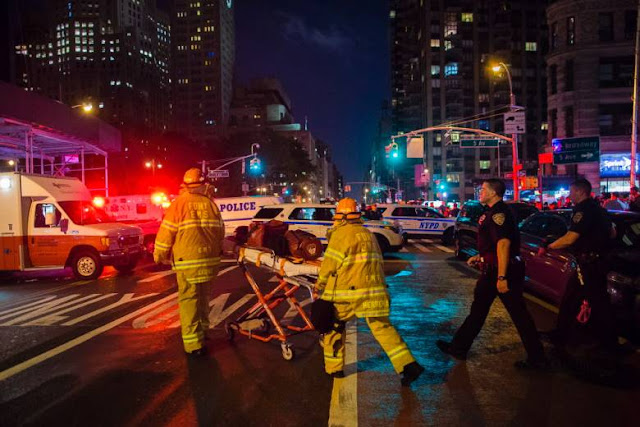 Thankfully no one died in Chelsea, and all of the 29 injured have now been released from area hospitals. But this morning brought more disturbing news—several unexploded pipe bombs discovered in a New Jersey train station, right next to Newark airport. Get it together, people. We are not doing this!

I fear these events will only embolden Trump. The young people in my life actually think Trump might win, not because they want him to, but they are talking to other young people, former Bernie supporters who are having a hard time voting for either main party candidate, and who may vote for a third party candidate or not at all. Endless conversations are being had to try and convince the reasonable to vote for the only candidate in the race who makes any kind of sense. But of course, there are those who will vote for Trump no matter what. How did we get here again? I still can't quite fathom it, even though I thought I was watching the whole time.

I spent most of the weekend indoors with my family. My children's loves and various friends were here, too. My living room was crowded with tall men, including my husband, watching football and noshing on beer and chicken wings. In another room, my daughter and I watched Gray's Anatomy on Netflix, and later, my son's girlfriend and I watched the Emmys. I was intrigued by Mr. Robot's best actor win. I've never seen the show, but the premise sounds interesting. Is anybody watching? Is it worth tuning in?

It's a rainy, dark Monday here in the city. I have choir rehearsal tonight. If I didn't, I might not go out today either. My house feels hidden away and safe.
Posted by 37paddington at 12:37 PM