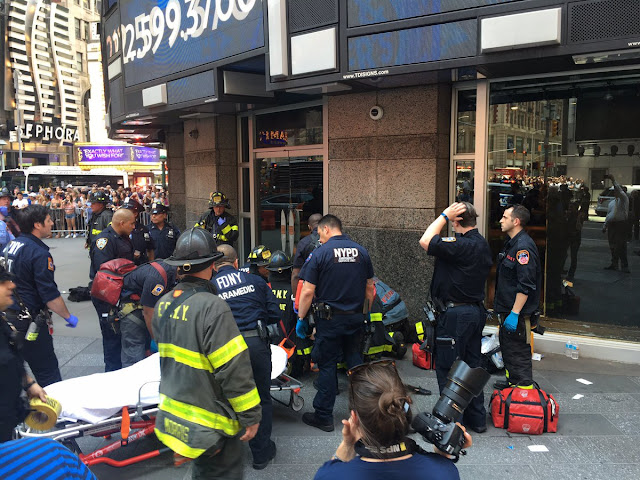 Yesterday, as hundreds of pedestrians milled and lounged at tables in hot, busy Times Square, a car plowed into the crowd, injuring 22 people and killing one, a young woman, 18, who was visiting the city from Michigan. The driver was drunk, high on PCP, and is in custody. That poor teenager's 13-year-old sister was among the injured. These two girls were just walking along one day and hell rained down.

As soon as I heard what was happening, I knew my son would be on the scene, one of the FDNY first responders attending to the wounded, even before it was clear whether this was an ongoing terrorist attack or a lone ranger lunatic. Bomb squads swept the area as my son and his fellow EMTs and paramedics performed triage and ferried victims to nearby hospitals. I texted my son: "Call me when you can." A couple of hours later he did call. "I'm safe," he told me, "and most of the injured are stable now." "That's what I wanted to know," I said, to which he replied, "I figured."

I am still getting used to the fact that whenever anything like this happens in the city, my son will be rushing toward it, lights flashing and sirens blaring, and I will be just another citizen mother watching the news channels, praying.

In the midst of the chaos, I had to travel to midtown myself to meet with my editor on the book I'm co-writing. My son said, "You better reschedule your meeting. There's no way you can get in here. All the roads are blocked off." I decided to try anyway, because until I could sit down with the editor and go over the proposed chapter outline, I was stuck, unable to begin. I did manage to make it past all the yellow police tape to the publisher's office, which was a hushed, air-conditioned world completely removed from the pandemonium and gridlock on the street outside.

It was a good meeting. I really like my editor. She says she's tough, but I welcome tough. I finally have clarity on how to move forward. One slight wrinkle is that a project I thought had fallen through has come back around, so I'm juggling again. This is a good problem to have, though I confess I was looking forward to diving into writing the book, my focus undivided. On the other hand, it's always better when I'm super busy. My brain chatter goes a little haywire when I have time on my hands. Who am I kidding? A lot haywire. Of course, these are small problems compared to those facing a family from Michigan today.