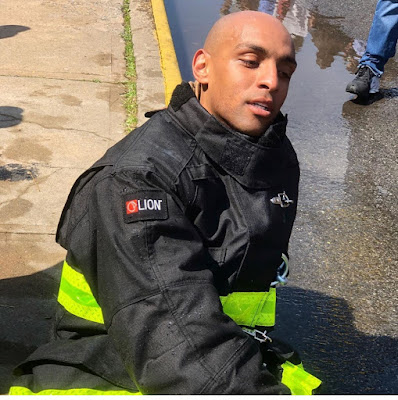 We haven't seen our son, nor spoken to him much. He's emotionally hunkered down, the way he gets when things are hard, the way he was during the brutal boot camp that was the fire academy. He was less like that during paramedic school, although that was hard, too. But the learning excited him, felt intuitive and native to him.

Meanwhile, our daughter's four-person team at the non-profit has now raised almost three million dollars to feed the city's hungry. She works the phones from home every day, capturing donations from corporate givers. Then at night, she paints botanical watercolors, working out her technique. She says it calms her.

I once read that the activity that feels most deeply peaceful to you is your true play, and that which excites you, makes your heart leap with joy at the challenge it brings, is your true work. It would seem my son is where he is supposed to be in terms of work. Unfortunately, he can't get much of his true play right now, which appears to be rock climbing. He is such a tersely physical being, such a contrast to his sister, who can roam quite happily inside her own head.

Our son is picking up every overtime shift he can and doing what he can in this pandemic ravaged city. People who go into the kind of work he has chosen don't waste much energy on being afraid for themselves personally. They feel a mission to help the ones who are endangered, even at the expense of themselves. But it takes a toll. "How are you doing, son?" I texted him yesterday. "Fine, the usual," he texted back. Hunkered down.

Last night on the news, someone said that health care workers and first responders will be suffering from PTSD when this pandemic finally eases its stranglehold. In our city right now, they are fighting to save the sick and the dying in a war zone, bombs falling all around them, nothing hyperbolic about that.