Yesterday was our daughter's birthday. She and her boyfriend came over and we celebrated here. After much discussion, we have decided that our two households will quarantine together, which means following the same social distancing, hand washing, and no face touching rules so that we all remain healthy and don't infect one another or anyone else. So far so good, everyone seems fine. My cold from last week is gone, and I wonder if it might have been allergies, as no one else seems to have come down with it. Also, my friend with a cold who I sat beside in choir three weeks ago has now tested negative for covid. I'm thankful for that.

My husband drove to get our girl and her guy and bring them to our house, and then he drove them home at close to midnight, so they wouldn't have to deal with subways, buses, or Uber cars. The birthday was challenging at first. My daughter's friend group since elementary school, the girls we still refer to as The Six, sent her a Milkbar cake for her birthday. They had asked for a no-contact delivery, but it never did show up at her apartment door or in her lobby, despite having been marked as delivered, so she had to spend some time on the phone working that out. Apparently some other lucky person found a Milkbar birthday cake at their apartment door yesterday—if they opened their door that is. That cake could sit there for days.

Then, when my daughter and her love tried to exit their gated community, the gate they usually use wouldn't work with their key fob, so they had to walk around to a different one. They are both able bodied and would have been able to climb over the gate if they'd had to. Still, for some of their other neighbors it would definitely have been a fire hazard. Later, we tried to order dinner in, reasoning that gig workers need to keep being paid, but after two separate tries on Seamless, our food never showed up, so my girl on her birthday spent yet more time on her phone, politely texting with the restaurant and with Seamless to secure refunds. She's good at this. Finally we decided on Philly Cheese Steaks from the 24-hour corner deli for dinner, and my girl and her guy went out to get them, waving to neighbors but keeping a good social distance from other people every step of the way. They did see a dog they periodically sit for, and Emma bounded over to them and into my daughter's arms. That was a highlight. As soon as they got back into the house, they washed hands and we wiped down items that had come from the outdoors—not perfect but we do what we can. 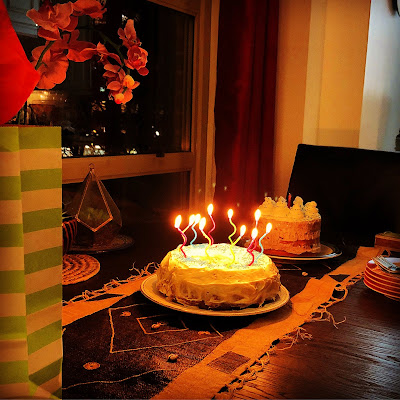 Despite the false starts, the afternoon into evening was easy and enjoyable with the five of us. My girl's boyfriend had made her a delicious Funfetti ice cream cake, with blueberry cheesecake ice cream layers, and an angel light whipped cream icing. It was so loving of him. The evening before, he'd seen my girl starting to spin out, trying to decide what kind of cake she wanted and he told her not to worry, he'd take care of it. It's so helpful when our partners know our quirks, and step in to calm them. I loved him for it. We (as in my niece) had also made a cake so it was a two-cake affair, and we sang the traditional happy birthday song as well as the African American version, the South African version my daughter's art teacher has been singing to her and her friends since they were four year old, and the Caribbean happy birthday song. I thought I'd taped the whole joyous rendition of it, but when I checked, I'd pressed the record button wrong. We watched lighthearted animated features chosen by my girl, Frozen II and Tangled, both featuring a more empowered generation of Disney princesses. Then we watched The Great British Baking Show before calling it a night. It all felt very peaceful. 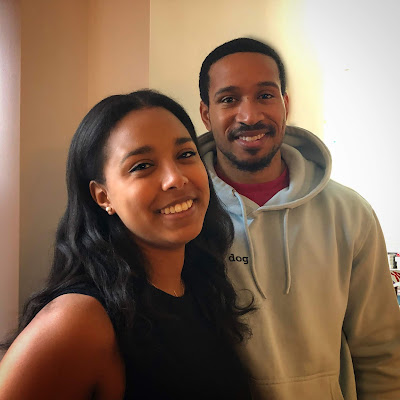 My son didn't join us of course. As a firefighter and paramedic, he is on the front lines of this epidemic every day, and would not expose us. So far, he and his fiancee seem fine, and he is rather luckier than his dad in that he lives with a partner who loves to cook. My husband is at this moment sitting in a chair behind me doing his daily Spanish lessons on Duolingo. He attended church services on Zoom at our dining table this morning, while I lay in bed and watched the latest episode of the new season of Outlander. Meanwhile our daughter is at home making a watercolor painting with the art supplies we gave her for her birthday. She's sending us photos of every stage. We haven't shopped in over a week. We're all stocked up and, yesterday notwithstanding, using what's in the house. Only six people are allowed in the supermarket at once, and everyone else waits outside, six feet apart, for their turn. This is how the lucky are living now in the big urban metropolis. We keep on.