We drove up to camp to see our kids for visiting day, and had the most wonderful time with them. I had been missing them and worrying about the recent upset, and truly my chest had felt like there was a fist permanently around my heart, and I went through each day remembering to breathe and function and do my normal routine, but that little kernel of worry about whether things would ever be the same was there, located inside that fist. Well, yesterday, the fist opened, our family was together the way we always are, silly, affectionate, full of stories and laughing, and me looking at them all, drinking in the sight of them, misty with happiness. I won't try to explain, because that would require some rehashing, and there is no point, really. So I'll just put up some pictures, not many good ones, because I was more in the flow of the experience than trying to document it, and the exposure is kind of red, but then my kids really did look kind of red-brown from the sun, and the red tee shirts didn't help. But it's them. My deepest felt joy. 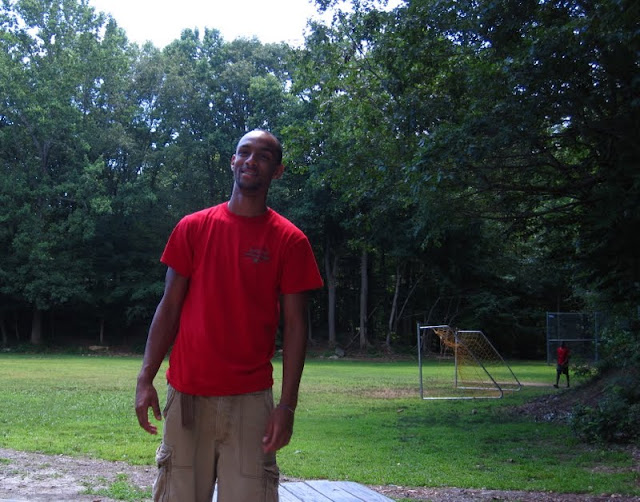 Our son came out to greet us first as our daughter was lifeguarding on the waterfront. He looked healthy and happy to see us. That's my son's best friend in the background, who's like our other son. His older brother Omar, below in the pink shirt, had asked if he could travel up with us to see him. He's a sweet personable guy, and chatting with him made the drive up and back pass very quickly for all of us. By the time we got to the waterfront, our girl's shift was up. Here she is with her dad, cracking up about something. He had most likely just said something wry, as he does. 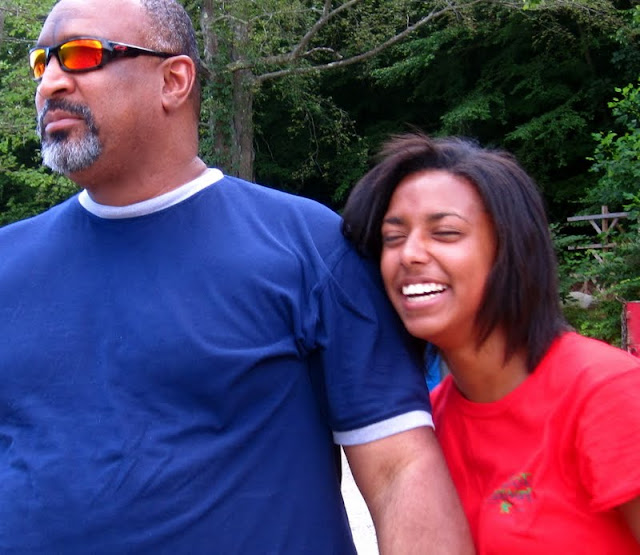 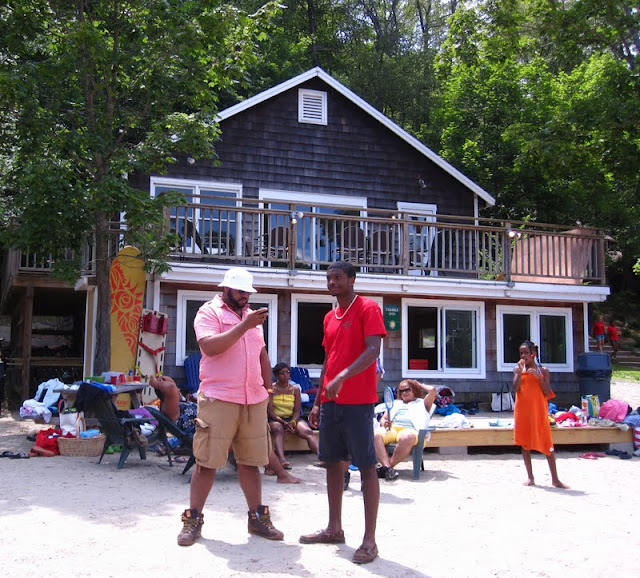 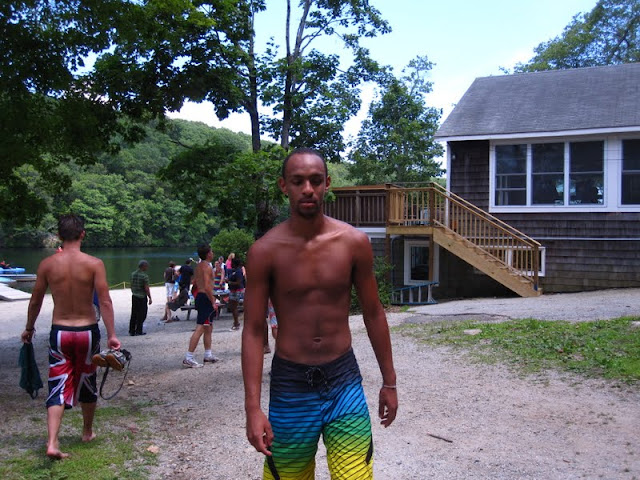 Our son has been a camper and now a counselor at this camp for the past decade, and he is kind of a rock star there. People come up to us and tell us how much they appreciate him. Usually they say things like, "I love that kid." We hear it every year, always grateful that they bother to say it. Now we're hearing it about his sister as well. She's fairly new to the camp, having spent only one year as a camper there (she used to go to farm camp instead). She told us she enjoyed being on staff and felt more a part of things as a counselor assistant than she did as a camper. That was probably because her fellow campers had been coming there together for many years, and she felt a bit outside. But having worked last year and this, she's finally racked up enough time to feel like the place is truly hers as well. It certainly seemed to be hers. On the way to her tent, we were ran into two of her bunkmates, a couple of young men who gave us firm handshakes and made good eye contact, and several of the kids in her unit who she cheerfully introduced. "These are my girls," she said as they crowded round her. And to the girls, "These are my mom and dad." 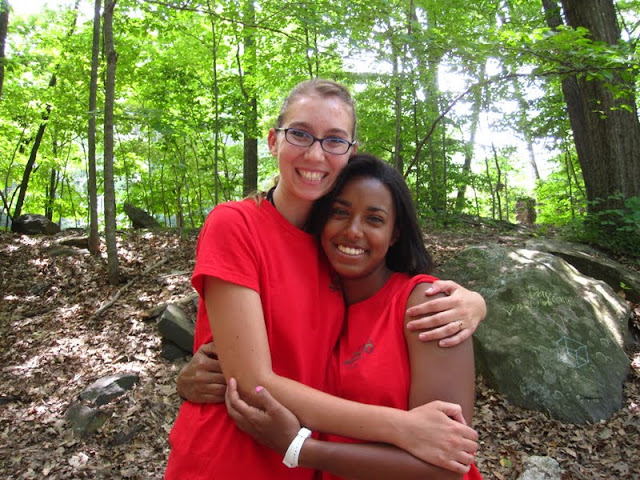 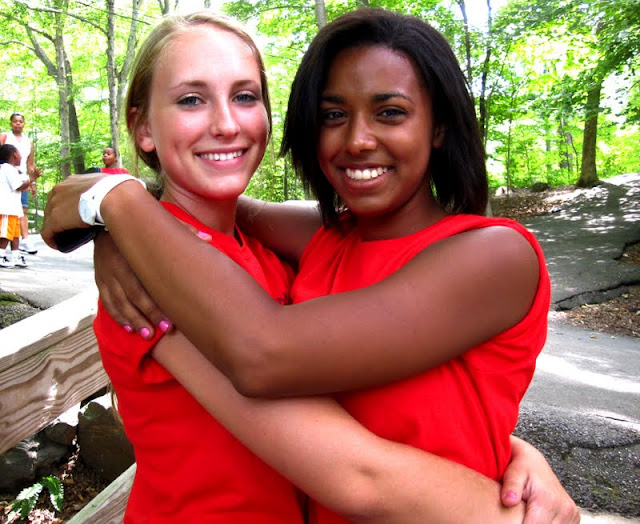 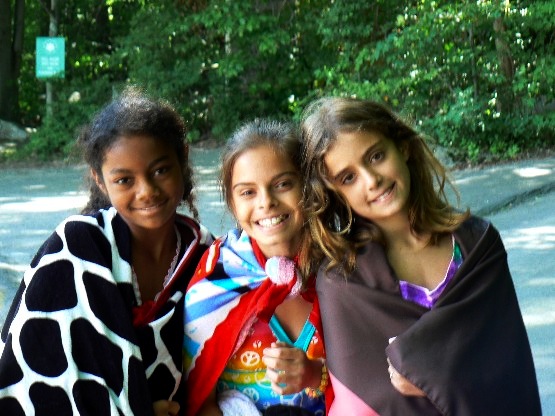 The girls below are from Spain, and so had no parents visiting. There are a number of kids who come from abroad every year, mostly from Spain, Italy and France. The counselors took the kids whose parents couldn't visit to a movie. Before these two girls left, they hugged my daughter with such affection. I could see how good she is with the kids, and how comforted she makes them feel. 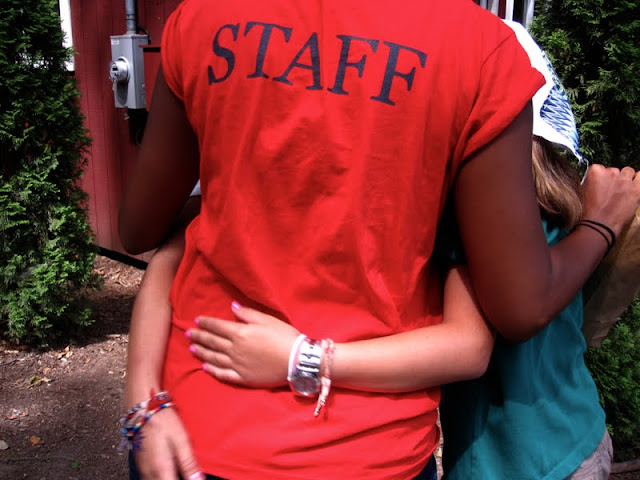 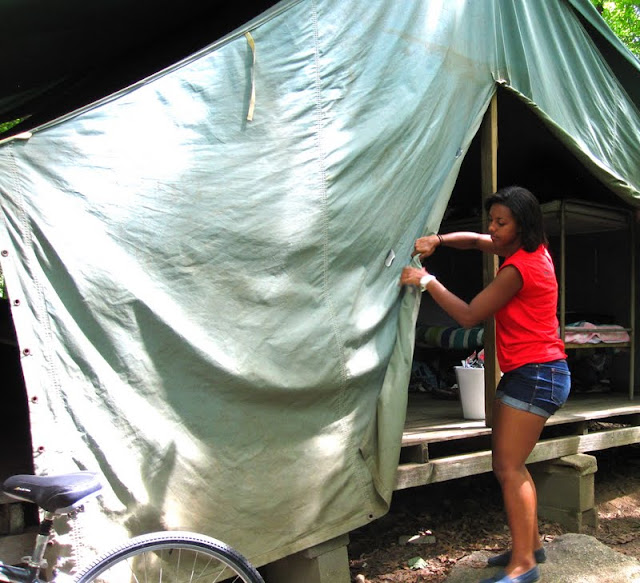 At the tents, our daughter expertly folded back the flaps to reveal four very neat bunks. "You cleaned up for us?" we asked, and she admitted it wasn't just for us. "We knew parents would be walking through the unit and we didn't want them to think the people caring for their kids were such a mess." After, we strolled the long way back to the lake, a steeply descending scenic path I had never been down before. She pointed out landmarks, and told us about her girls. She is assigned to the 10-11 year-olds and she is enjoying them, even the difficult ones and especially the scrappy ones. As she spoke, I realized she had everything a 17-year-old could want. Close friends, children who don't hesitate to wrap their arms around her, cute counselor boys who step up to meet the parents, no homework, activities round the clock, dances every Friday night, and the most idyllic natural setting anywhere. No wonder she wants to spend as much of her summer as she can in this place. 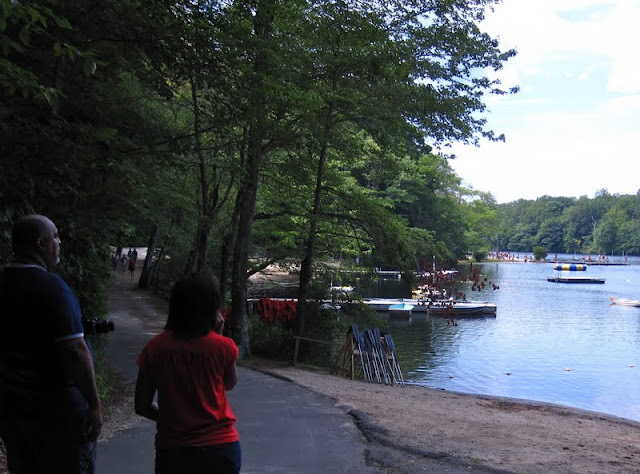 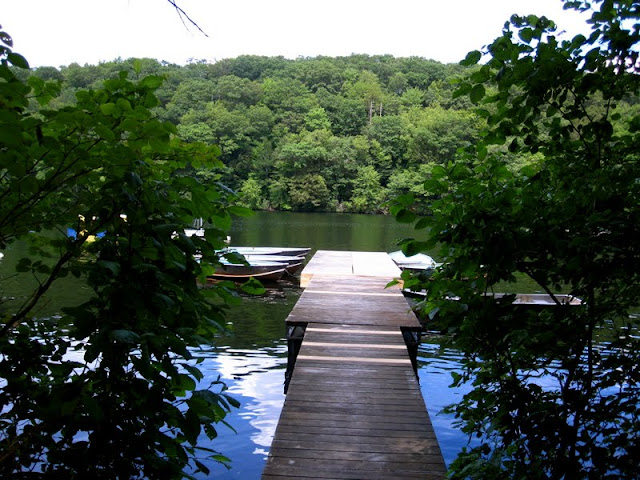 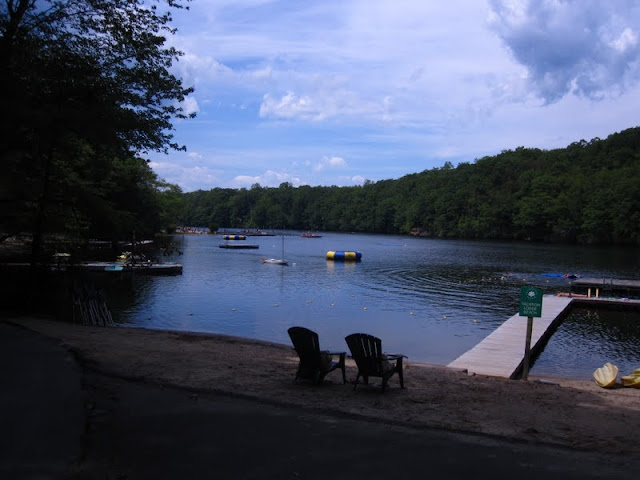 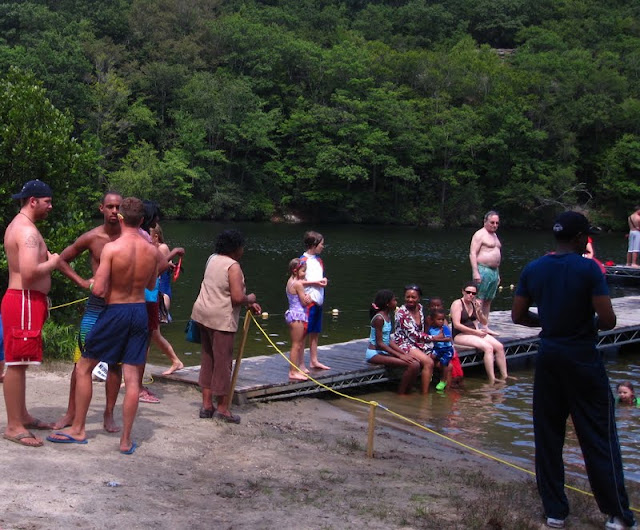 Back on the beach, my son had finished his lifeguarding stint, and we all sat around catching up. It was a perfect day, just warm enough with not a trace of humidity. Our son told us he found himself doing some of things his dad used to do, like putting his hand on top of a kid's head and (gently) steering him where he wanted him to go. "Did it ever bother you?" I asked him. "No," he said, "I liked when he did that, otherwise I wouldn't do it with my kids." 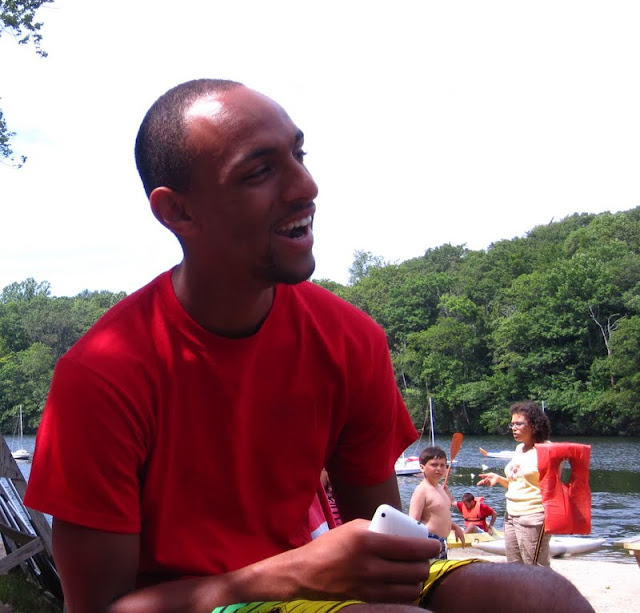 Of course our son's iPhone was ever in his hand, and he was periodically texting his girlfriend, who was off campus for the day since she works in day camp and the day camp counselors had the day off. Apparently, things are going well there. Then one of my daughter's friends challenged my son to a game of mancala, and several of the counselors sat around bantering cheerfully and watching them play, until one joked that mancala would never be a spectator sport 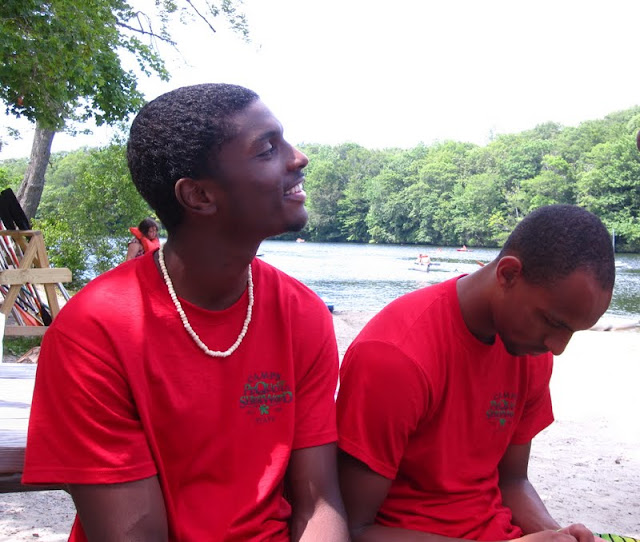 Later, the six of us trooped to car and drove into town for lunch and for a stop at Walmart so that the kids could resupply. I think the Walmart resupply stop is the real purpose of parent visiting day, as we ran into campers and their parents in every aisle. One mother of a boy in my son's unit came up to my son and told him that her 11-year-old, who had been coming to camp for four years by then, told her that my son was the best counselor he had ever had. My son had earlier described this kid as an "all star," talking about how helpful he was with another kid who was homesick. I wanted to tell the boy's mother what my son had said that about her child, but I thought back to when my own child was a camper, and I was seeking feedback from the counselors, and I realized that my intrusion would have been weird and would even have undermined my son. Besides, my son told the mother how great her son was. "Neatest one in the tent," he said at one point. The mother said, "Well, that is not an accident! I worked on that!" And my son laughed and said, "Well then I'm sending all the others to live with you for a while!" He was so easy and comfortable in the exchange. It was one of those moments when you get to stand aside and watch who your children are in the world. And seeing them that way, you sigh deeply with gratitude. 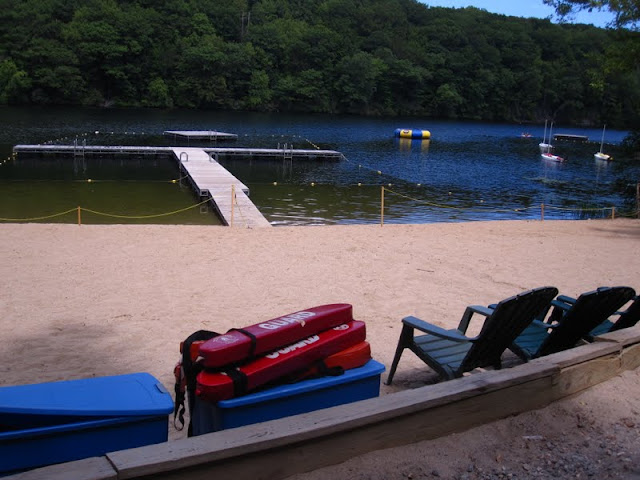 And then you exhale.