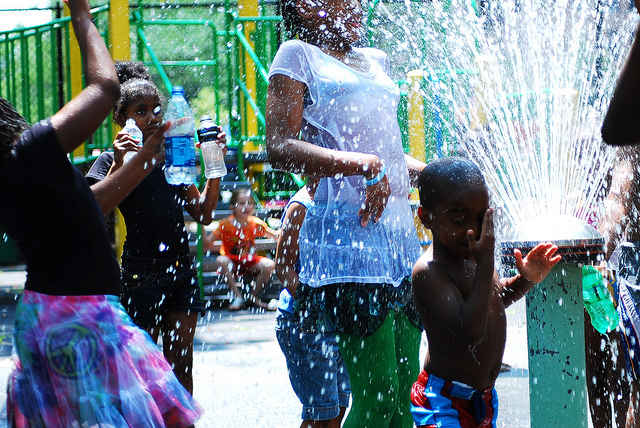 It was 104 degrees in the city yesterday. The sidewalks were mostly empty, but in playground fountains and by water hydrants, those who had not decamped to air conditioned rooms or country houses were out in force, beating the heat in quintessential New York fashion.

The night I arrived in New York City was as hot as this. I was here to attend college, and would live for the first year with my aunt and uncle in their eighteenth floor apartment. My parents and I had flown from Jamaica to Miami to visit relatives. The plan was for Uncle Charlie and Aunt Winnie to meet us there and drive us from Florida to New York over the course of two days. We stayed overnight in a Howard Johnson motel in North Carolina, and ate meals exclusively at McDonalds, not sure of what the racial sentiment might be in the towns we were passing through. This was the seventies, and things were changing, but not everywhere. I made the trip crushed between my mother and aunt, daydreaming about my new life as I memorized the back of my father's head, concentrating on the road from the front seat. My mother, aunt and uncle talked continuously, but my father didn't say much. I think now he must have been wrestling with a kind of prideful sorrow at leaving his only daughter behind in New York. I surmise this because I am so like him emotionally. Now that I am a parent myself, I know this is how I would have been feeling.

We got to the city well after dark, turning off the highway onto a ramp into Harlem. It was still muggy with heat at that late hour, and the fire hydrants were all open. The wet graffitied streets glistened orange under the street lamps, and children were running  and jumping through the spray and laughing as if it were high noon. That became an indelible vision of the city that would become my home. I had known since I was five years old, the first time our family visited my Aunt Winnie in New York, that I would one day move here to stay. But I was two years into college before I broke the news to my parents that I wouldn't be coming back home. My father cried.

Sweltering New York days have reminded me of that first night ever since. I still get a particular flutter of scared excited possibility whenever I see the hydrants open, because that was the feeling that rose up in my throat that first night, leaving me speechless with the understanding that my future had arrived. 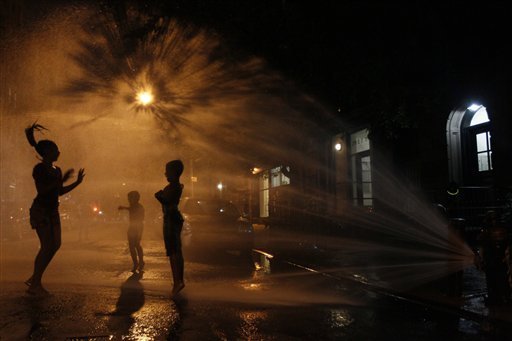