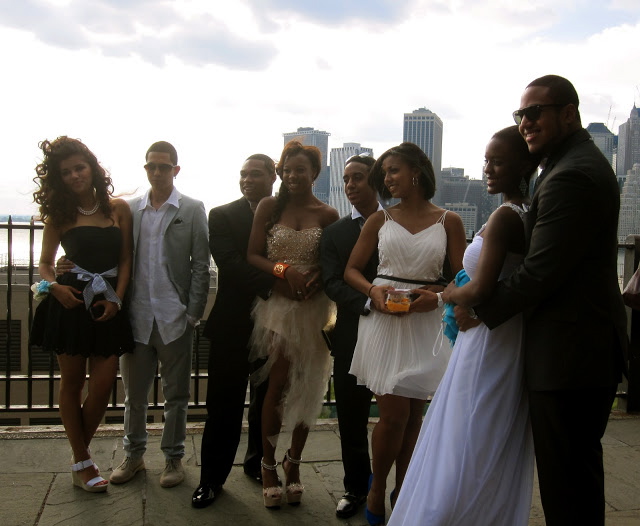 So prom went off, not exactly without a hitch. There was our collective gasp as we realized, while stuck in traffic, that our girl had forgotten the boutonnière for her date in our freezer. Again. You might recall she did this last year, too, but the day was saved by an extra lapel flower that someone had brought. This year, she had carefully selected a small orchid, and was rather pleased with it, so when we realized in unison that she didn't have it, and that to turn back for it would make her late, well, her super cousin and super brother swung into action. They jumped out the car, ran many many blocks back home to get the boutonnière, then took the subway to the Brooklyn Heights promenade, where the pre prom photos were being taken. They ran the several blocks from the train and arrived minutes before the prom goers were to board the party bus to take them to the hall where the ball was being held. ("Grand Prospect Hall. We make your dreams come true!" That's the ad for the place where the prom was held. It plays often on New York TV and the voice over lady rolls her rrr's in a particularly memorable accent.) Panting from exertion, my niece thrust the clear plastic container holding the boutonniere at her cousin, commanding, "Pin it on him now!" She couldn't, because they were in the midst of taking the photo above, but you can see the clear box with orange tissue in her hands. After, as our girl was pinning the lapel flower on her date, my niece supervised closely, saying, "I hope you know you are loved! And when I get married, you're doing everything!" My daughter was laughing but she was seriously grateful for her super siblings. 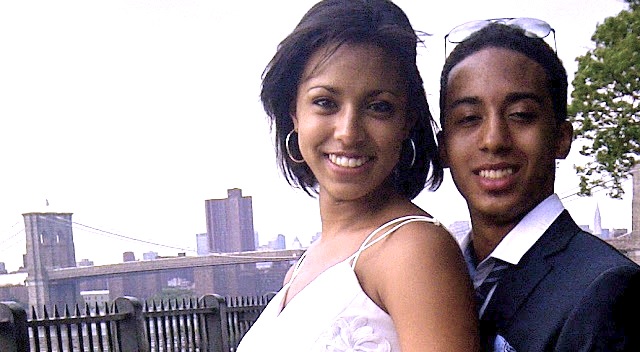 I didn't get any really good pictures of my daughter and her prom date, because everything was so rushed by the time everyone got there, and it was extremely windy, but there were a lot of cameras pointed at everything, so I think I will probably find some good photos when people have had a chance to upload them on Facebook. Here's a phone picture in the meantime. Notice the Brooklyn Bridge in the background. They kids seemed full of energy and excitement. I expect they had a ball.