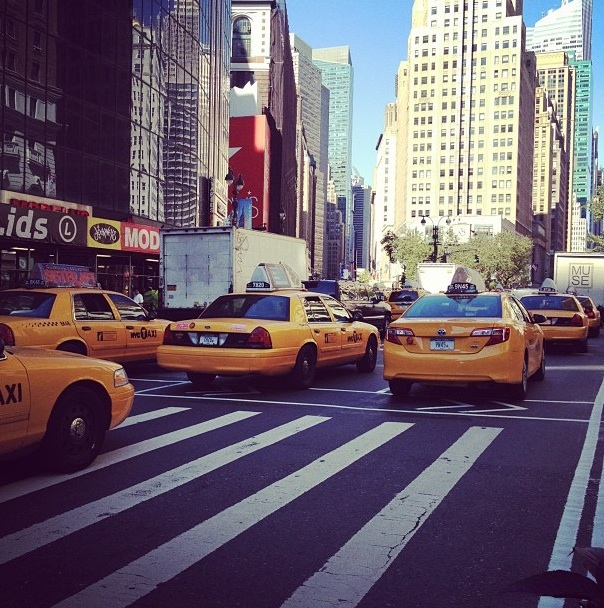 Life is really not so bad, and I suppose I lost my phone today, or rather left it behind in a cab, just so I might be reminded of that. I was on my way to a lunch time appointment and as soon as I got into the building and pressed the elevator button, I realized my mistake. I ran back outside, but the cab I'd exited was no where in sight. A couple years ago when my son's iPhone stopped working on his first day back at college, I didn't fully understand the degree of his distress. Two years later, I get it. I supposed I have become progressively more involved with my Blackberry in that time. As my husband said back when my son lost his phone, you store your whole life in that thing. So as soon as I got back to the office I went into reporter mode and started to work the phones. I was determined. I am a journalist after all. We are supposed to be able to find anyone and anything.

At the Taxi and Limousine Commission Lost and Found line I reached a lovely woman who went above and beyond in being helpful. Fortunately, I had paid for the cab ride with my debit card and so had the name of the cab company. Unfortunately, I'd neglected to take the receipt; I never take it, reasoning it's just more paper to put somewhere and the record will appear on my account anyway. Bad move. It meant I didn't have the cabbie's medallion number, which was the only way to reach him. So the Lost and Found woman gave me the number of the company that processes the credit card payments, cautioning me not to say where I had got the number. She instructed me to give specific pieces of information in order to get cab's medallion number. In three minutes I had the hack number and was calling the company he worked for in Queens. The dispatcher was willing to help but his computer, which would tell him which driver was driving that cab at that moment, was down. He promised to call the cabbie the minute the computer came back. I had no choice but to wait.

I called my daughter, who I knew would soon be trying to reach me, as we are supposed to go shopping for college stuff after work today—woo hoo! When she heard what I had done, she gasped in sympathy. Then she said authoritatively, "Okay, Mom, this is what you have to do. Just keep calling that phone on repeat continuously for hours. Because this happened to me once and you didn't know about it, because I just kept calling the phone until finally the cabbie answered and he brought the phone back to me." The things we learn in a pinch!

Soon enough, the dispatcher called back. He said a passenger had found my phone but refused to give it to the cabbie, saying he would return it to me himself. He gave the cabbie his business card, which had his name, phone number and address, which the dispatcher dictated to me. He said the man's card indicated he was a dentist whose office was in midtown. I thanked the dispatcher and called the number immediately.

He was waiting for my call. The good doctor said he had decided this would be his good deed for the day, as he knew how wrenching it is to lose your phone. He told me he had gone into my call log and called the last number I had dialed, which was Aunt Winnie's, but when he asked to speak to her the caregiver said (and here he mimicked a West Indian accent), "I don't think you going have any luck with that because she is 94 and has Alzheimer's." (She is 93 and suffers from dementia, not Alzheimer's. I believe there is a difference.) So then he called the next number and got my friend Michelle, who took his information but refused to give him mine (New Yorkers are highly suspicious). By the time she called me I was already on the phone with the very cheerful doctor, who sounded as if finding my phone and reuniting me with it was the highlight of his day.

So now my daughter is on her way to pick up the phone for me, as I have a meeting in a few minutes and can't leave the office just yet. But all is well that ends well and people generally want to do good and I think I'll send some thank you flowers. I just googled the good doctor and it turns out he is a celebrity dentist, has appeared on Dr. Oz, and photos show a very zen, uber designed white-upon-white Park Avenue office. An exuberant and colorful spray of wildflowers, my first instinct, won't quite fit the environment. Maybe a white orchid?