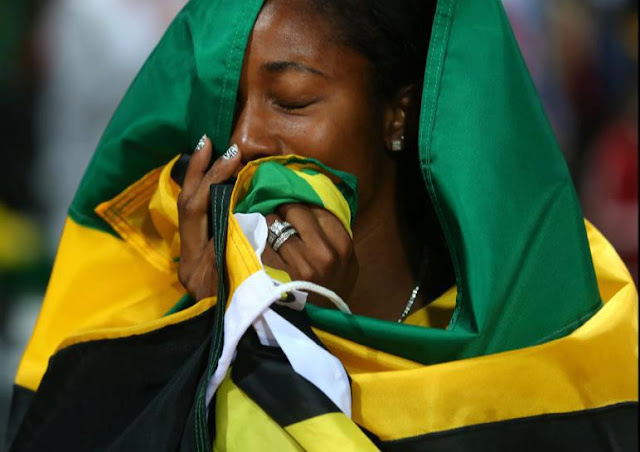 As my little island celebrates 50 years of independence this week, Jamaican track and field athletes are focusing the world's attention by capturing gold after gold in the London Olympics. With my family I watched Shelly-Ann Fraser-Pryce (draped in the Jamaican flag, above) win the 100 meter women's event in 10.7 seconds this weekend. We were in the airport departure lounge in St. Lucia, where a large contingent of Jamaicans were also waiting. There is no more thrilling audience to watch such a race than a bunch of track-savvy Jamaicans. Ignoring flight announcements, we were glued to the tiny overhead TV, cheering and jumping up and down and yelling at the screen as Shelly-Ann ran down the win. The next day, Usain Bolt and Yohan Blake took first and second place in the men's 100 meter, making Jamaica's mastery of the sprint event complete.

I can promise you right now there will be more gold to come for Jamaica this week. People wonder how a little island, a dot on the globe, can so dominate world track and field competition. All I can say is we grew up with the fever of track, stoked at the annual Boys and Girls Champs each year, with every single high school in the island sending athletes to compete, and the rest of us cheering ourselves hoarse in the stands of the National Stadium. One explanation put forth to explain our speed and stamina (well, their speed and stamina, not mine) is that during centuries of the triangle slave trade, Jamaica was the last port of call for ships, which meant that only those Africans too stubborn to succumb to disease, starvation and despair were left on board. It is that proud ornery strain that remains in my country people, allowing us to believe we can compete on any stage, undefeated, bring it on. No matter where we are in the world, no matter what new countries we have made home, no matter what nationality our children, every four years when the Olympics come around, we are all simply Jamaicans, rooting for our local heroes, knowing they will leave everything on the track and bring the glory home.