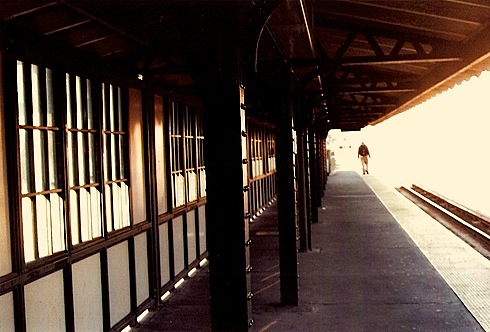 On the phone this morning, my mom asked about my kids. I told her they seemed to be fine and I mentioned how much I missed them. She said, "Ah, my love, we have all been through it, and I am going through it still." And then she said, "You know, your Aunt Winnie and I could not have been closer growing up. That's not to say she wouldn't slap my knuckles with a ruler when I tried to tidy up her dresser and put away her things. We shared a room and you know I am a tidy person. But we were so close. And when she left Jamaica to live in New York, that is when I first understood how much you can miss a person."

Her voice is soft and ever more frail. She is at the stage that Aunt Winnie was at two years ago, when everyone asked her at every sentence to repeat herself and to speak louder. It used to irritate my mom a bit. She'd scold Winnie and tell her she wasn't a lip reader. Now my mom understands. She says, "I'm not trying to speak softly, I just can't find the breath."

She lives with my brother in Jamaica now. We all understand she's not just there for a while. This is her home now. He is taking good care of her, making sure she gets exercise twice a day, and arranging for a physical therapist to work with her twice a week. He says she's stable.

A few days after she got to Jamaica on August 4, she went to her baby sister Grace's 87th birthday party, which was held at my cousin's house. My brother says my mom came home hours later, shaking and weak from hunger. He was frustrated and perplexed. He observed that a spread of food had been laid out at the party, and asked her why hadn't she eaten. She said her hands were shaking too much, and she didn't want anyone to worry about her. My brother called me the next morning, abject. He listed the family and friends of my mom who were at the party, people she has known for seven or eight decades. He said, "How could she not feel comfortable eating in their company?"

Afterwards, I spoke to my mom. She told me how appalled everyone had been to see how frail she looked, how thin and small. Apparently everyone made a fuss about it, murmuring, "Gloria, what happened to you?" She said, "I saw my decline in their eyes." And she said, "I think I will just stay in this room now and not bother to go out." I wanted to cry. Many people come to visit her. And she does occasionally go out of the house, despite what she said. But life continues to shrink for her, and I know she looks to her sister Winnie, and she's scared.

Meanwhile, I am here in New York going to and from work each day, filling my evenings with dinners with women friends and the company of my husband, missing my elders, missing my children, and thinking that those cultures in which everyone lives out their lives on the same compound, all the generations together, might be on to something. I think sometimes we have taken independence and individualism too far.

That said, I remember the exhilaration of being on my own when I went to college. I remember I barely gave my parents a thought, so absorbed I was in the new life unfolding for me. (Well, it's not quite true that I never thought about my parents, because now I recall that I wrote my mother long descriptive letters about who I was meeting and what I was learning, and she wrote me back, with lists of the words I had misspelled, corrected at the end of her letters. I've always been so amused that she did that, endeavoring to teach me still.)

As apprehensive as I was the summer before college, leaving home was an exciting time, full of experiences that schooled and enriched me and forced me to grow in the understanding of all I could do. So as life shrinks for my mom and seems stalled momentarily for me, I take comfort in knowing that it is expanding by leaps and bounds for my children and I am at peace.