I haven't been writing and commenting much, there's so much going on and I can barely process it all. But this morning, I am twisting again with anxiety, I feel it slithering through me, and I need to get a handle on it all. Finances everywhere are so damn tight. I won't talk about mine, because all that happens is my son reads it and begins to deny himself basic needs in the name of saving us money. And that makes me crazy. Neither of my children is unreasonable about money. They're both conscious and responsible, and both got themselves jobs on campus without our ever directing them to do so. But my son has this instinct to deprive himself of things I think he needs just to function optimally and perform in an academic context. At the start of the year, he cut his meal plan to save money, for example. It thought it was a bad idea, and argued with him for a compromise. I also worry he's working too many hours. He's the assistant aquatics coordinator and sets up all the swim meets and schedules and supervises the lifeguards at the college's Aquatic Center. And he's a swimming instructor, too. He insists he wants nothing for Christmas, but I am incapable of not putting a gift for him under the tree. Yes, the gifts will be modest this year. Suffice it to say it's time to pay spring semester tuition for both kids, and we are counting carefully.

But the finances that really have me brooding this morning are Aunt Winnie's. She has now lived long enough that the money she has coming in for pension and social security is no longer enough to cover her needs. God, when I just wrote that, and looked at it in plain type, the tears overflowed. I had no idea I was about to cry. I realize I am scared and overwhelmed from trying to make her money stretch. Yesterday, the disability trust, to whom I submit her bills, called and said they didn't have enough on account to pay her phone and cable bill, which sent me into a round of recorded menu loops with the phone and cable company trying frantically to determine how many days she had left before they cut off her phone. Which she needs to service her pacemaker. Plus, a woman who can't get out of bed needs to have phone and lights and a working TV. We have 22 more days to bring the bill current. This means that I will need to pay her bill and have the trust reimburse me when her December payment posts. But that will create another shortfall. Meanwhile one of my cousins is giving Aunt Winnie's jobless daughter money every two weeks and she needs to be reimbursed. I feel like I'm screaming my head off but no one can hear.

The reason my aunt's money is tighter than ever is that our co-op has not only raised maintenance charges by thirty percent, they also added a six-month thirty percent assessment on top of that to pay for all the facade and roof repair and chimney and boiler replacement construction projects they have been mismanaging for the past four-plus years. At the same time, Citibank closed down my aunt's line of credit. They said they were cleaning up "outdated technologies" but I think they shut her down because she is old, and they think she's going to die soon and they don't want to be left holding the bag. Had I known they were going to close it down, I would have withdrawn every penny she had there, instead of trying to be so fiscally prudent on her behalf. Now, that safety net is gone, and her retirement income just won't cover everything. I don't quite know what to do, because I can't personally cover the shortfall. And everyone else in the family is having their own struggles. Besides, any contributions family members might make would only be a temporary fix.

My mom called this morning and asked could we send money to my cousins in Canada who are having it hard. And to my aunt in New Jersey whose family got so battered by Hurricane Sandy. I took a deep breath and for the first time ever I said to her, No, Mom, we can't. Not right now. In February, maybe, but not right now. I think I needed to write this down and look at it plain. I needed the release of crying. 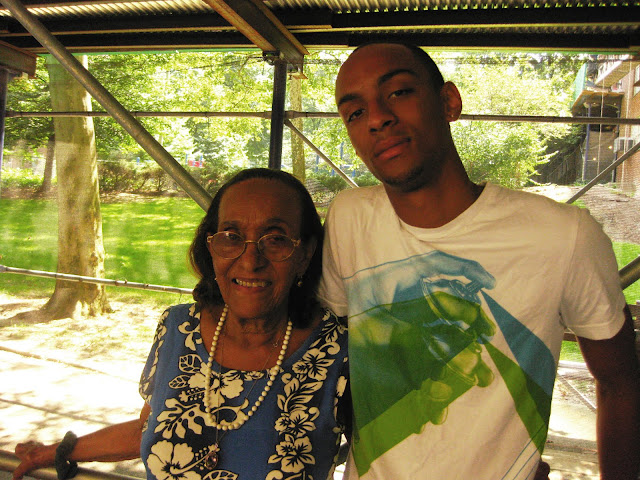 This is how I know that the scaffolds around our buildings have been blocking out the light for going on four years. This photo of my son and my mom was taken in August 2008, on the morning we left to drive him to his freshman year of college. My son will graduate this coming May. I'm noticing in this photo that my son and my mom have the same high foreheads. How I love those brainy foreheads. Better that I meditate on this.