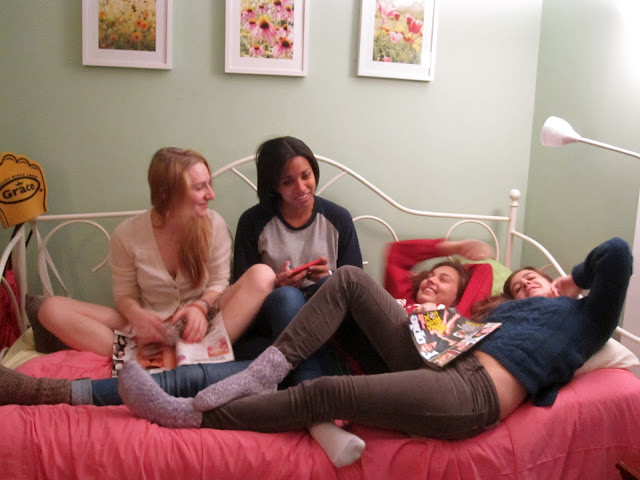 Last night was festive, with my daughter and three friends skipping up and down the hall between the kitchen, where they mixed up a batch of cupcakes after eating dinner, and her room, where they lounged on the floor looking at old photographs of themselves, and then on the bed, all of them pretzeled and reading magazines, talking and laughing and catching up. It was just four of them, but their energy was a lovely whirlwind, bouncing and skipping and laughing and talking all at once, and I lay on my bed, fighting a cold and watching Parenthood on Netflix, and I smiled at the sounds from all corners of my house. 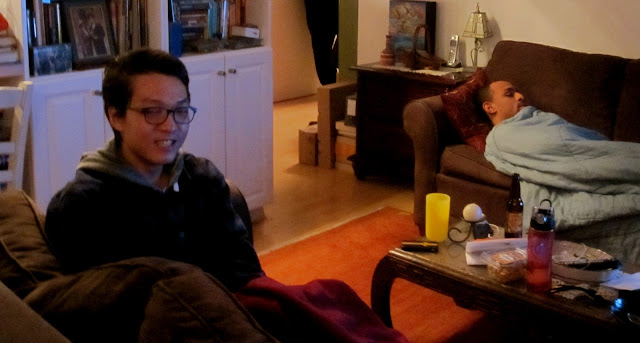 In the living room the men watched Knicks basketball. Yes, the men watched sports and the women cooked and read magazines, but sometimes in our house the men cook, too, and the women watch basketball, so don't make too much of any of that. My son's friend from college, a kid from Taiwan whose flight home isn't until Monday, wrapped himself in a blanket and cheered the Knicks on with my husband and son. They did not move from their respective couches except to eat dinner, and then they settled back down, getting used to having nothing they had to do. 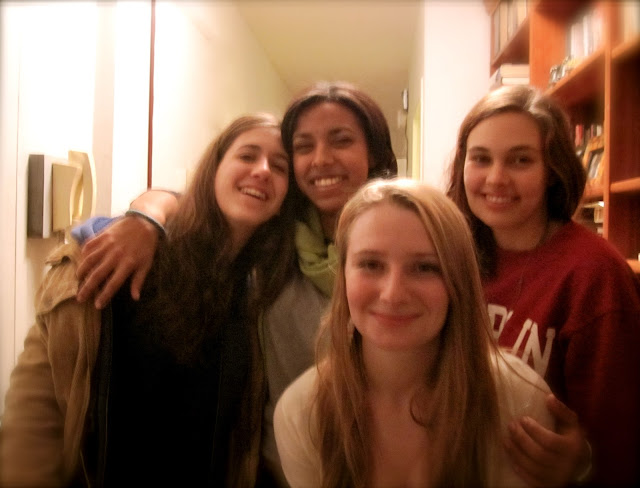 One of my daughter's friends slept over and I have no idea when they got to bed, as they were still skipping up and down the hallway when the rest of us turned in. I pulled the door to my son's room shut so his friend might actually get some sleep, as those girls sounded as if they were ready to go all night. My son, as usual, made the living room couch his bed for the night. I don't know exactly why he loves sleeping there, but this has been true since high school. I let him. Don't sweat the small stuff.

This morning my husband left early to go and get poinsettias to decorate the church sanctuary for Christmas service tomorrow, and every one else kept sleeping. Finally I got up, showered and dressed for the day, and checked on Joe, my son's friend. He was awake, politely reading in bed and no doubt wondering at the absurdly late hour of rising in our household. It was almost ten. I asked if he was hungry and he said, "Yes, actually," which probably meant he was ravenous. I told him come on out to the kitchen where he sat at the counter and I fixed him a cheese, tomato and onion omelet, the two of us chatting. Very sweet kid. Polite but not stiff, and very willing to share his story. As we sat there chatting, my son in the living room slept on, and it occurred to me that when my son brings a female friend home, he's always up before her, fixing her breakfast and making sure she's taken care of. But when it's a male friend, those boys are on their own.

Eventually the girls emerged. My daughter was rushing by then, because she was supposed to meet some of her high school friends to bake cookies and hand out to an AIDS hospice and a firehouse, something that particular group has done every year since 9/11. Apparently, they have decided to continue to tradition. My son and his friend left to go Christmas shopping shortly after the girls banged out of the house, and then it was just my husband and me, looking at each each other, laughing and not even having to explain what we were laughing about. The clamor and the noise. And then blessed peace. I love it all.