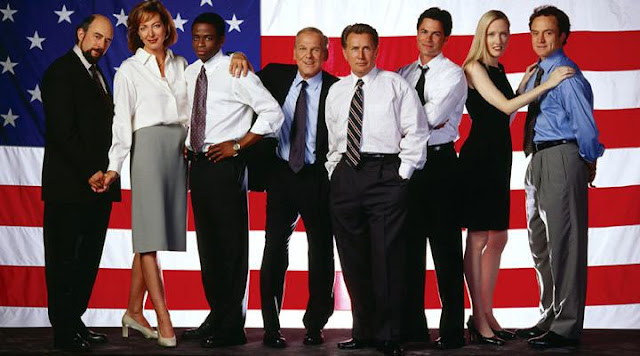 So I am now watching The West Wing, still in season one, and I think I missed my calling. I want to work in The White House! I would have been a crack speechwriter for President Bartlet. I looooove this show. I didn't watch it when it was on television, and when I first started streaming it on Netflix, its 1999 vintage was a little blurry to this eye that had become so used to high definition on my sweet little Kindle Fire (and, no, neither Netflix nor the makers of the Kindle Fire are paying me a dime in promotion fees, though by God, they should). But by three shows in, the action appeared as hi def as anything I've ever watched, either because the technology had caught up, or because I was already so hooked on the drama, the camaraderie, the moral conundrums, the characters. Most fascinating to me is how contemporary the issues are—gun control, stimulus packages, overreach of federal power, terrorism events, bickering congressmen, political threats and deal-making, super storms, all of it seemingly ripped from today's headlines, yet the show originally aired more than a decade ago! Were the writers so prescient or has so little changed? In any case, there are seven delicious seasons, almost two hundred shows in all. I have found my next curl-up-and-escape jones for sure.