It was a thrilling weekend! We drove north to see our son compete in heptathlon for the New York State Collegiate Track Conference Indoor Championship. The meet was conveniently held at his college's two-year-old super duper athletic facility, and the State swim championships were also being held there this weekend. Conveniently, both my children go to college in the same town, so we could spend time with both on this one visit. 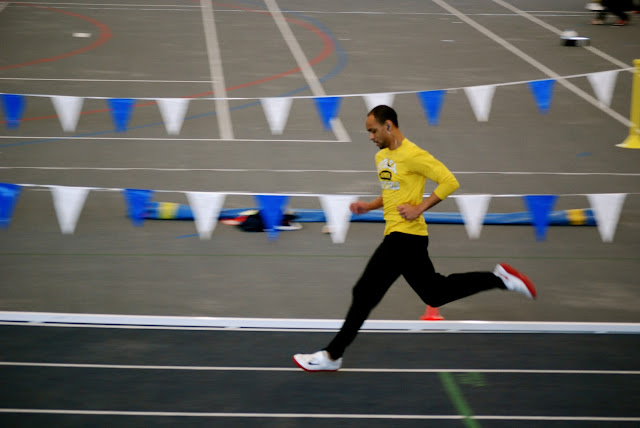 As a heptathlete, my son competes in seven events: the 6o meter dash, long jump, shot put, high jump on day one; and on day two, 60 meter hurdles, pole vault, and the final 1,000 meter race. Heptathletes generally have mastery in three or four events and stronger than average skills in (most of) the rest. They aim to turn in decent performances in their weaker events, with their strong events boosting their overall score. Our son's best events are hurdles, high jump and pole vault. While most of the team sits out most of the two-day meet, waiting for a single event or two, my son and the team's other heptathlete are on the field all the time, competing in one event after the other, with 30 minute breaks in between. So if you're there to watch them in particular, you're fully engaged the whole way through.

Our son had had that awful puking flu earlier in the week and wasn't even sure he would be able to compete. I didn't write about my anxiety over this earlier because this blog was just getting to be too much bad news, and after a day of puking his guts out, it was clear he was on the mend. But this meant he was still feeling weak and headachy as he began his events on Friday morning. He equaled his PR (personal record) in the 60 meter race, but was less than happy with his showing in long jump. We could see he was wound tight, and I knew he was over thinking things. He didn't equal or even come close to his PR.

Next was shot put. I had never before seen him perform in shot put, and I was mesmerized. The movements to set up the throw are like a precisely choreographed ballet spin, and he was so perfectly graceful, his form and motion exquisite to my eye. He threw decently enough, but not what he wanted, as he was now trying to make up for low scores in the previous event. 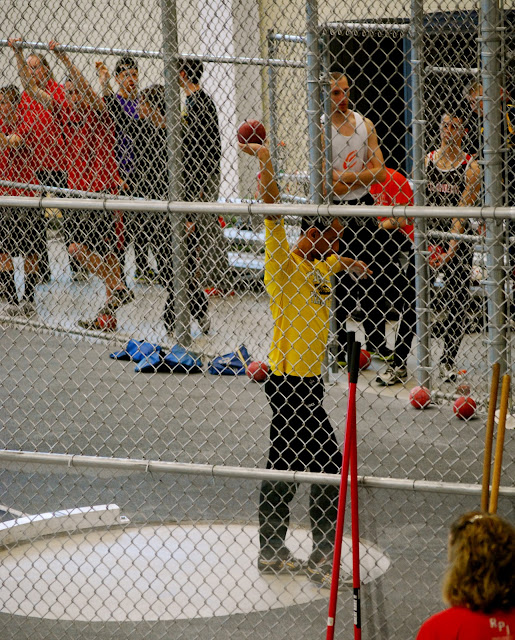 After shot put, he ran up into the stands to greet us for the first time since our arrival, sitting between us for a while, our arms around his back. He said, "I'm sorry you have to see me turn in such a crap performance." We told him it didn't matter, it was just great to be able to see him perform. I really meant that. I didn't care much what scores he posted, I loved just watching him. But of course, he wanted more, maybe especially because we were there.

The next event was high jump, which he has been doing since high school. He left us and went to the locker room to get ready, and when he emerged, he had his headphones on, and he was walking with a distinct loose limbed swagger, bouncing a little to the music, his head nodding, his shoulders dipping side to side with each step. His dad and I looked at each other and smiled. We saw at once that he was feeling altogether better about this event. He warmed up and did his practice jumps and sprints. Again I marveled at his grace, the way he runs on his toes, seeming never to touch the ground.

Once the event officially began, he came into the stands and sat with us for a while, as he wasn't due to start jumping until the bar reached a little under six-feet. By the time he started jumping, much of the field had already been eliminated. Clearly he was in the flow. He kept clearing the bar until he had equaled his PR and out jumped the entire field, which greatly boosted his overall score and put him in a much better place going into day two.

We bade him good night as he and his team as they were supposed to have a pasta dinner together and debrief on the day's events. The adrenaline rush of the high jump round had done at lot to bring him back from the land of the sick, but he wanted to conserve his energy for day two, which would begin bright and early on Saturday morning. 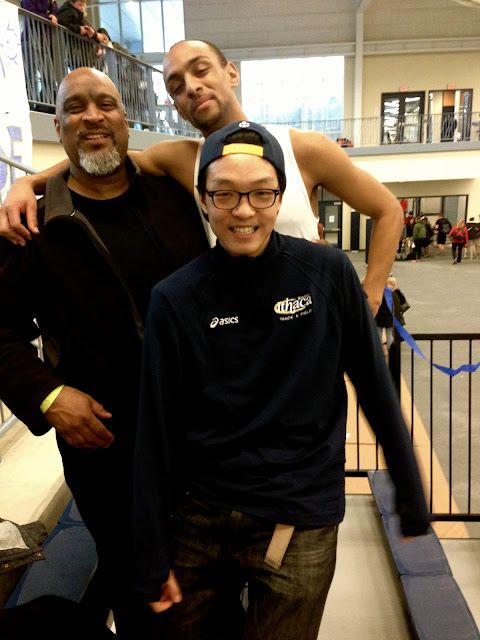 After leaving the athletic center, we drove to pick up our daughter who was in her dorm across town at the college on the other hill. She had had classes and then a job interview that afternoon with the head chef of the highly rated Tuscan restaurant that is attached to her school. She got the job, but didn't let us get too excited about it. She said, "Calm down, Ma. I got this job the day they admitted me to the school. They hardly ever say no to students who want to work there because the whole kitchen is staffed by students. They need hands." On the other hand, the chef decided to start her at a higher wage because she had that internship at the Italian restaurant in Soho last year, and because he was impressed that she had spent a summer immersed in slow food cooking in Italy. So yeah, I'm excited for her. She's had her eye on a culinary position since she got to the school (she worked in banquets last semester) and Banfi's is the top of the line there. 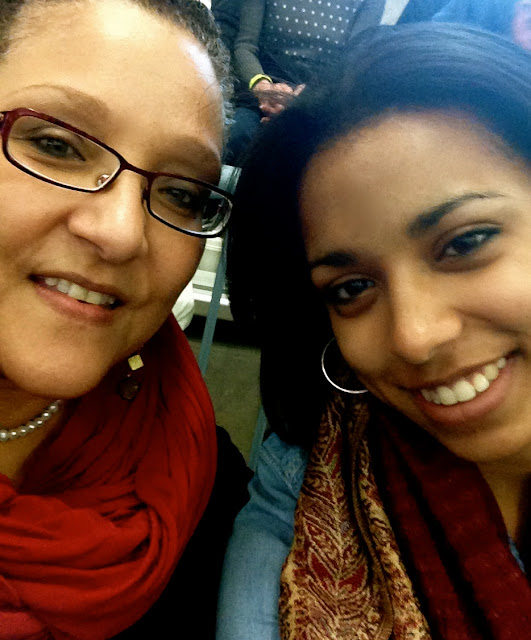 Overall, it was a wonderful day to be the parents of these two. Well, truthfully, every day is that, even the crazy making ones. But here's the thing. Day two was even better. We had our daughter with us for the entire day in the stands, and we were all there to witness an unexpected highlight in our son's athletic career. 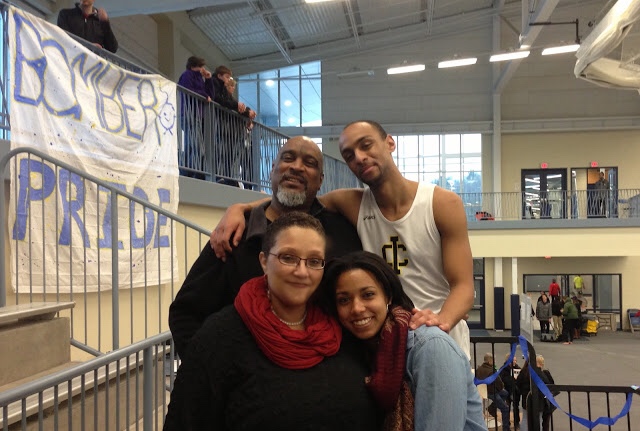