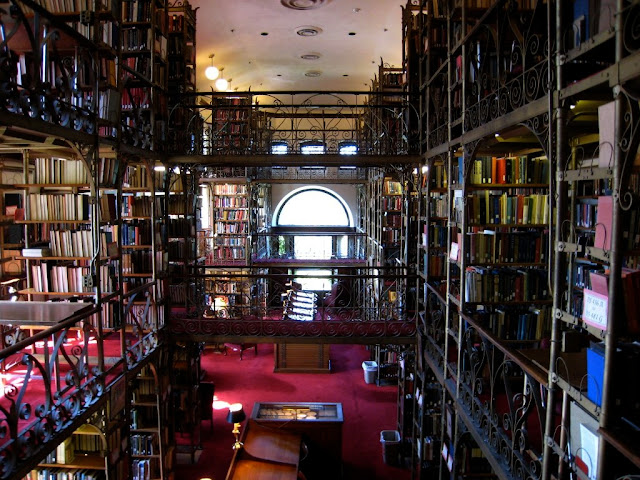 You may recall that my daughter chose her high school based on the fact that its dining hall looked like something out of Harry Potter. Well, now she lives in a place with libraries, one in particular, that could have existed within the fictional Hogwarts Castle. It's sort of magical the way this girl creates her world.

Speaking of creating worlds, I was in a happy, silly mood yesterday. First, I could not stop laughing over this VW Super Bowl commercial, despite the debate among my coworkers about whether it was offensive or not. A whole article appeared on Thedailybeast.com about how the ad makes a mockery of the Jamaican accent, and therefore Jamaicans. Meanwhile the Jamaican minister of tourism and entertainment says the ad is "a perfect illustration of Jamaica's global reach" and considers the commercial all in good fun. I am Jamaican born, and I am not in the least bit offended by the commercial. And furthermore, Jamaican singer Jimmy Cliff is getting paid for his remake of the jingle "Come on, Get Happy," every time the ad runs. Lighten up, people. There is so much to get offended by in the world. This isn't it.

Then, browsing over to Slate.com, I happened on a story about Thursday's senate confirmation hearings for Obama's Defense Secretary nominee Chuck Hagel. The story was titled "Fluster Chuck." Yes, the hearing was full of grandstanding buffonery, and Hagel was somewhat flummoxed by some of what came at him, but my response had nothing to do with politics. The headline just struck my funny bone and once again, I couldn't stop laughing. Even when I came home and tried to tell my husband about it during our Friday night libations, I found myself dissolving into giggles before I could even get the story out, kind of like my Aunt Maisy would do. And sure enough, he was laughing before he even heard what I was trying to tell him, so far gone was I.

Maybe after the week that was, I'm finally learning how to operate my pressure release valve. May it ever function the way it did yesterday.