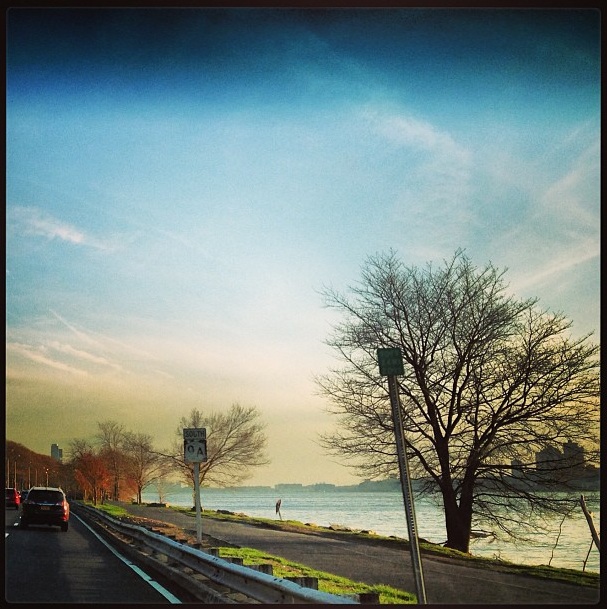 Our girl came through overnight on her way back to school from Boston. I miss her now that she has swept back out, back to her life away from us, her most real life. It was good to see her, even for those few hours. It was especially good to curl up with blankets on the couch and catch up on things. She looks good, she seems well, as far as I can tell, but how far can I tell, I wonder? She's so capable, the way she set her alarm and was up and showered and packed and hugged us tight and was out the door this morning, knapsack on her back, pulling her rolling weekend bag behind her.

She just texted me that she ran into her friend at Port Authority, the one she used to take the school bus with from pre-kindergarten on. Yes, I did put her on the school bus in pre-K. She and this other kid were the only two four-year-olds whose parents dared to have them ride the bus. They were fine, and half the class joined them the following year. By then these two were bonded as bus buddies. Now this young man goes to college in the same town as my daughter, and he was taking the same bus back to school as she was. They're bus buddies again, haha.

Hard to believe she has just two more weeks of freshman year and then finals, and then we will all gather for her brother's graduation. And then—what? I don't know what comes post college. We're about to chart new territory here. Our son is eager to be done with school for a while. He has no desire at this moment to go to graduate school in anything. He wants to be an EMT/paramedic/firefighter with the FDNY. That's his plan. A couple of track and field coaching opportunities might also be coming his way.

Sometimes life is just one big ache. And worry. I think too much, that is the whole cause of it. I feel vaguely uneasy this morning and I can't figure out why. Maybe I simply miss everyone I love who is away from me. There is such comfort in the physicality of our loved ones, in being able to circle them with our arms and inhale the salty sweetness of them. And keep them safe.