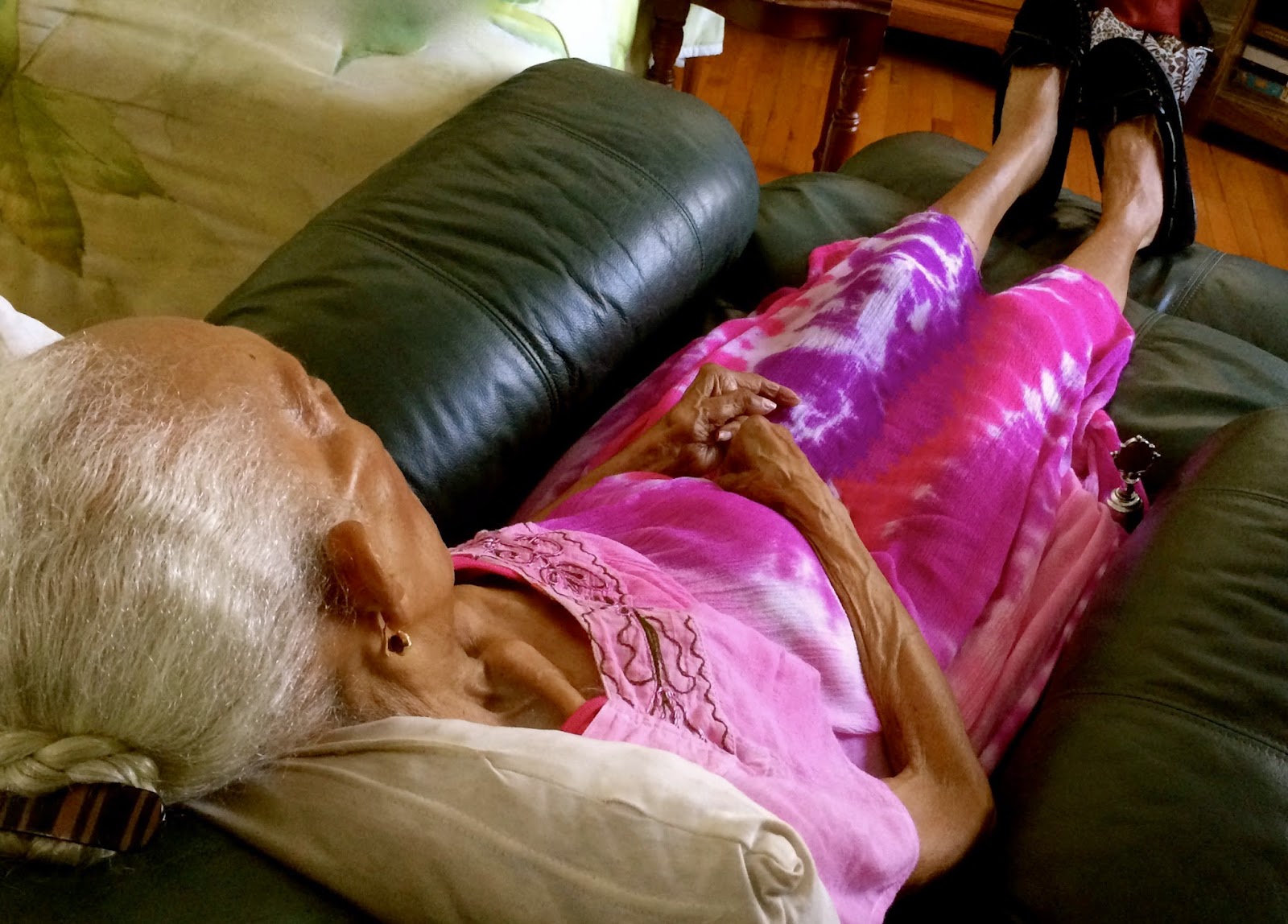 I got to Kingston last night, my mom already in bed when I came, but we sat together in her room, my brother and sister in law, my niece and nephew, and the lovely woman who is on night duty this week, and we chatted and laughed and caught up as my mother dozed in and out under her plush red blanket, and at one point she said clearly and loudly, "It is wonderful to hear all these so loved voices around me," and my 13-year-old niece said, "Wow, Grandma, we heard that!" Because my mom speaks so softly now, and sometimes you're not even sure she's saying words you would recognize if you could only hear them, but that sentence came out strong and contented.

There are new symptoms since she got chikungunya, even though she contracted a fairly light strain of it. Her left shoulder hurts all the time, and she is thinner than she was before, although I did not think that possible. At night, her arms and hands tremble until she falls into a deep sleep, which she did not do for some hours last night. Instead she talked in her almost sleep, and at first I tried to engage her, asking questions, but the caregiver, who sleeps on a futon under the window across from her bed, said kindly, "You need to just let her talk until she's done talking," and so I began to listen instead, not trying too hard to understand, picking out random sentences here and there.

At one point she called for someone in her vision to help her hold a tray: "Come and help me hold this, sweetheart, because my hands are tired. Okay, set it over there." She spoke gently, the way she did to her grandchildren when they were younger and they were helping her set up for one of her famous tea parties with the good china and silver tea service. I imagined a beautiful tray laden with the finger sandwiches of finely grated cheddar and thinly-sliced cucumber, all the crusts cut off, delicate triangles artfully arranged. It made me happier to imagine she was holding an elegant tea party in her dreams, because she was so in her element at such times.

Later, she seemed to be talking about a picture on a wall, and the need to straighten it and put the frame around it just so. And throughout, this sentence, clear and whole, "God has been so good to us. He clears the path for us always and his light shines down," said again and again, her hands rising into the air of their own accord. I just listened, grateful to be there, scared she might die as I lay beside her, and so overcome that my cheek was wet at times, and I tried to just be in the moment, come what may.

Eventually she slept. It's morning now. She has had breakfast of a cheese omelet and ginger tea. She has a little trouble swallowing sometimes. The caregiver who is on day duty this week is patient and gentle with her, such wonderful women my brother and sister in law have found to care for our mother. My mom is dozing now, HGTV's The Property Brothers a soothing backdrop of sound. I am getting ready to do actual work as I don't have the luxury of a week off, but I do have the luxury of sitting next to my mother's chair as I type this, and kissing her forehead whenever she opens her eyes.