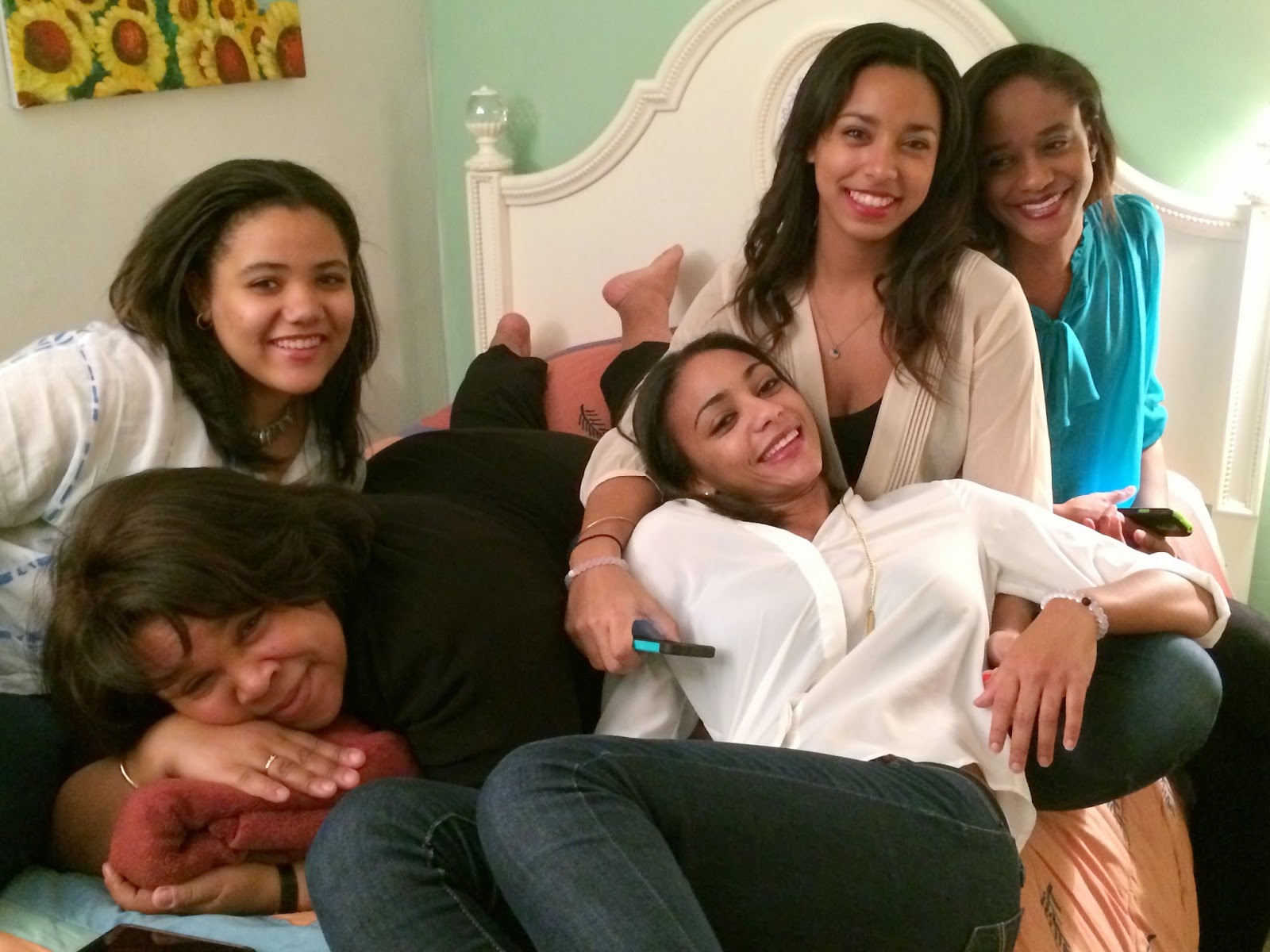 Thanksgiving this year was fairly low-key, with people communing in all corners of the house, then coming back together to laugh and tells stories some more. My daughter and my niece arrived on Tuesday and my cousin and her daughters arrived on Wednesday. That night, while my husband began the Thanksgiving cooking and my son went to an annual reunion of camp friends, seven of us women drove through the cold and snow to catch an 11 p.m. showing of Mockingjay. I had booked us at the theater with the red leather recliners, and I confess I dozed a bit, which was not the fault of the movie. I felt happy to have my daughter home, and my beloveds around me. 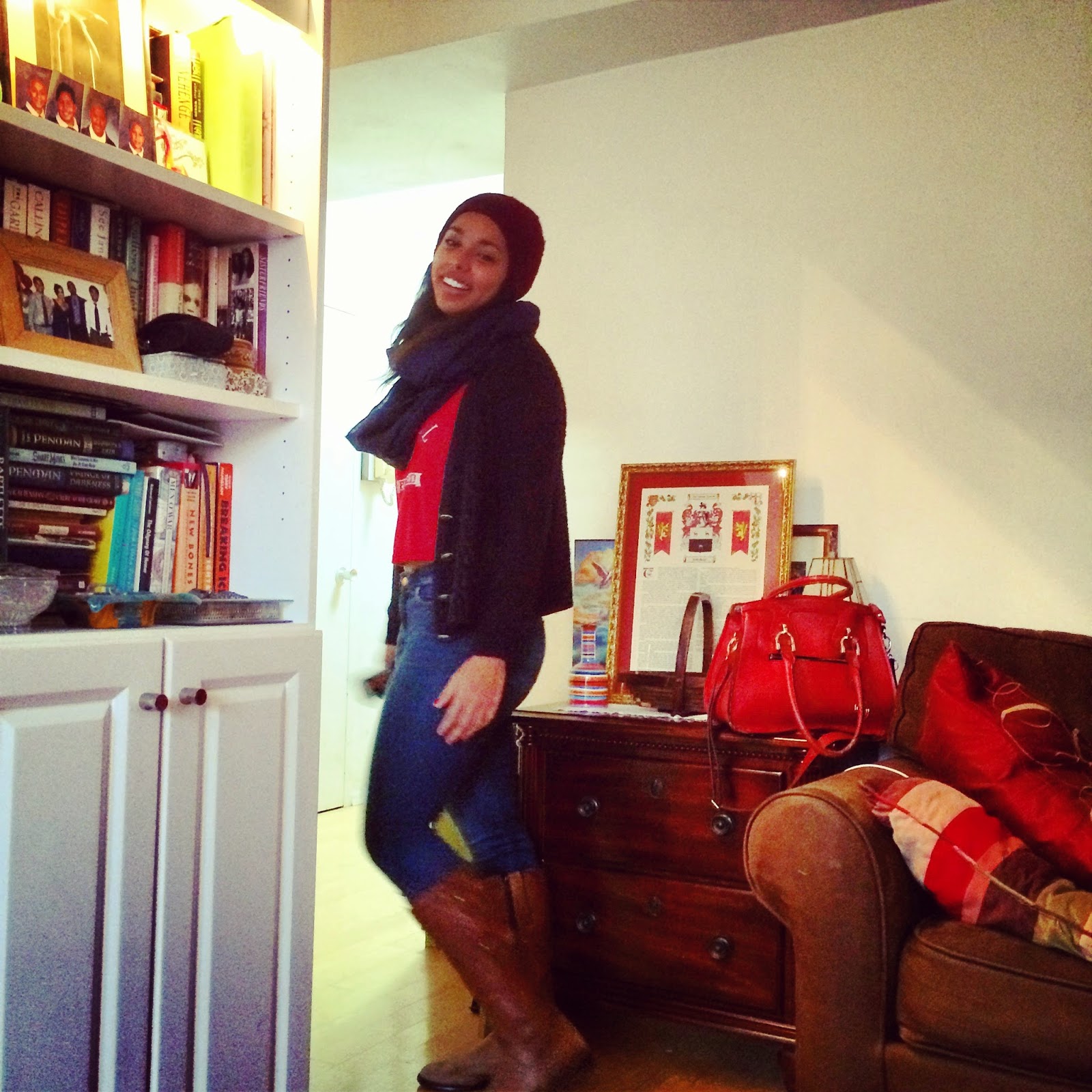 Earlier, my daughter had gone to a hair salon appointment. Outdoors it was raining and sleeting, the temperature falling rapidly. 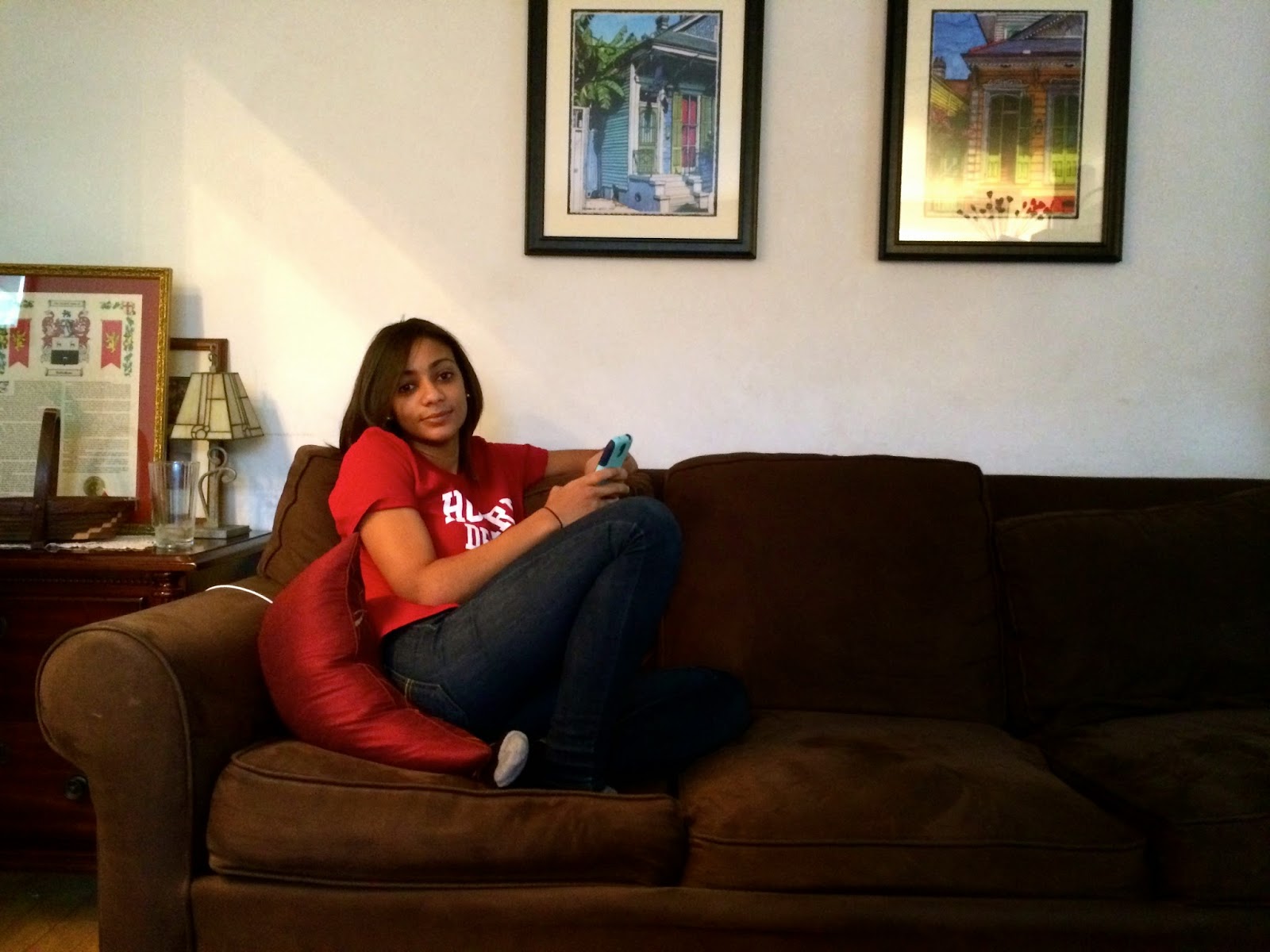 My niece went to the salon too and came home with a dramatic new haircut that looked even better than the photo she had showed us of what she wanted. We had all opined that she shouldn't do the big chop because she's so busy right now and who wants to have to fuss with styling hair when one is in dental school? She cut it anyway and it looks fantastic. What do we know? 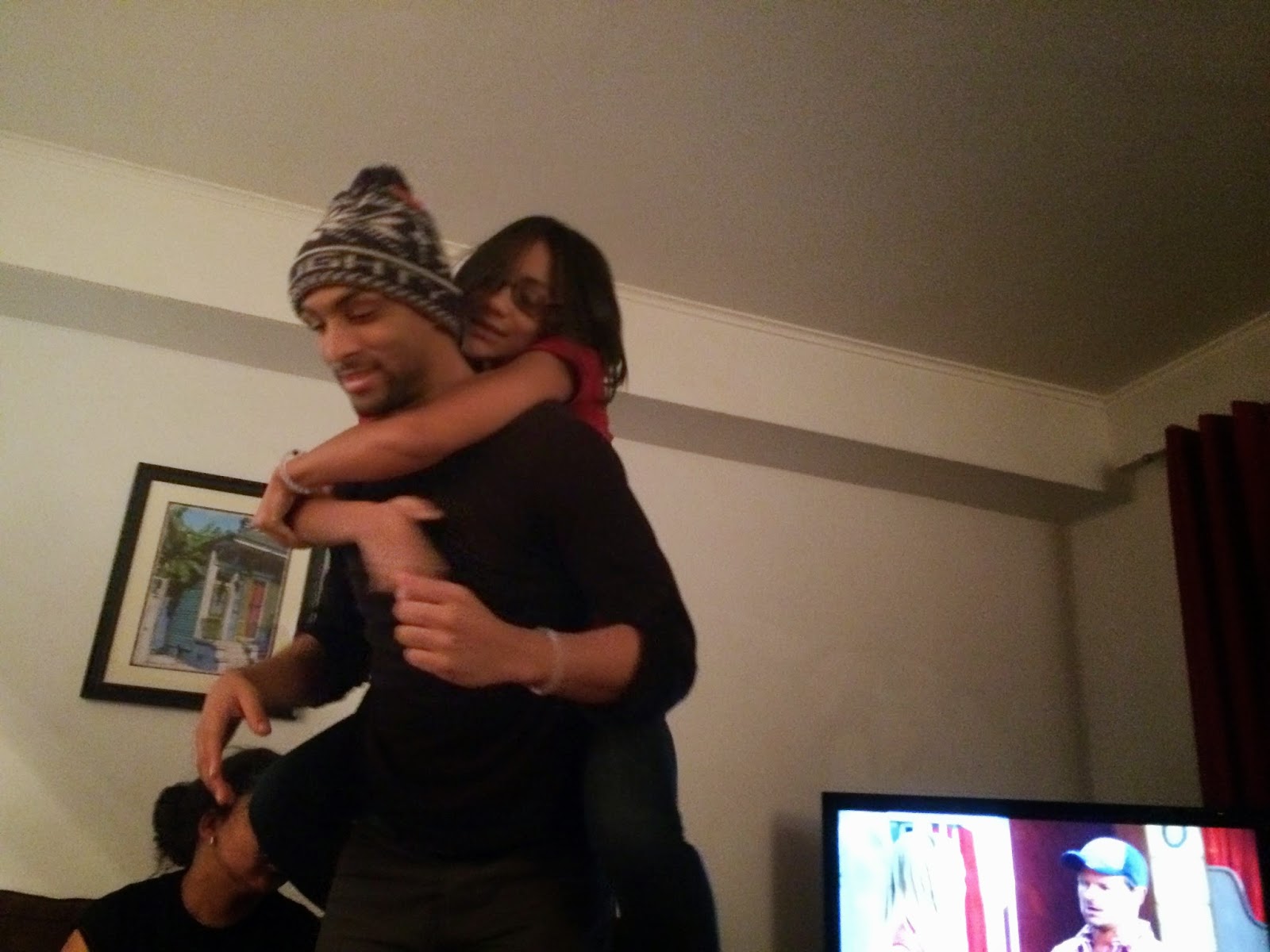 My son was at work all day on Wednesday. When he came home, his cousin leapt onto his back. He is used to this, so he walked around greeting everyone with her still attached at his neck. My brother and I did such a good thing making sure these cousins grew up close, like siblings. 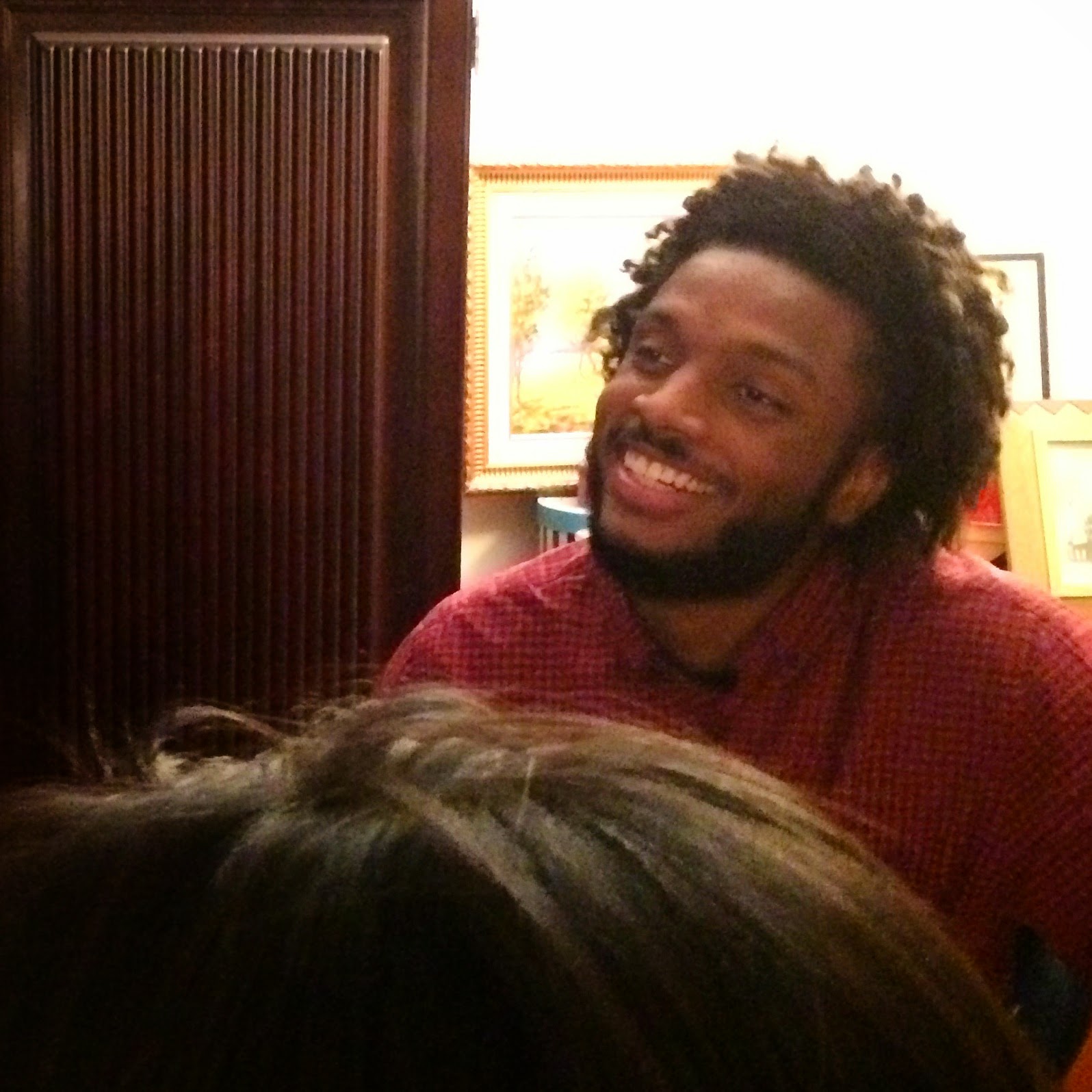 My heart son E. was also home for the holiday. He's growing his hair out for dreadlocks. He used to wear them as a kid, and they were just beautiful on him. His hair is in that in-between stage now. I think he's in a kind of spiritual transition as he figures out what he wants to do with his life when he graduates college next year. My daughter and E., who attend college in the same town, had their heads together, sharing confidences. Later I asked her how he was doing. She said, "He just basically wants to be a good person and he's figuring out what that means for him." 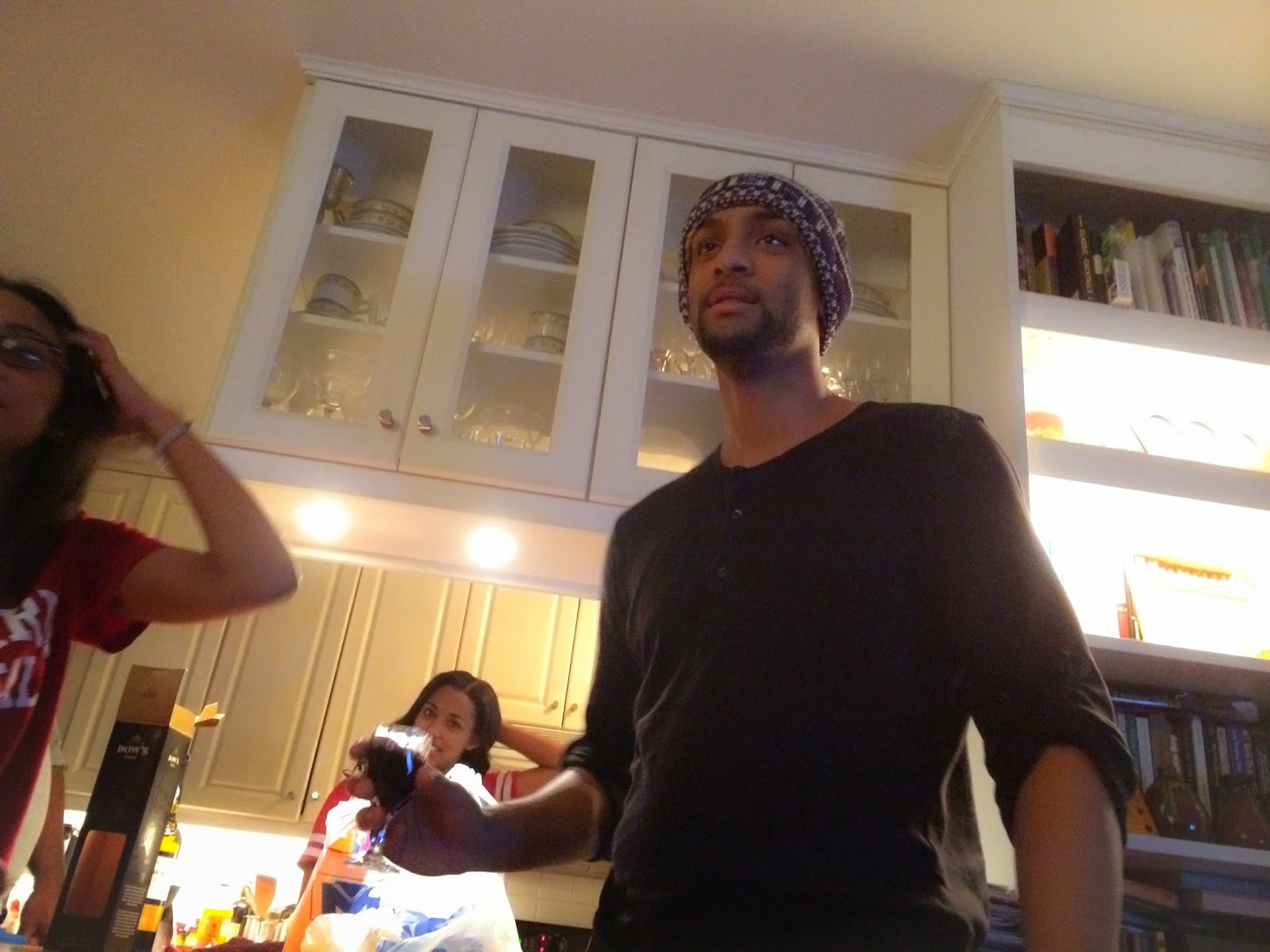 We broke out the good port that my cousin Nicki had brought from Trinidad. She is an international health consultant and travels all over the world for conferences and contracts. She and my son a great friends. When my son turned 21 two years ago, my cousin began instructing him on how to drink responsibly—and well. They do love raising a glass of good port together. 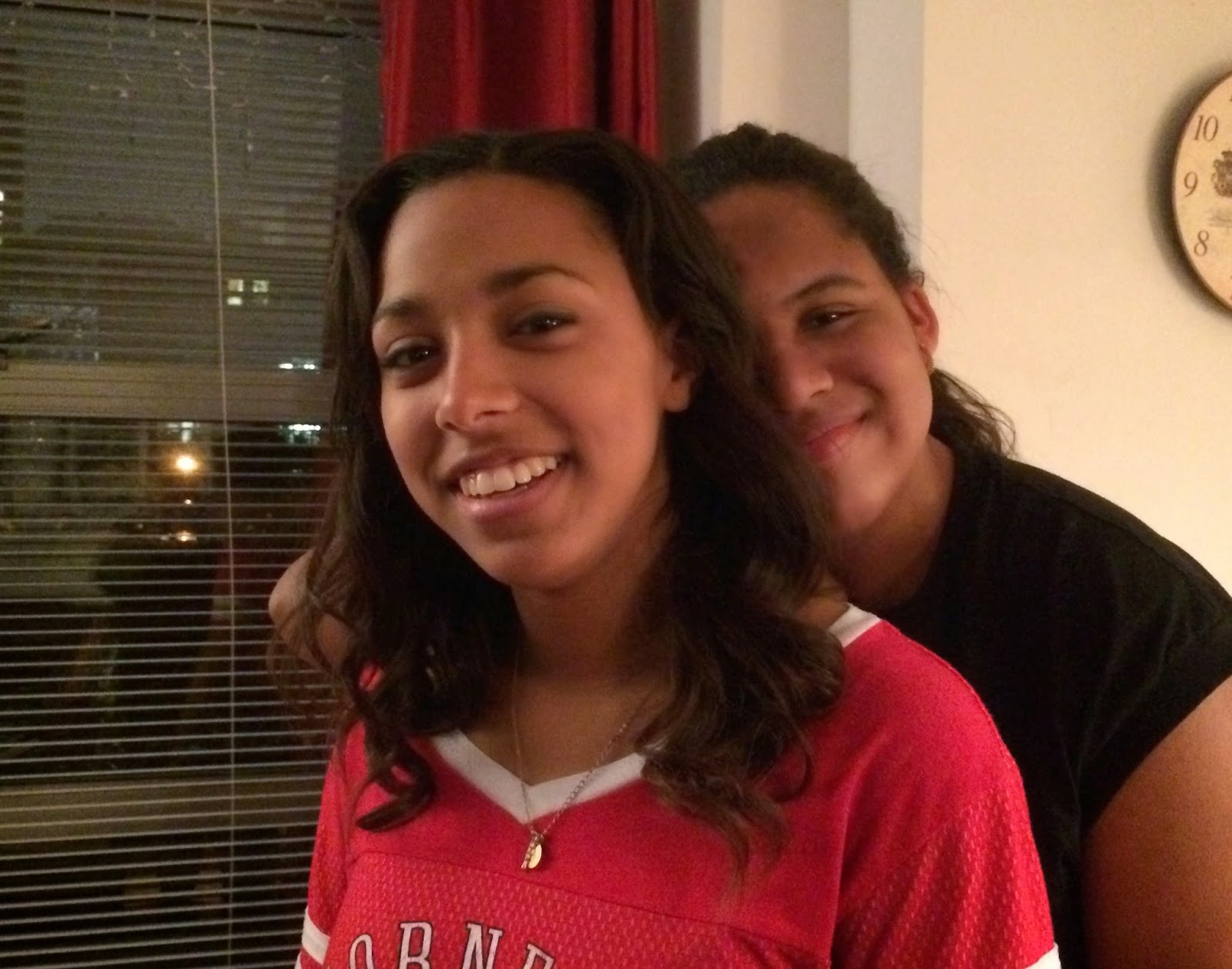 My daughter and my niece were catching up on each other's news. This niece, a wonderful photographer, has had one of her images chosen for a prestigious gallery show. She was glad to be here for the holiday and we were ecstatic too. Last Thanksgiving, she was in the hospital and having a very rough time. What a difference a year makes. 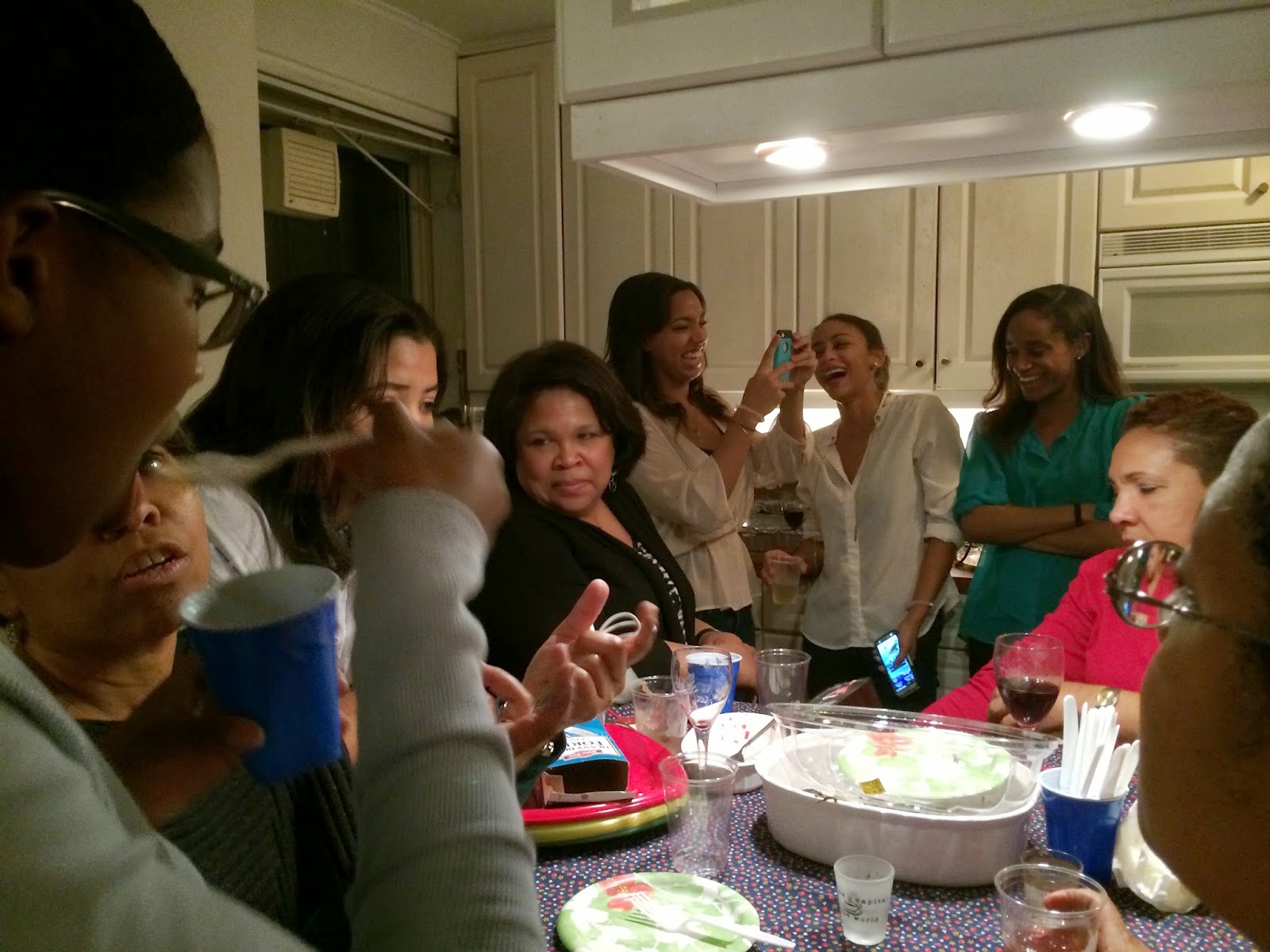 When you're eighteen people in a small apartment, everyone has to suspend their sense of personal space. I once read that the secret of a great party is to hold it in a place that is too small for the numbers so that the guests have no choice but to interact. Our Thanksgiving gatherings certainly are proof of that. 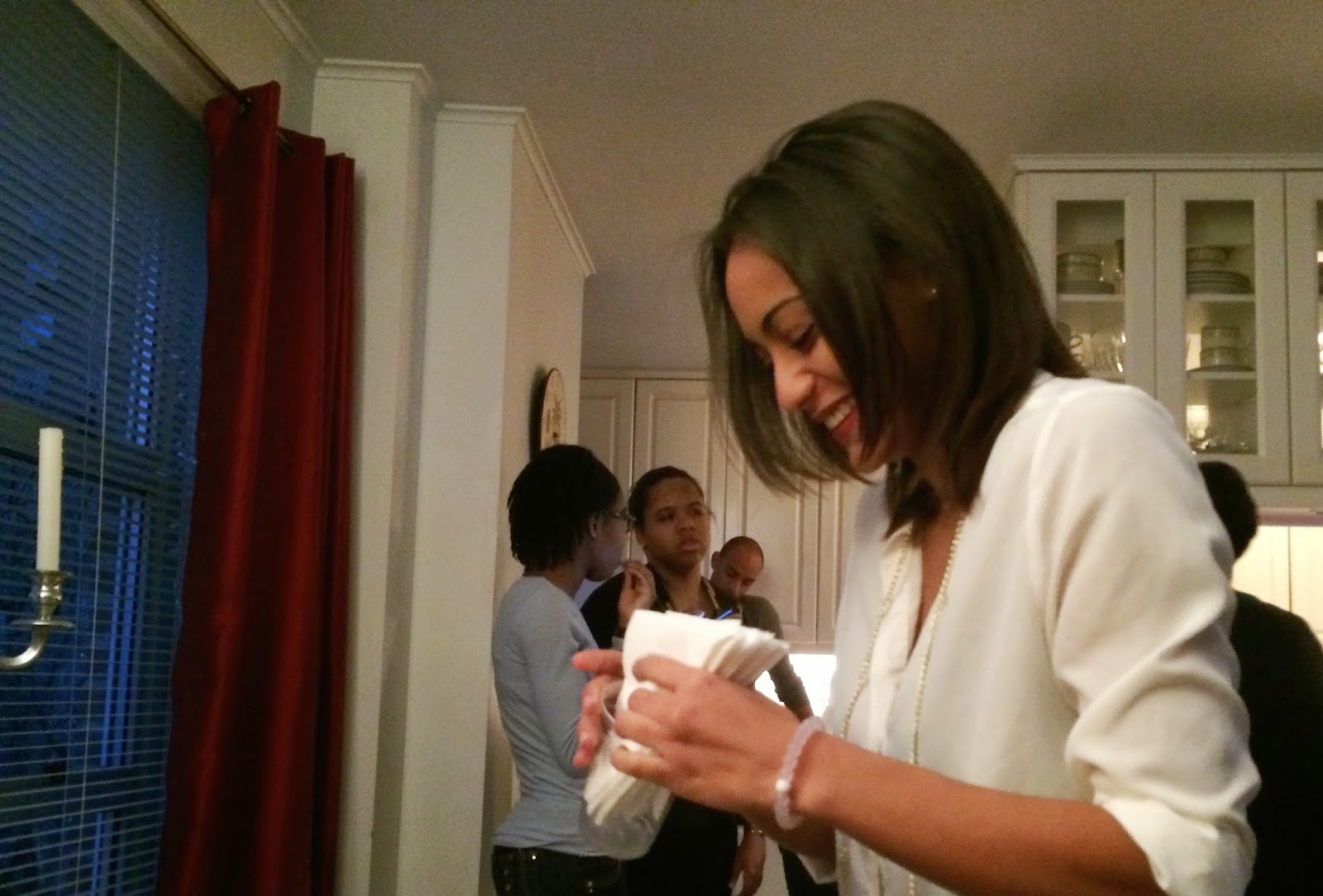 Just before dinner was served, I realized we had no paper napkins. We solved that by simply folding paper towel squares into elegant triangles and sticking them in a cup. No one cared a whit that they were using paper towels as napkins. 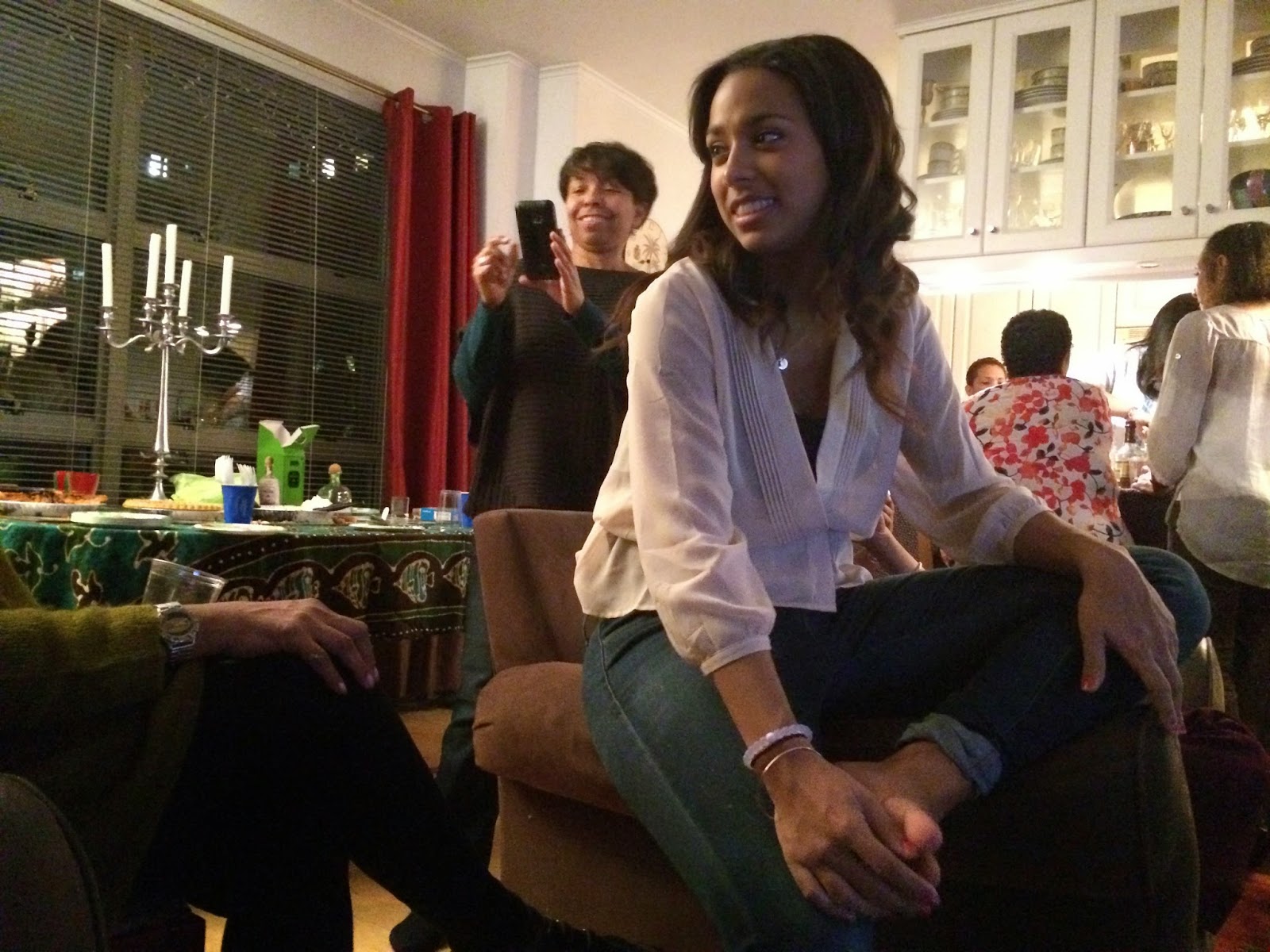 That's my cousin who lives in Boston with the camera in the photo above. She brought her two kids this year. They're 11 and 13 now and bright and social as can be. Last year they were with their father. This year they had a lot of bantering fun with their cousins. At one point, my 13-year-old niece asked her mother, "When I'm in college I get to choose where I go for Thanksgiving right?" Her mother said yes and she said, "Well then, I choose here." 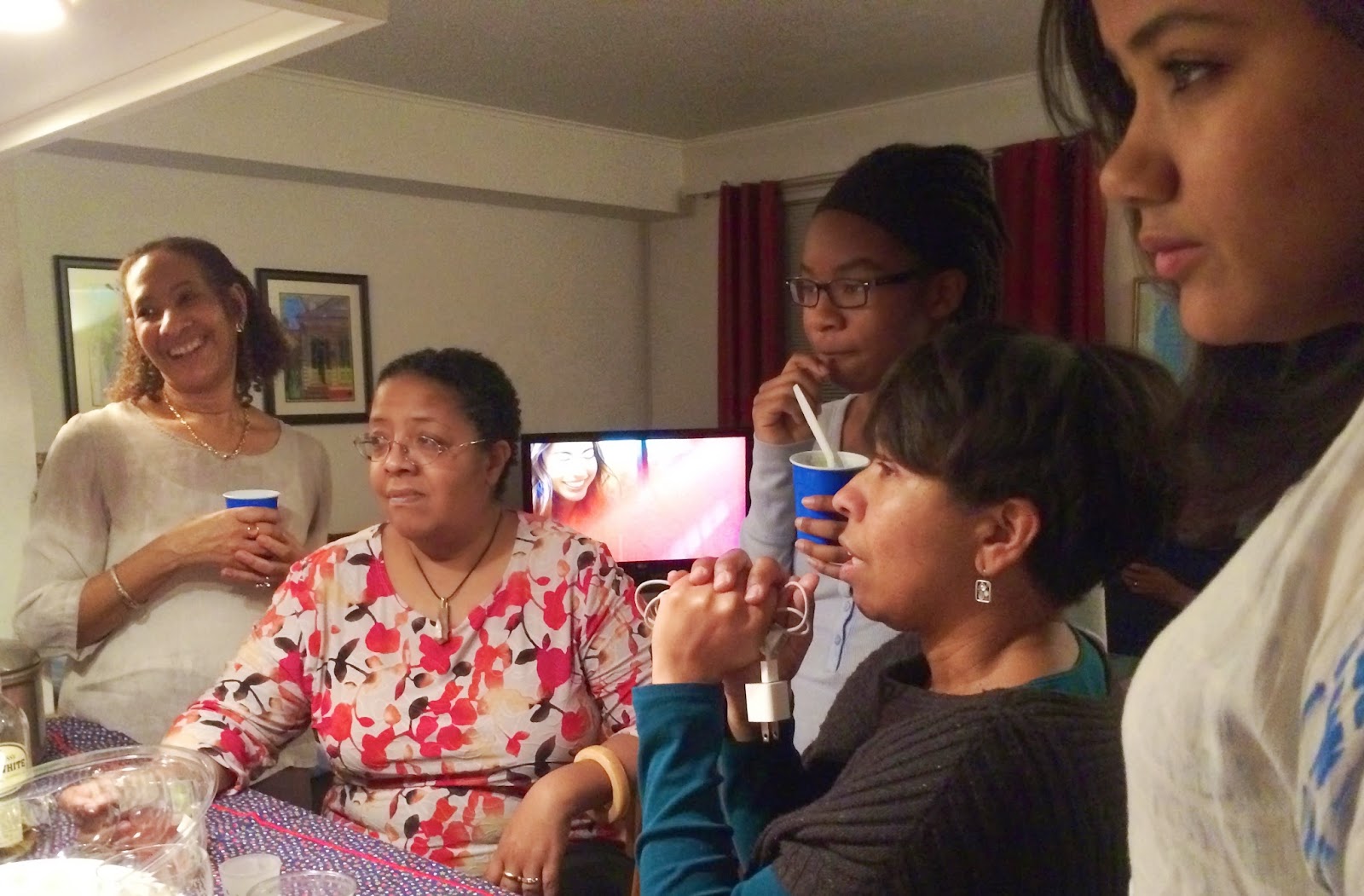 My cousin, whose husband died a month ago, held up fairly well, though she often had that thousand yard stare. We didn't have the cranberry sauce from scratch that her husband used to make. The canned stuff just didn't cut it now that we'd had the real deal. Gary's birthday was the next day, so those of us who were of age raised a toast to him in the form of tequila shots later in the evening. My cousin appreciated that everyone talked about Gary freely and missed his presence. 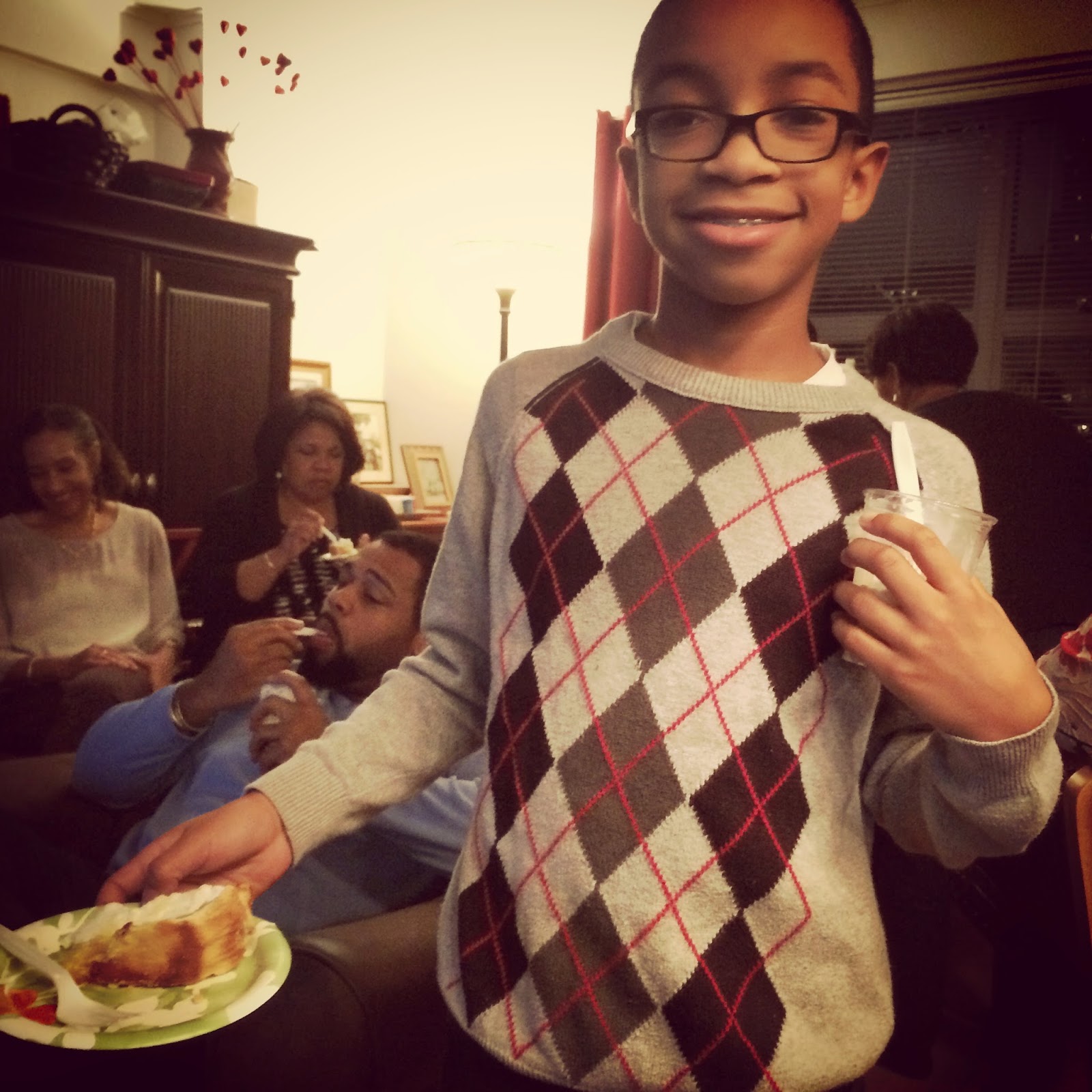 My nephew sampled apple pie and gelato for dessert. He has always looked up to my son, his big cousin, and he stuck close to him most of the evening. This kid is genius bright and knows everything there is to know about football. 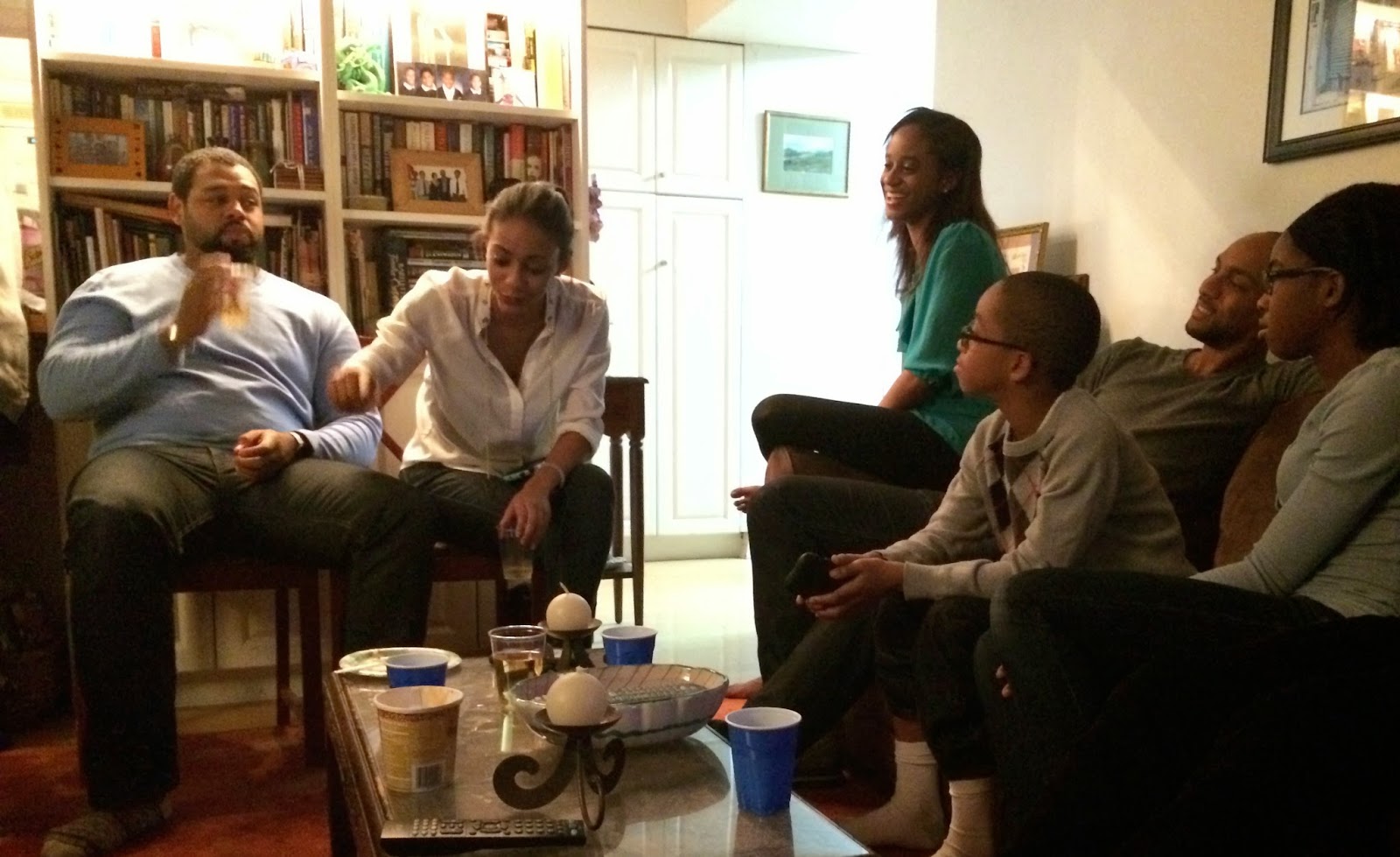 My niece's best friend from high school in Jamaica is currently doing her masters in urban planning in Philly. She joined us this year. That's her in the turquoise blouse. She's lovely. She and my niece have a similar look and people often ask if they are twins. She simply says yes. 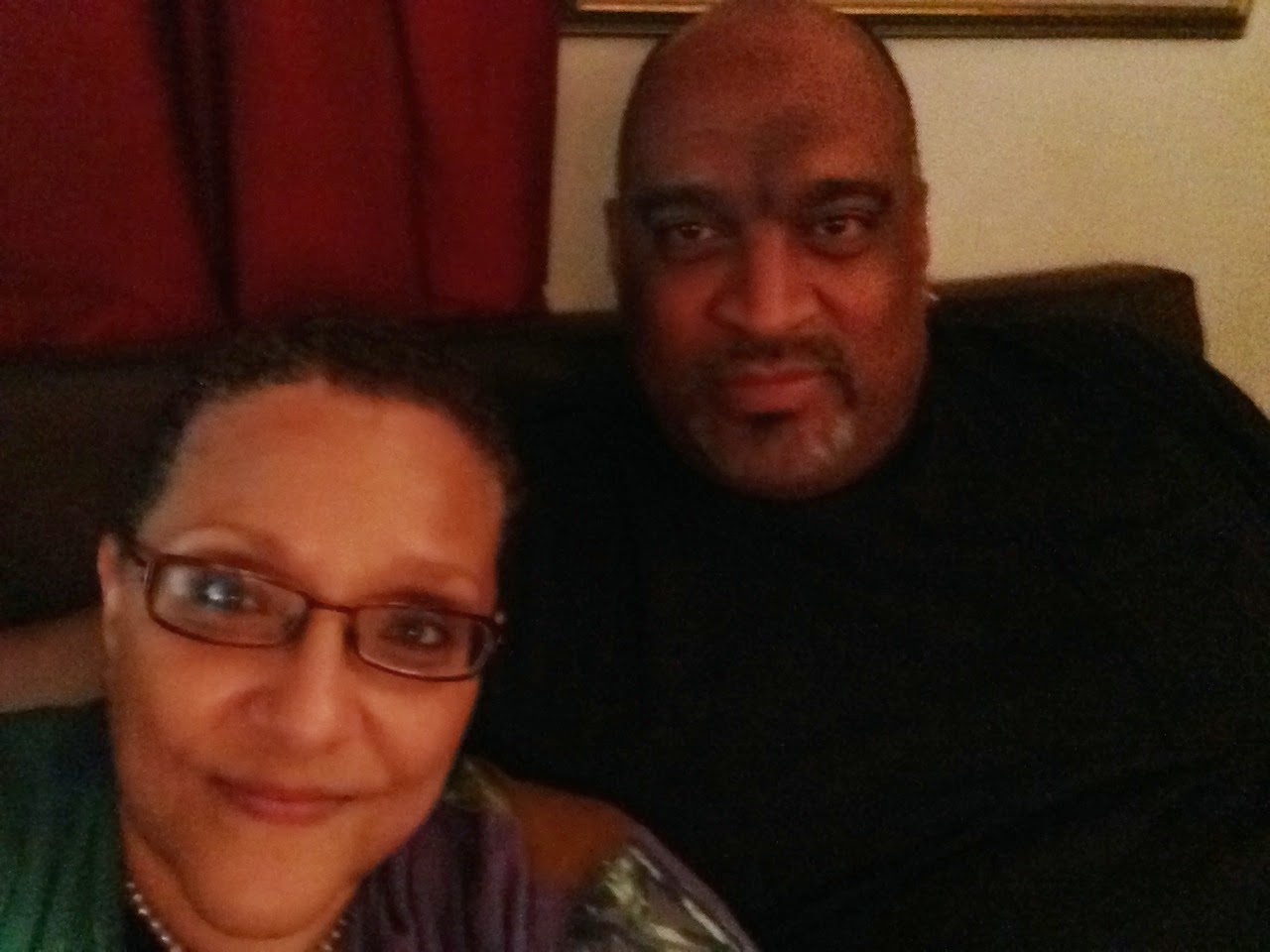 My darling man cooked the turkey, the mac and cheese, the broccoli in garlic and oil, the stuffing, the ham, the gravy—the feast! My son did the candied sweet potatoes, my cousin the potato salad, and I did the corn and cheese casserole. But there would be no Thanksgiving dinner without this man, who every year delivers to our table the most tender and moist turkey you have ever tasted! 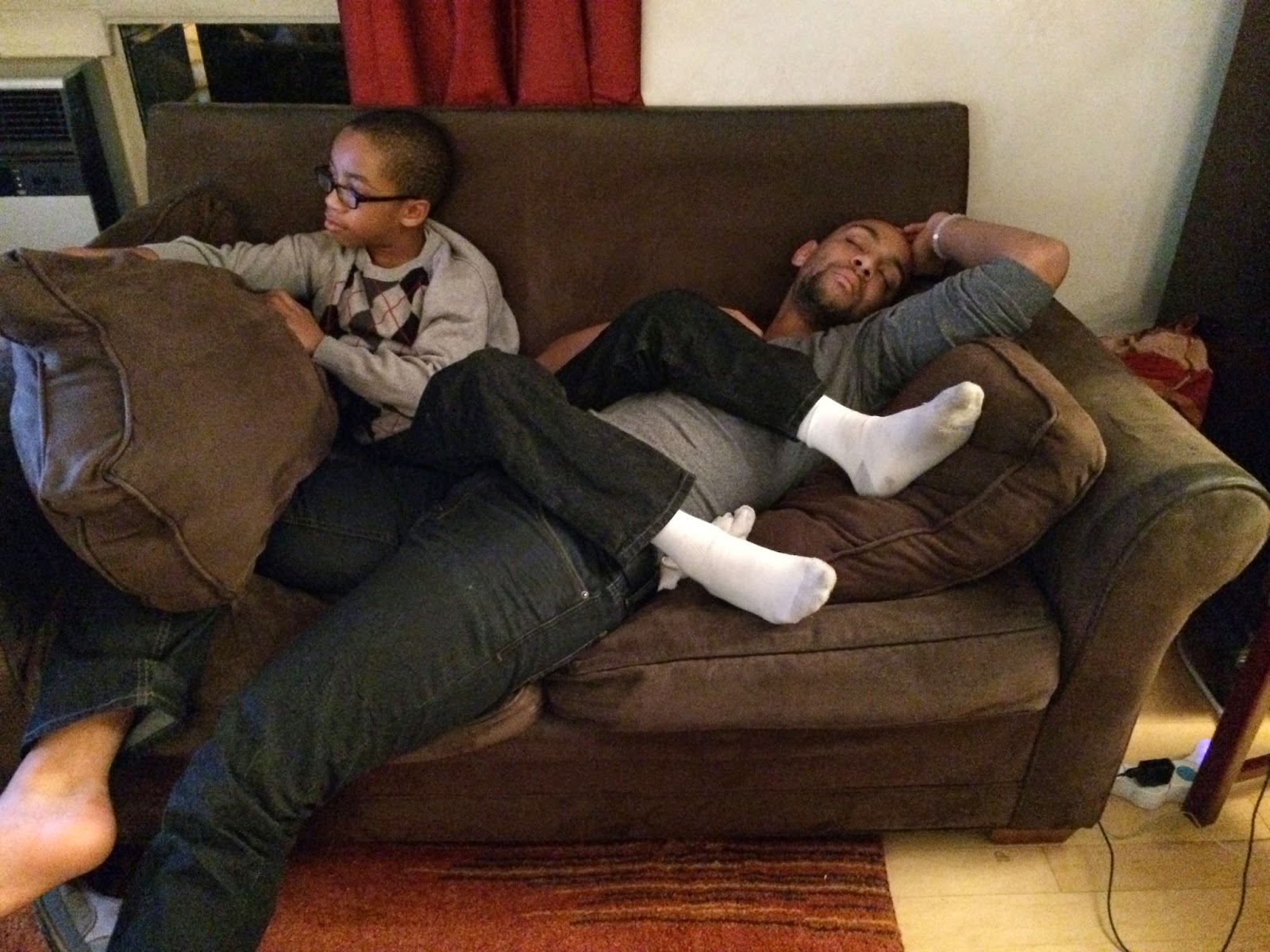 My son had partied hearty the night before Thanksgiving so at a certain point toward the end of the festivities he stretched out and went to sleep on the couch. His little cousin clambers over him and draped his legs across his chest and settled in to watch the football game while the party continued around them. People stayed until after midnight, and then my husband did the clean up while the rest of us pulled out comforters and pillows and figured out the puzzle of who was sleeping where. My son gave up his room to my niece and her friend and laid out his sleeping bag on the floor at the foot of our bed. Every other possible sleeping spot was taken.