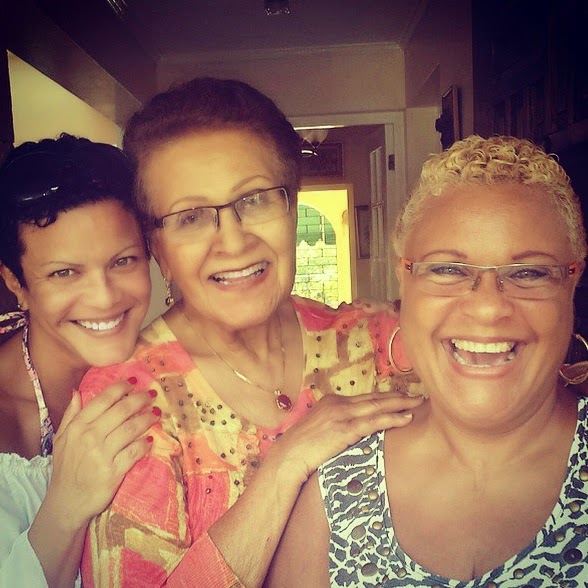 Aunt Grace arrived in Jamaica yesterday to spend the Christmas season with her daughter, the one of the right in the photo above. That's her granddaughter on the left, three generations of beautiful, strong, impressive women. My God, I love that picture of them, the joy in it, the connection. I am glad my mother's sister will be near to her during the holidays. I have been missing her sorely in the midst of our Thanksgiving weekend, knowing she is frail and alone in her mind in a sun-filled room in Kingston.

I feel emotionally fragile, which I think must show a bit because at odd moments people see something in my expression that makes them ask, "Are you okay?" I say I am, but there is something amiss, a mood I am absorbing from the air around me perhaps. My husband has been fairly silent since yesterday. Perhaps he is overwhelmed by the constant flux of people in and around our home. When he pulls in his light, I get emotionally shaky. I know this by now, and so I need to just breathe and ride it out. He's in survival mode I suppose. This is how he copes with the crowd. He looks forward to everyone being here over Thanksgiving, but then he withdraws after the day itself, and it's on me to run the entertainments. I don't think he realizes he does this. I'm only now getting conscious of the pattern myself.

There are other things at play. This is our first Thanksgiving without Aunt Winnie, with whom I have spent all but a very few Thanksgivings ever since arriving in New York for college at age 18. This year, there was no pressure to finish cooking dinner by a certain time she that we could take it over to her apartment at a decent hour and sit with her and her home attendant for a while. My cousin's husband is also gone from us, and we felt his absence keenly this year. My other cousin is feeling restless, and I fear she might be absorbing my mood. She's also suffering a bit of PTSD from when her daughter was hospitalized a year ago and they didn't have a clue what had gone wrong. I need to snap out of it, this dark mood encroaching at the edges, this thinking too much.

Maybe it's just the time of year, the march toward Christmas, and everything that I wish that cannot be, that will never be again. But my children; they are fine. My children seem to be in a good strong place. So there is that to be thankful for. Last night my son and several of his friends went out to celebrate the birthday of one of their number. Before he left he put his arm around his 11-year-old cousin who had pretty much been his shadow for the past two days. I heard him say to his cousin, "Okay, Jared, I'm heading out. You're the man of the hour now, just you and all these crazy opinionated women, but don't worry, you'll get used to it. That's how our family is. You'll learn to appreciate them." I shook my head and smiled and didn't say a word. My nephew beamed.