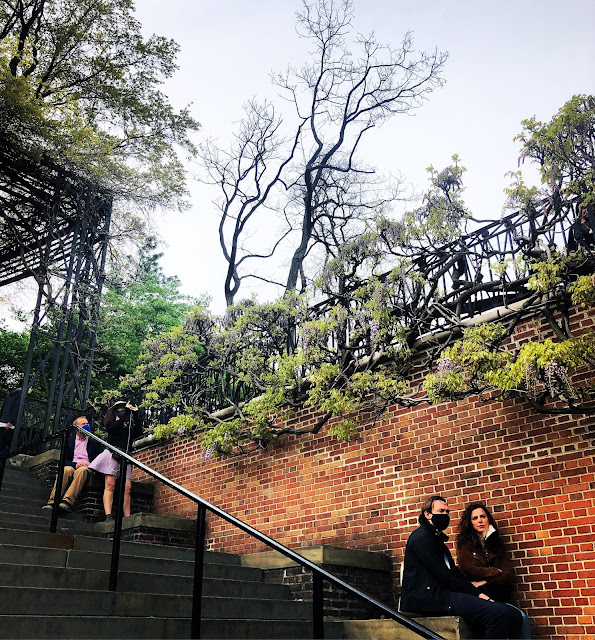 I met up two dear friends in Central Park's conservatory gardens on Sunday. It was so good to be with them outside. The park was crowded, as it was seventy degrees out and spring blossoms are starting to laden their branches. One of my friends had come from a psychology conference that morning on "whiteness" and she very much wanted to talk about it. She said she was frustrated at the ways in which white people fail to interrogate assumptions that their perspective is the only one. Even good white people, she said, often seem more intent on trying to prove they aren't racist instead of exploring the ways in which they might be. She is white herself, and she argued that white people need to acknowledge their privilege and sit with their shame. A discussion followed as to whether the recognition of white privilege must be accompanied by shame. I told her I'd settle for inquisitive awareness. 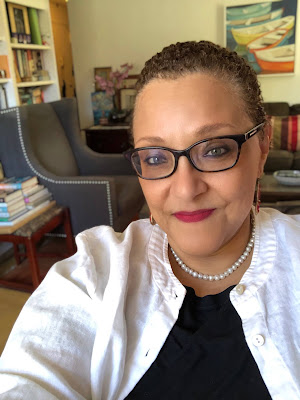 In other news, I had a second Zoom call for a possible new project yesterday, so I dressed all the way up again. Here's another picture of me Zooming. It is interesting to me, after a naked faced year, how different one looks with foundation and lipstick on. I have decided that I very much would like to be chosen for this work, though I will be at peace either way. I've shown up to the best of my ability, even if I've been thinking since our Zoom call of all the things I could have, should have said. Now the waiting.

When I was a child, my mother, seeing me become anxious in advance of social occasions, said to me in a voice like dappled light, "Dress yourself nicely my darling, and then just forget about yourself!" I still hear her in my head, and it's the reason why, as stressed as I get beforehand, once the engagement starts, I do forget about myself, it's showtime. Bless my dear mother for the gift she gave me, simple as her words might seem.

Meanwhile Black people continue to be killed by police, new deaths every day. I hear the names of the dead on the news and wonder if the case if an old one or brand new. I can't keep up. It is as if a mandate has gone out to police to execute Black people every chance they get, and they'll receive paid leave in return. It's no wonder I seem to have fallen into a social justice writing niche. It seems an important subject to engage in this moment. Honestly, the blatancy of racism in this country, from voting rights travesties to health and wealth gaps to police brutality, has become absurdly surreal.

Good morning, friends. We carry on.