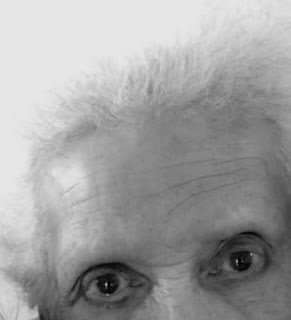 My aunt, the 92-year-old, is in the hospital. She fell on Saturday evening. Her home care attendant had gone to run her bath, and my aunt apparently forgot she couldn't just get up and walk around, so she got up and tried. She said she was on her way to her dresser to make sure that the money she had put there earlier was still in place. She fractured two ribs when she fell and is now in intense pain.

The social workers at the hospital want to send her to rehab at a nursing home. Her sisters are divided over whether that is a good idea. My mother thinks she will get better care in a nursing home, but she worries that by the time she's ready to be discharged her current home care attendants will have been reassigned. Another sister, who visited her in the hospital yesterday and who is a nurse, says that the best thing is for her to go straight home. I am inclined to agree. My aunt gets horribly disoriented in institutions. And she starts to hallucinate men with all sorts of nefarious intentions. I don't know where this comes from. Perhaps there are chapters of her life I don't know after all.

We are trying to figure out whether to call her daughter, the addict, who is finally living elsewhere, no longer in the home where she can harass and verbally abuse her mother for money. I don't know where my cousin has got to. I haven't spoken with her in weeks. I've wanted to call and see how she is doing, but I knew she would see it as a weakening of my resolve and would set about manipulating things from there. I just didn't want to get the whole sad carnival started again.

On the other hand, her mother is in the hospital and her face is beginning to collapse on its bones. The bridge of her nose is suddenly higher and sharper, her cheekbones more pronounced, her eyes sunken deep as small caves. When I walked into her hospital room this morning she was sleeping and I was struck my how much she resembled her brother in his coffin four years ago. I had never seen any particular resemblance before, but now it was marked. The sheets were drawn up to her chin and she was so small under the covers, so pale, her hair white and soft like feathers. When she opened her eyes, she looked as if she was trying to focus them, to figure out whether I was real or if she was still dreaming. She finally decided she was awake and fixed her supernaturally clear green eyes on me. She just looked at me and said nothing. Waiting. Trusting. I wanted to cry.

I gave her water and applied chap stick and rubbed lotion into the back of her hands. Then we sat looking out at Central Park, she has an expansive view of it from her window. She wanted to know how were the finances, and I assured her they were fine. We didn't talk much after that. We just sat there, breath in, breath out, and it felt as if I was sitting with only half of her, that the other part of her was already gone, floating somewhere in the next world, biding time.

After a while I coaxed her back to sleep, stroking her hair and whispering that I would come back this evening, which I knew would make her feel less abandoned, more willing to drift back into dreams. Then I came to work and made copies of all the paperwork that I need to submit this week to certify her for home care for another year.

As I collated the pieces of paper that represent the span of her life, from her birth certificate written in 1918 to her husband's death certificate two years ago, I couldn't help wondering how many more beats were left in the pacemaker that pilots her heart. And I couldn't help wondering if that foreign piece of machinery implanted in her chest was still in fact her friend.
Posted by 37paddington at 6:01 PM