The Bearable Lightness of Being 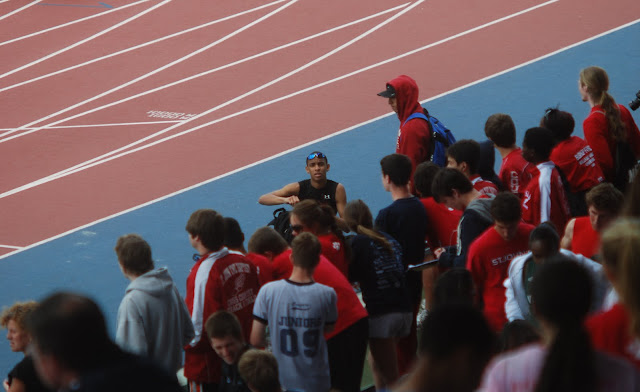 Our son is back in competition today, running in his first meet since rolling his ankle back in March. His trainers have judged it not yet strong enough to bear the impact of hurdles, so he is running the 100 meter and 200 meter races today, and also doing javelin. He is currently a pentathlete but his coach wants him to do decathlon, so he has been adding discus, shot put and pole vault to his arsenal. Trust him to be an all-rounder! It is so in his nature to want to cover all bases.
He called last night from Bethlehem, PA, where the team was ensconced in a hotel for the night before today's meet. He said he's been in a bubble all week, hadn't been checking the news, and only last night realized the government might shut down due to the budget impasse in Congress. "What the hell?" he said. "Can a government really just shut down? And what does that mean exactly?" So we talked politics for awhile, and generally caught up in a very pleasant convo.
He is letting himself draw closer to me lately. I think he no longer feels as overwhelmed by my visceral need to control and know and fix—traits I haven't always controlled very well. But it appears he has has finally slipped the knot, growing into the knowledge that really, he is the only one who can place his steps, no matter how much I might wish to help guide them. Mostly these days, I am able to just listen, which allows him to process out loud the twists and turns and choices he is facing. He is doing well, I think. He is definitely a fun-loving college student, but I think track gives him some boundaries, helps him not get too wild.
I asked him about Bethlehem, since one of the colleges we're supposed to look at for our daughter is there. I asked him had he seen any Black folks around, because I want my children to go to college in places that are racially friendly and socially progressive. He said, "No, I'm the only one I've seen so far, but we got here at night, so I'll let you know tomorrow how the town feels." How the town feels. I wish I didn't ever have to put my awareness to such things. As we talked more, realization dawned that he's the only student of color on the travel team. He's fine though. If ever there was a young man who could navigate his circumstances, that's my son. When he was a child, we used to call him "the ambassador" because of the natural way he converted strangers into friends anywhere we went.
I shared that his sister was going to be taking the ACT at his old high school this morning, the fabled Fordham Prep. He said he would send good vibes there for her. My husband drove our daughter there early this morning, and after he dropped her off in The Commons, he called me from the parking lot. "It's so familiar, as if no time has passed," he said. "I feel like I should know all the faces here, but there isn't a single one I recognize." He had tapped right back into how much we loved our son's high school, and how much of a community it was. Our son loved it, too. He made lifelong friends, there. It's a rare thing to feel so positive about any high school experience, but he managed it, and in retrospect so did we.
Here is photo of our boy and some of his high school track buddies. Our son is the cool dude with the sunglasses on his head. The boys were at a meet at Ichan Stadium in their senior year, just before they all scattered to different colleges. My husband went to almost every one of our son's high school track meets, but I didn't understand how fast the time would be gone. Looking back, I wish I had worried less about other things and watched him run more. 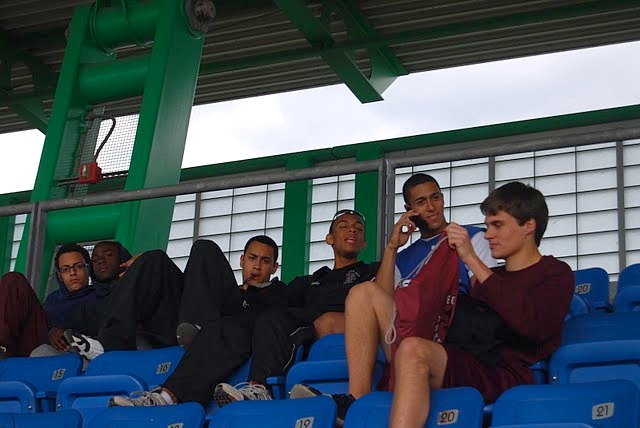