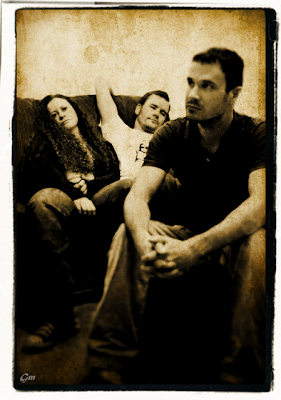 On Saturday night in New Orleans, we went to see the play Hugging the Shoulder, which asks the question, "Am I my brother's keeper?" as it follows a man's desperate effort to rescue his brother from the sinkhole of heroin addiction. The never published play, written by Jerrod Bogard, was masterfully directed by our own Glenn Meche, aka fellow blogger Bigezbear.

Glenn recognized my husband and me as soon he saw us. He was standing outside the theater as our cab pulled up, and as soon as we got out, he said, "I know you! You're from New York!" I so loved meeting him. You can just kind of tell he wears his heart on his sleeve and I can't resist that. I had this immediate urge to hug him but I didn't want to spook him. He was worried about what we'd think of the show. I hadn't meant to put him on the spot. I had thought to slip into the theater and tell him after, because I knew from his blog that he was nervous about the opening. On his blog, he wrote "I'm ransacked," and I certainly know that feeling. But how could I not go to his show, after reading his posts about directing it, and understanding that for him, this work was a labor of love.

Then when I saw the show was opening the very weekend we would be in New Orleans, I knew we would be in the audience. I just hadn't worked out how public we would be. But it was a small black box theater, an intimate place, there was nowhere to hide, and then I was glad of that, because afterward I got to hug Glenn and tell him how much I loved his play, how he need never have worried. I got to tell him how blown away we both were and he could see for himself that we were. His actors gave such heartrendingly nuanced performances my husband and I haven't stopped talking about them since. Glenn, my friend, this play is a brilliant piece of theater. It sticks to you, stays with you, climbs inside you and works all its angles raw inside you long after the theater goes dark.

The photographs here are by Glenn M. They show scenes from the play. The actors are Joe Siebert, Eli Grove and Liz Mills. Their talent is huge. The world should know their names. 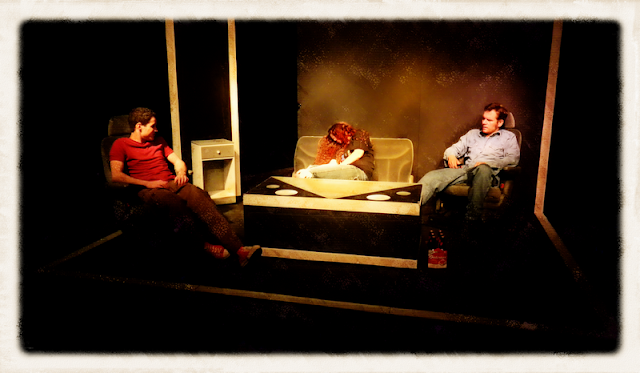