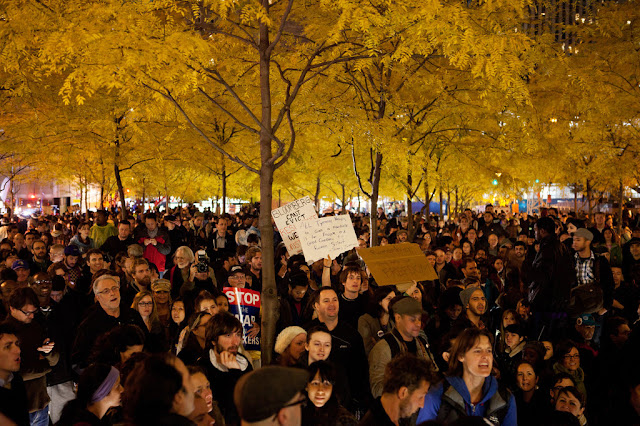 At 1 a.m on Tuesday morning, under cover of darkness, New York City cops woke the sleeping masses with foghorns and bright flashing lights and told them they had to clear out of Zuccotti Park, the birthplace two months ago of the Occupy Wall Street movement. They told the tent city of protestors that the park had to be cleaned and anything they did not take with them would be discarded. They told them that when the cleaning was done, they could come back to the park, but only during daylight hours and with no tents or shelter from the cold.

Officials had hoped the cold would have broken up the protests. They hadn't bargained on tents. And this week, they didn't bargain on the occupiers ability to adapt. "I feel like this is a beautiful moment to take back our streets, especially after the eviction," said a 27 year-old woman from Brooklyn. "We need to prove we can exist anywhere. It's gone beyond a single neighborhood. It's really an idea."

It's an idea that has taken root in the places where we hurt. By Tuesday night, occupiers were pouring back into the park. There was drumming and singing and chanting and choruses of "We Shall Overcome." Today, the protestors are holding a Day of Action, with plans to occupy, among other sites, selected subway stations. The movement is not going away. In fact, it's growing every day.

I was talking with a woman at work yesterday, and she complained that she didn't "get" the protests. What were they trying to achieve? How would they measure success? I suggested that they had already had some success, that their overarching goal was to change the national conversation, to force the media to cover the way 99 percent of us are really living, jobless, homes foreclosed on, inadequate health care, wages insufficient to cover our human needs, our political and health care systems hijacked by the deep pockets of investment companies and insurance giants.

She observed that the 1 percent are running businesses, and how can we expect them not to try to maximize profits? Yes, I argued, but they should pay their fair share of taxes on those profits, and underwrite health care that is conscionable at the very least. We agreed that the movement would probably continue to grow so long as the ranks of the unemployed continue to balloon in numbers. My friend said, but how do they expect to have any effect, it's so diffuse?

What about last week's elections, I asked her, in which the far right agenda took a drubbing? In Ohio, the effort to strip unions of their collective bargaining rights was defeated. Mississippi upheld a woman's right to choose. In Arizona, the senator who decided people who looked Latino could be stopped at will and asked for their legal papers, was voted out of office. And every morning on the news, I see coverage of an increasingly vibrant Occupy movement. This morning, in fact, the crowds have swelled by some 750 souls. The protestors are forcing a reckoning in the media and at the polls. And yes, I find it thrilling.