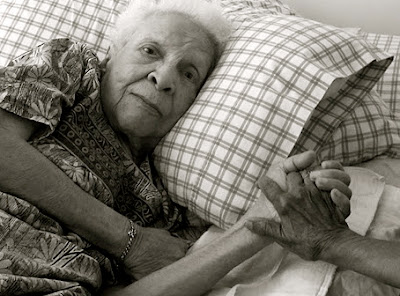 Their shoulders numb, the ache and stoop deeplocked
In their backs, the stretcher handles
Slippery with sweat. And no let-up

Until he's strapped on tight, made tiltable
And raised to the tiled roof, then lowered for healing.
Be mindful of them as they stand and wait

For the burn of the paid-out ropes to cool,
Their slight lightheadedness and incredulity
To pass, those ones who had known him all along.

—From Human Chain
by Seamus Heaney

Elizabeth posted this poem today, and it just sliced right through me. It made me think of Aunt Winnie, not about what others do for her now that she can no longer do for herself, but about what she did for us, the way she carried us, her brothers and her sisters and the succeeding generations of us, across oceans, down through the years, her shoulders aching with no let-up as she waited for a healing, and she's waiting still.

All she wants now is for us to care for her last remaining child, a woman adrift in a fog of substances, who's out there somewhere, no longer being carried on her mother's now stooped shoulders. My aunt seems not quite sad about her son's passing. She seems to feel a kind of peace at the idea that she will see him soon on the other side. She won't have to leave him here, undefended. But her daughter, that's another story.

I wish we could repay her for everything by snatching her woman child back from the pit of addiction, brushing her off and standing her up, shiny and new at her mother's bedside. I wish I could do this for my aunt before she dies. It is the only desire she has left, to know that her last living child will be saved.