Sinking under the waves, overly sensitive to imagined slights, raw and naked and hiding from the light.

I have been reading but not commenting. I hope you'll bear with me. The words are stuck, as if frozen into a solid block, refusing to arrange themselves in coherent thoughts.

A woman is on the television screen talking about corporate greed. She marched with the rest of the Occupy Wall Street protesters to Goldman Sachs yesterday. Also yesterday, the corporation I work for released third quarter earnings that were through the roof of their expectations. And yet we have not rehired a single soul since the six successive layoffs of the past five years. We are beyond cut to the bone. We are a chair with two sawed off legs, manic and hopping, about to tumble. This cannot be sustained.

Forgive the wildly mixed metaphors. And the hopping chair.

We are all on the mend from that nasty flu that blew through our house. That's something.

Here's something else. Our daughter's soccer team played their hearts out at the championship finals in the slicing cold Monday night. The two highest scoring teams in the league completely locked each other out of scoring. They took the game into double overtime, then a heart-stopping sudden death round, and still no score! God, they played hard. My daughter was fighting the flu and yet she was on the field almost the entire game, clearing that ball with her powerful defensive kick, racing to the ball, refusing any quarter. Finally, they lined up for penalty kicks. One of our kicks missed, and that was the game. 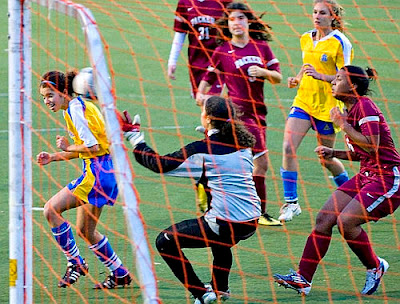 Our girls were heartbroken, but the girl who missed the kick has nothing to be ashamed of. Her game was awesomely powerful! With great admiration, my daughter calls her The Wall.

This photo was in the New York Daily News. That's my baby on the right. They saved this goal, but the photo gives you an idea of how hard each team pressed and how constantly our hearts were in our throats.

After the game, some of our daughter's teammates ran over to my husband and me and instructed us to keep her home tomorrow because she was really sick. I know she was, but she refused to not play. She refused to let her team down, and she didn't.

I did keep her home the next day. I stayed home with her and we had a wonderful cozy hidden-from-the-world day. That was definitely more than something.