In this month of March in the year 2012, it is impossible to avoid race as a social construct and its toxic place in our lives. Trayvon Martin. The Republican primaries. And now, The Hunger Games. Seems a lot of moviegoers were appalled that the characters of Rue, Thresh and Cinna were portrayed as Black.


In the book, when we first meet 12-year-old Rue, we are told, "She has dark brown skin and eyes" and is very small in stature. Anyone who noticed that description would say the casting of Amandla Stenberg, who stole the show in the action flick Columbiana, was perfection.


Author Suzanne Collins wrote the other District 11 tribute Thresh, played by Dayo Okeniyi, as having "dark brown skin," and did not specify skin color for the character of Cinna, the Capitol stylist played by Lenny Kravitz. It's a little stunning to discover the degree to which the casting of these characters rattled some folks. Consider the tweets that scrolled in. 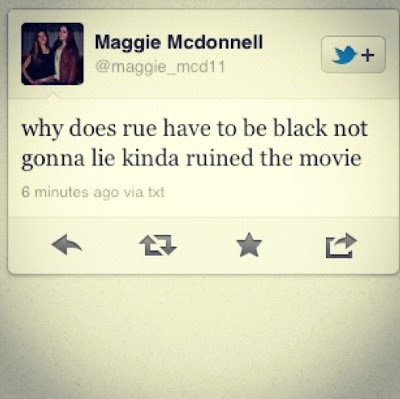 Lest you think these sorts of tweets were arriving in dribs and drabs, one news organization was nice enough to do a compilation, so we could see the sentiment was quite widely felt. 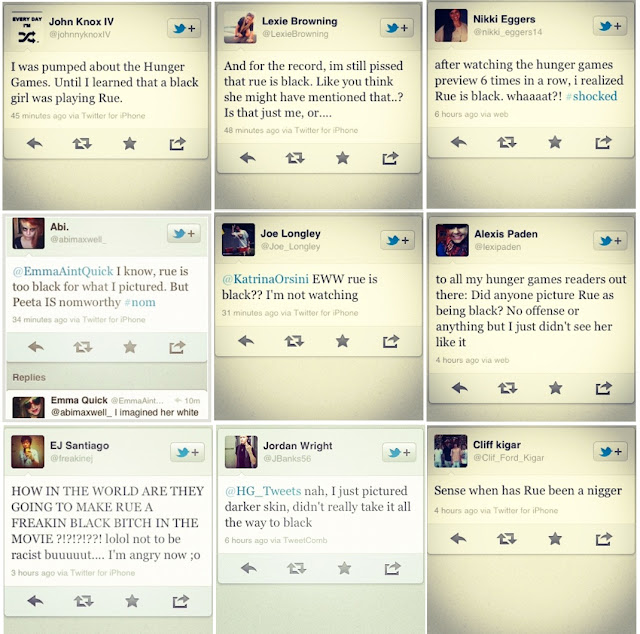 The website Jezebel helpfully noted: "These people are MAD that the girl that they cried over while reading the book was 'some black girl' all along. So now they're angry. Wasted tears, wasted emotions."

An interesting aside: Katniss, the main character in the book, was described as having "straight black hair" and "olive skin." Many people imagined her as Native American, but blonde-haired, blue-eyed Jennifer Lawrence won the part. No one tweeted complaints about that (although though there was some snark about her not being skinny enough—I could do a whole other post about that). But there was this tweet, in response to all the madness. Now you know. 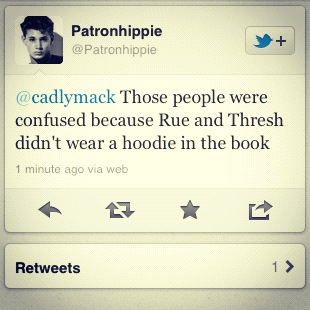