Choice in the Matter

So many things are swirling around in my brain, I may not have any luck organizing them into coherence today. But in no particular order, here goes.

1) Layoffs happened yesterday. I was not laid off but the mood was somber all through the building, as the axe fell again and again on the unsuspecting. People huddled in offices, talking in hushed tones or they kept to themselves, heads down, working. Today we begin the task of figuring out how we go on.

2) Susan Landry on her blog Pie wrote about walking all over Cornwall, England alone, and all over the South of France on another walkabout, and it sounded like the most divine adventure to me. And then I thought, as a Black woman alone on the trails, in this place or that one, would I be safe? And how I hate having this thought at all, and the way it can stunt my dreams. Because of course, I can make another choice. I think sometimes I've been in New York for too long at a stretch, immersed in the reflex of big city security, and immersed too in this racially charged political climate, at the center of it as a journalist, and I forget that some years ago I went alone to the Falkland Islands at the southernmost reaches of the globe, where no Black person had ever been seen by the few hundred residents of British colonial descent, and I walked the moors, just me and the sheep and my notebook and camera, and along the coast I wandered over broken ships from the age of sail for two weeks, reporting a story on shipwrecks, and felt perfectly safe in my skin. I need to remember this.

3) Aunt Winnie is so very old and curled in on herself now, like a rail thin contraption, folded small. At 94, robbed of her faculties by Parkinson's and perhaps also by grief, all she can do is lie there, making unintelligible sounds, most of which sound like labored puffs of air. The home attendants turn her as often as they can manage, because her skin is like tissue that disintegrates so easily if any part of it comes in contact with any other surface for too long. Uncurling her contracted fist yesterday and holding it in my own, I felt so helpless in the face of her incapacitation, the way she is locked inside herself, and even though I tell myself she is giving us all an opportunity to serve her, affording us the privilege of doing for her, I still know that if she had any choice at all in this matter, she would not endure the prison of her hospital bed a moment longer. I am sad she does not have a choice. 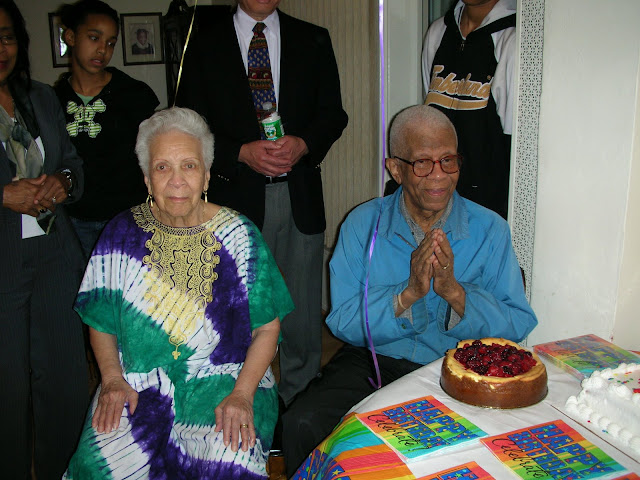 This photo was taken just seven short years ago. How the world can change in seven years.