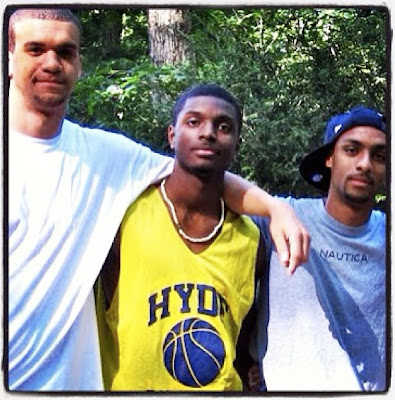 The photo here is of my son and two of his closest friends, boys he has called brothers since they were children. They have grown into good and responsible men, all three—but too many people can't see that when they look at them. All they see in a young Black man is a suspect, not a future doctor, lawyer or architect. Not a young man who wants to be a firefighter and who might one day save their lives.

I realize that many who are not parents of Black boys may not understand the sorrow and frustration I feel over the not guilty verdict for the man who took Trayvon Martin's life. Most days, I don't dwell too much on the fact that the Black males I love are forever unsafe in this world where I have chosen to raise my children, because that was as true before Trayvon's death as now. And until this morning I have held at arms length the memory of the afternoon during homecoming weekend in my son's sophomore year when a White cop walked through a crowd of students, all but two of them White, and stopped in front of my son. The cop poked my Black boy in the chest, and said, "What the fuck are you carrying?" My son mercifully remained calm. He said, "Nothing. Feel free to look." He had only his wallet and ID card on him, and a roll of toilet paper because the group was heading from one house to another for homecoming weekend parties and his friend at the house they were going to had asked him to bring a roll from his house as they had run out.

The cop took my son's wallet, cursing all the time, and told him to turn around. He handcuffed my son, and pushed him roughly into the squad car. My son said, "Excuse me, officer, but can you tell me why I am being detained?" to which the cop said, "Shut the fuck up." Fortunately, my son's friends erupted, screaming at the cop that that was the most racist thing they ever saw, taking down the cop's name and badge number, because as White students they could do that without fear of retaliation. Eventually the cop opened the cruiser door and told my son to get the fuck out of the car. He still held my son's wallet and ID in his hands. He studied the ID and said, "So you're a student?" My son nodded. The cop then undid the handcuffs he had locked around the wrists of my beloved child, threw the wallet and ID on the ground, and spat, "Get the fuck out of my face."

My son knew to wait till the cop had got back in the cruiser and driven off before picking up his belongings. His friends swarmed around him. "How are you not seething with rage right now?" they asked him. And my son said, "If I walked around as a Black man seething with rage, that's when trouble would really jump off." And he's right. I still shudder to think what would have happened if my son in a fit of adolescent bravado (he was 19 then) had resisted that cop. Trust me when I tell you that is what the cop was hoping for. And I still shudder to think what would have happened had the cop actually taken my son to the precinct house, away from his friends, away from White witnesses who could not believe what they had seen. I think those outraged kids saved my son from much worse that afternoon. And I think that cop also afforded them a rude education.

So yes, I am going about my day doing what is before me to do, which by the nature of the work I do includes engaging professionally with the fact of George Zimmerman's not guilty verdict. But on Morning Joe this morning Mika Brzezinski read from a column that the Washington Post's Eugene Robinson wrote today. It said in part:

"We know how frightened our sons would be, walking home alone on a rainy night and realizing they were being followed. We know how torn they would be between a child’s fear and a child’s immature idea of manly behavior. We know how they would struggle to decide the right course of action, flight or fight.

"And we know that a skinny boy armed only with candy, no matter how big and bad he tries to seem, does not pose a mortal threat to a healthy adult man who outweighs him by 50 pounds and has had martial arts training (even if the lessons were mostly a waste of money). We know that the boy may well have threatened the man’s pride but likely not his life. How many murders-by-sidewalk have you heard of recently? Or ever?

"The conversation we need to have is about how black men, even black boys, are denied the right to be young, to be vulnerable, to make mistakes. We need to talk about why, for example, black men are no more likely than white men to smoke marijuana but nearly four times as likely to be arrested for it—and condemned to a dead-end cycle of incarceration and unemployment....

Trayvon Martin was fighting more than George Zimmerman that night. He was up against prejudices as old as American history, and he never had a chance."

And now, as I write this, Eugene Robinson and Michael Steele, Liberal and Conservative, are standing on the same ground, describing with one voice the talk each of their parents had with them when they were just young boys, explaining to them what it meant to walk out their front doors as Black males in America, how they should behave if stopped by a cop, what they should understand about how people would react to them.

My husband and I had that talk with our son, too. Every parent of a Black boy has had or will have that talk, because not to do so is to endanger the life of their child. My son is a runner, a decathlete. I remember telling him when he was in high school to run on the track at his school and not in the park or on the street, because a Black man running is forever a suspect in the eyes of a cop.

So this morning, as I listened to words written by a Pulitzer Prize winning columnist for a major newspaper, and realized that for all his accomplishments he was just another endangered Black male, the tears came. It was a release.