I am so clearly one who cannot move past an emotion, who remains mired in the muck of despair, until I can process it by writing it out. If I can write down what I am feeling, or at least try for as close an approximation of it as possible, I am healed. It really is almost as if the clouds part and the harps play and the light shines through. My step is lighter, my shoulders lift, I have hope and laughter again.

That is how it was yesterday after I wrote that post, setting down the frightening event of my own son, innocent of any wrongdoing, being stopped by police. I felt so much lighter after writing it down, and after that good cry I allowed myself. Today we humans seem more like a sad, lost bunch than the source of pernicious danger at every turn (and maybe pernicious danger is redundant or maybe it just multiplies the threat). Around some corners there is real danger, this is still true. But around other corners, there is goodness, compassion and love.

There are, in fact, many reasons for the anguish those who love Black boys have been feeling, but the reason this case has been felt so differently is that Black parents knew how to prepare their sons for confrontations with cops, but what do you tell you child about a civilian stranger following you in the night? Trayvon apparently told his girlfriend that he was worried the stranger wanted to rape or kill him, but he didnt want to run to his house because he didn't want to bring the danger home to his little brother. So what do you tell your child to do in such a situation? Do you tell him to run? To turn and face the stranger? To defend himself at all costs? What?

Someone on Anderson Cooper last night said Travyon should have just called the police, dialled 911 on his phone. That comment plumbs the depths of what is not understood outside of Black families, that you don't call the police, because when they arrive, you will be the first suspect they see, the first one they shoot. Study after study has shown this. So what do you do? Clearly the stranger danger talks we are told to give our children won't work, because if a Black boy runs, he is assumed to be guilty of something and might get shot. If he stands his ground, tries to defend himself, as Trayvon Martin apparently did, he might end up dead.

This is why Black families are so lost in the wake of this verdict. What on earth do we tell our children now? I don't have an immediate answer to that, but I do know we have to counter the stereotype of our boys as dangerous, as suspects. We have to replace them with positive images of Black boys and young men sewn in to their families, productive, creative, laughing, valued, loved.

The photo below is of artist Robert Trujillo of Oakland, holding his young son in front of a painting of Trayvon Martin that he is working on in the wake of Martin's killer going free. These are the kinds of images we need to put out there. This is the truth of who Black men are. Loving fathers and family men. Creative beings. Productive citizens. That other stereotype from TV crime shows and Stop and Frisk programs, it's a flat out lie designed to invade your nightmares. And it is killing our boys. 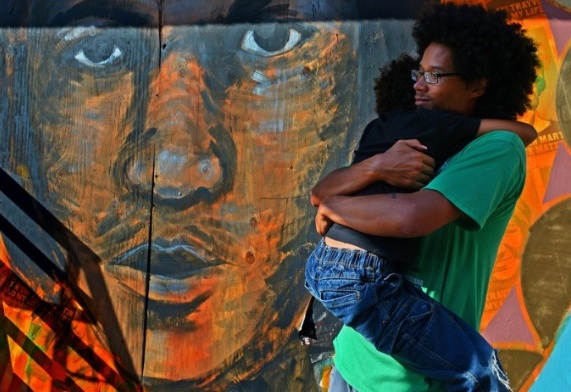 Susan T. Landry posted a contextualization of the Zimmerman case and our response to it today. It is extraordinarily comprehensive and can be found here.